END_OF_DOCUMENT_TOKEN_TO_BE_REPLACED

A key piece of the economic puzzle...

WE BEGIN with a couple of unusual charts – unusual because they contain no reference points, writes David Galland of Casey Research.

Here's the first. As you'll note, something occurred that triggered a waterfall slide in the chart. We'll get to what that triggering event was in a moment. 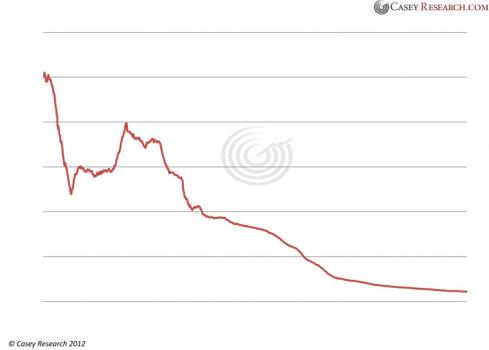 And here's the second. In this case, again it's clear that something triggered the chart line to do the equivalent of a moonshot. 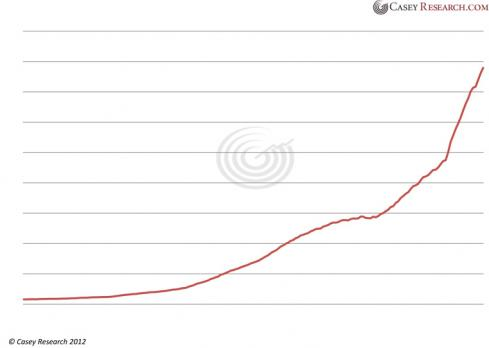 We'll return to those charts momentarily. First, however, a confession.

As much as I read, and despite interacting with very smart people on a daily basis, until just recently I have missed something about our economy that, on reflection, should have been as obvious as the computer screen I spend far too many hours staring at.

Allow me to emphasize the point in somewhat stronger terms.

That I could have overlooked this particular aspect of the US economy and the overarching consequences that follow from it for all these years should, if I were a lawyer, cause me to be disbarred. If I were a doctor, the medical practice board would be entirely within their rights to revoke my license. If I were a politician, my benefactors would be entirely justified in cutting off my bribes donations. If I were a... well, you get the idea.

Interestingly, as smack-up-the-side-of-the-head obvious as this feature of the economy is, and has been for years, virtually everyone else has failed to spot it as well.

So, what is this mystery?

Succinctly, it is that, like Europe (where, during my recent trip there, the spark of awareness was lit), the economy of the United States is – and has been for decades – increasingly under the control of central planners at the expense of the free market.

As proof of that contention, we return to the two charts above. Here again is the first, but with the contextual reference points in place. 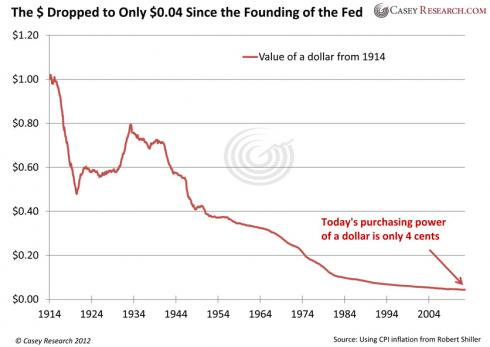 As you can see, the chart tracks the purchasing power of the US Dollar since 1914, the year that the government, through its stooges at the Fed, took command of monetary policy. Laughably, the stated mission of these central planners was to preserve the value of the Dollar. Predictably, exactly the opposite resulted.

And here's the second chart, also with the reference points in place. 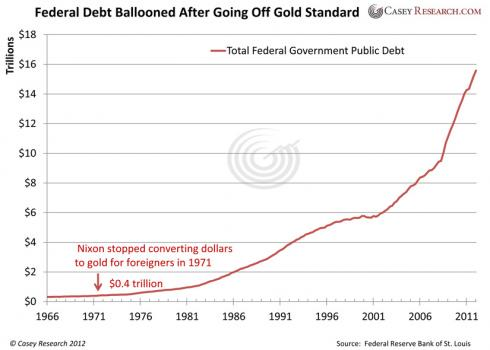 As you can so clearly see, after severing the last connection with the gold standard in 1971, after which point the central planners took command of fiscal policy, we have seen an exponential growth in government debt.

(Of course, the numbers on the national debt are grossly understated as it doesn't account for the tens of trillions of Dollars of unfunded and unpayable obligations tied to Social Security, Medicare, and so forth.)

The point is that the economic model that allowed the United States to rise out of abject poverty at its inception to become the most powerful economy the world has ever seen has been tossed aside in favor of a model that has proven time and again to be fundamentally flawed and always doomed to fail.

That the central-planning model, here and around the world, has been advanced by a fiat global reserve currency is undeniable. However, as the two charts clearly show, the consequences of having central planners controlling monetary and fiscal policy have created a ticking time bomb set to explode.

A few additional comments are warranted.

The first has to do with who the central planners actually are. And the best way to understand that is by considering who they are not.

Instead, the central planners almost always hail from the halls of academia, their stock and trade consisting entirely of a college degree and a façade of really knowing what they talk about. As a friend likes to say, "The biggest problems in this world are not caused by a lack of knowledge, but by people who pretend to know when they don't."

Over the years I have met and even gotten to know people who have gravitated toward jobs involved with setting government policies. And to a person, they have never held a real job outside of academia, or if they did, they failed at it. Yet they are unhesitant in telling everyone who will listen in tones most professorial how the world should work and why enlightened government policies – not the free market – are the only answer.

These people have taken over our country and, in fact, the world. The current mess we are in should not be a surprise to anyone. All anyone has to do is look at the history of the Soviet Union or communist China, pre-economic liberalization, to see how the story of command economies ends. How it always ends.

So, where do things go from here?

Earlier today I dropped an email to our editors, which I will quote from here as it deals with what I see as the fate of the global economy over the next six months or so.

"It's all about the debt.

"The sovereigns owe a lot of money that they can't repay. As they try to roll over their existing debts and have to borrow more, the lenders – if any can be found – will want higher and eventually unaffordable interest rates. When the lenders dry up, the only solution will be for the central bankers to monetize, but the world will be watching closely, so this will likely trigger a death spiral in the fiat currencies.

"There are intractable problems on a fundamental, systemic basis that cannot be resolved in an orderly fashion. The day is coming when the lending locks up again, after which point everything starts to fall apart.

"So, no, I don't think it's a muddle by outcome, but a systemic crash... hopefully big enough to cause a rethink about the entire current setup with funny money and central economic planning.

"But that would take a very big crash."

Now, I know that a lot of Casey Research subscribers, having accepted our arguments for including tangible assets as a core portfolio holding for many years now, have struggled during the latest retracement and consolidation period in the precious metals and associated stocks.

But if you step back and look at the big picture as it is constantly revealed in the headlines and regular releases of poor economic data, I think the conclusions we came to back before the crisis hit, that the Fed (and all the central bankers) are stuck between a rock and a hard place, remain the correct conclusions.

There is no simple or easy way out of this situation as the central planners are forced into a haphazard and highly destructive retreat. And the consequences won't just be economic or political...

So, how does one cope in a command economy headed, like all its predecessors, into the trash bin of history – in this case, on a global scale?

First and foremost, diversify. Everything contains risk, so spreading it around to mitigate the chances of getting hit especially hard from any one investment sector makes a lot of sense.

The idea is that if any one area becomes overweight or underweight, I look to make adjustments. In addition, I set certain goals – for example, the percentage of our net worth we want outside of the United States – and manage to that number.

In short, pay close attention to where your assets are allocated and don't go overboard in any one sector.

Secondly, skew toward things tangible. Over the next few years, we are going to see massive dislocations as the fiat currency system cracks apart, starting with the Euro and then, after a final rush into the "safe harbor" of the US Dollar, spreading to the Dollar itself.

As much as possible, own things with a tangible value. Precious metals are fine, but don't go overboard as that makes you susceptible to a change in government regulations that could literally be invoked overnight. Consider property and even income-producing property (in low-tax jurisdictions). But, again, don't go overboard because real estate is always a fixed target, which means the government can tax it or even confiscate it, and you won't be able to do much about it. Owning currencies of countries with large resources is a proxy for owning something tangible, though an imperfect proxy.

Be careful. It will only get more challenging to build net worth going forward. Whether it be higher taxes on capital gains (a certainty at some point) or the cancellation of tax breaks, or more demands on business owners from legislation such as Obamacare, generating – and more to the point, keeping – net worth will not be easy. Therefore, rule number one has to be to avoid risking big chunks of money.

Get the safest gold – stored in your choice of US, UK or Swiss vaults – and pay the lowest price possible with BullionVault...