END_OF_DOCUMENT_TOKEN_TO_BE_REPLACED

Or, what little M0 said to big M4 about UK money supply...
I RECENTLY wrote for Save Our Savers, attempting to square the massive expansion of Britain's monetary base since March 2009 with the fact that inflation has now been within the Bank of England's target range of 2%...plus or minus 1 percentage point...since June 2012, says John Phelan at the Cobden Centre.
Here I'd like to expand a little.
Since March 2009 Britain's monetary base, also known as narrow money or M0, has increased by 321%. We can see that the majority of this is in the form of increased bank reserves, up 642% since March 2009. 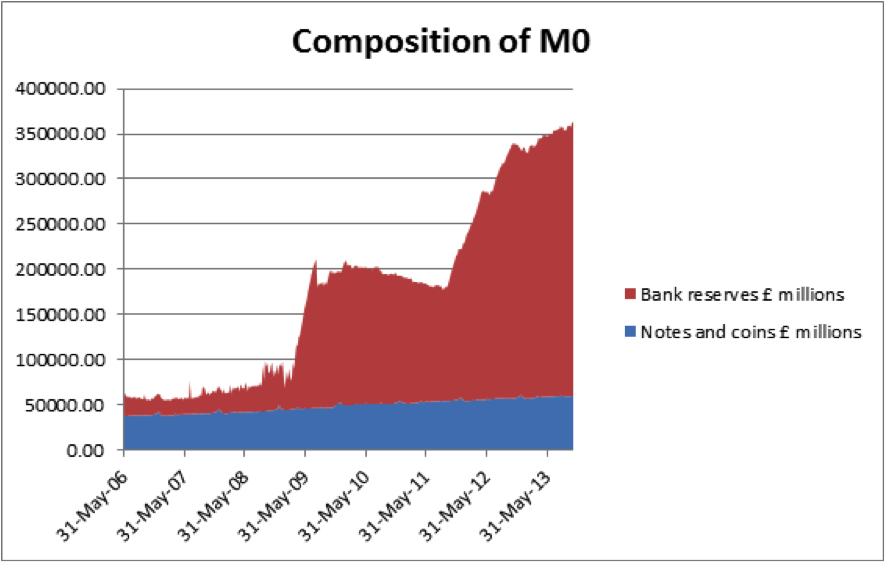 This is just what we'd expect to see following the Bank of England's Quantitative Easing, where the Bank creates new money and uses it to purchase bonds from banks. That new money becomes bank reserves.
The banks have since sat on that money (not using it as a basis for new credit creation and feeding into bank deposits) which is why, while narrow (M0) money has exploded, broad (M4) money has barely budged, increasing by just 7.4% since March 2009. 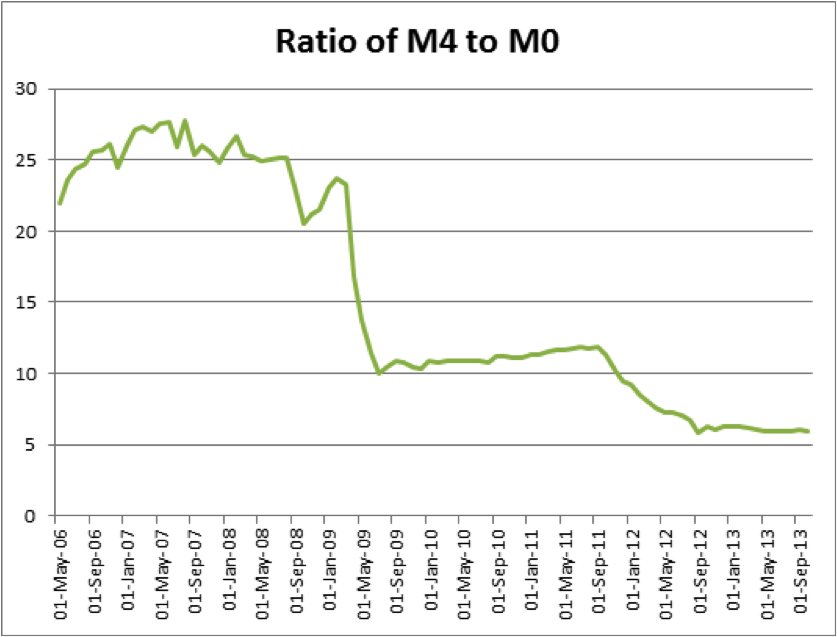 The chart above shows the ratio of M0 to M4 since May 2006; how many pounds of broad money each pound of narrow money is supporting. From 25:1 between May 2006 and March 2009, it slumped via successive bouts of Quantitative Easing to about 6:1 since September 2012.
Now, on the one hand banks might stick to this new, lower ratio. Chastened by their experiences with mortgage backed assets they might desire a permanently lower reserve to asset ratio and all QE will have been is a vast recapitalisation of banks.
On the other hand, as 'recovery' kicks in they might start to increase their reserve to asset ratio. They might not scale the giddy heights of 25:1 again, but they will be multiplying out from a monetary base which has tripled in size. Britain's monetary base is now £362 billion and M4 is about six times that, £2.2 trillion. But if renewed confidence in the banking sector saw banks return to higher ratios, the resulting M4 figures would be as follows:
Here, we are told, the Bank of England will be able to 'drain' this liquidity from the system. It would do this by reversing QE; selling bonds to banks and effectively destroying the base money it receives in return. But a massive increase in the supply of bonds relative to the demand for them will lower their price. This is the same as raising their yield and this is the same as raising a key interest rate.
It is worth pondering for a moment the scale of bond sales and consequent rise in interest rates which might be necessary to drain this base money from the financial system. We must hope either that the economy can stand it or that banks keep holding these reserves.