END_OF_DOCUMENT_TOKEN_TO_BE_REPLACED

China has reached 'peak debt'. What follows is...

The DANGER lurking in the risk asset markets was succinctly captured by this MarketWatch post on overnight action in Asia, writes David Stockman – a two-term Congressman from Michigan and formerly Director of the Office of Management and Budget under President Ronald Reagan – in Addison Wiggin's Daily Reckoning.

It proved once again that the casino gamblers are incapable of recognizing the on-rushing train of global recession because they have become addicted to "stimulus" as a way of life:

"Shares in Hong Kong led a rally across most of Asia Tuesday, on expectations for more stimulus from Chinese authorities, specifically in the property sector...The gains follow fresh readings on China's economy, which showed further signs of slowdown in manufacturing data released Tuesday (which) remains plagued by overcapacity, falling prices and weak demand. The dimming view casts doubt that the world's second-largest economy can achieve its target growth of around 7% for the year. The central bank has cut interest rates six times since last November."

More stimulus from China? Now that's a true absurdity – not because the desperate suzerains of red capitalism in Beijing won't try it, but because it can't possibly enhance the earnings capacity of either Chinese companies or the international equities.

In fact, it is plain as day that China has reached "peak debt". Additional borrowing there will not only prolong the Ponzi and thereby exacerbate the eventual crash, but won't even do much in the short-run to brake the current downward economic spiral.

That's because China is so saturated with debt that still lower interest rates or further reduction of bank reserve requirements would amount to pushing on an exceedingly limp credit string.

To wit, at the time of the 2008 crisis, China's "official" GDP was about $5 trillion and its total public and private credit market debt was roughly $8 trillion. Since then, debt has soared to $30 trillion while GDP has purportedly doubled. But that's only when you count the massive outlays for white elephants and malinvestments which get counted as fixed asset spending.

So at minimum, China has borrowed $4.50 for every new Dollar of reported GDP, and far more than that when it comes to the production of sustainable wealth. Indeed, everything is so massively overbuilt in China – – from unused airports to empty malls and luxury apartments to redundant coal mines, steel plants, cement kilns, auto plants, solar farms and much, much more – that more borrowing and construction is not only absolutely pointless; it is positively destructive because it will result in an even more costly adjustment cycle.

That is, it will only add to the immense already existing downward pressure on prices, rents and profits in China, thereby insuring that even more trillions of bad debts will eventually implode. And that, in turn, will prolong the CapEx depression, which is the inexorable flip-side of the credit driven investment spree that has so massively bloated and deformed China's economy.

In short, the kind of dead cat bounces like those registered in the Asian bourses last night have virtually nothing to do with prospects that the unfolding global recession can be reversed by central banks or other state fiscal actions. These mini-rallies are entirely financial spasms triggered by the vestigial algorithms of robo-machines and chart-point chasing day traders.

But that is exactly why bubbles eventually splatter. When peak debt is reached, additional credit never leaves the financial system; it just finances the final blow-off phase of leveraged speculation in the secondary markets.

Indeed, what is happening now is that the herd of buy-the-dip speculators is being pushed into a narrower and narrower slice of the market. A few weeks ago we pointed this out with respect the quartet of FANG stocks:

"In fact, there were some fireworks in last week's gains, but if history is any guide they were exactly the kind of action that always precedes a thundering bust. To wit, the market has narrowed down to essentially four explosively rising stocks – the FANG quartet of Facebook, Amazon, Netflix and Google – which are sucking up all the oxygen left in the casino.

"At the turn of the year, the FANG stocks had a combined market cap of $740 billion and combined 2014 earnings of $17.5 billion. So a valuation multiple of 42X might not seem outlandish for this team of race horses, but what has happened since then surely is.

"At this week's close, the FANG stocks were valued at just under $1.2 trillion, meaning they have gained $450 billion of market cap or 60% during the last 11 months – even as their combined earnings for the September LTM period were up by only 13%."

This means that the FANG stocks were driven to a price/earning ratio of 60 as the gamblers piled on the last trains out of the station.

Yet after 27 failed attempts to rally, including today's low volume melt-up, the modest rebound of recent weeks is surely just another spasm of the dying bull. 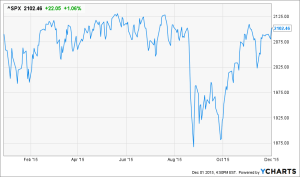 That's especially the case coming as it does on the heels of a flood of negative domestic economic news, the onset of the fifth recession in 7 years in Japan, more cratering of credit and industrial activity in China, another plunge lower in Brazil that Goldman has described as an outright depression, continued severe pressure on exchange rates and credit markets in the DM and the specter of a Thermidorian Reaction to the Paris terrorism events in Europe.

Indeed as the old Wall Street adage holds, market tops are a process, not an event. Another peak under the hood of the S&P 500 index, in fact, reveals exactly that.

It turns out that the Tremendous Ten mega-stocks listed in the chart below currently have a combined market cap of $3.76 trillion. That's up by the considerable sum of $440 billion or 14% since the start of 2015.

But what is not up is the net income of the group as a whole. It weighed in at $158 billion for the 12 months ending in September, and that's down by 17% from the $190 billion of net income the Tremendous Ten posted for the LTM in December 2014. 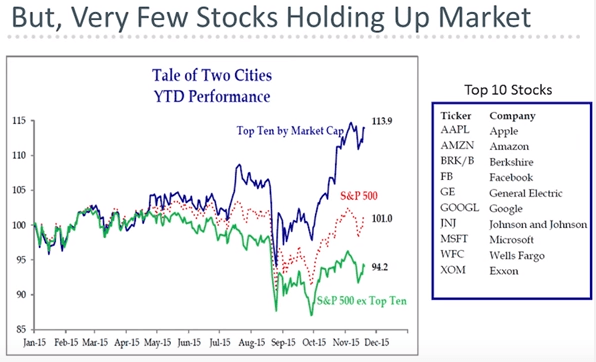 Yes, there are cross-current within the Tremendous Ten. Google's earnings are up a respectable $2 billion or 14% during the last nine months, while Exxon's are down by $12.5 billion or nearly 40%.

But the point is, speculators are hiding in a diminishing number of these seemingly safe havens without regard to short-run earnings performance. At this point, for example, Exxon's market cap is only down by $50 billion or 13% from year-end 2014 levels, meaning that it is still trading at 18X earnings that are heading much lower for much longer.

Likewise, the market cap of Microsoft (MSFT) has actually risen by $50 billion or 13% to $435 billion. With the global economy heading into a CapEx depression it seems a little more than late in the hour for MSFT to be sporting a 35X trailing PE ratio.

More importantly, the other 490 S&P stocks as a group have been sinking for the better part of a year. Their combined market cap was $15.1 trillion at the end of last year, but has since slide to only $14.6 trillion.

And well it should have. The balance of the S&P 500 still trades at 23X earnings, not withstanding an 11% drop in reported net income since the peak in Q3 2014.

All of this is to say that the third stock market collapse of this century is near at hand. The global economy is in the midst of an unprecedented commodity deflation and CapEx depression – the payback for 20 years of lunatic monetary stimulus and credit expansion.

Yet the central banks are powerless to stop the payback. When the Fed announces a rate increase after 84 months of dithering next week in the face of GDP growth that has already decelerated to barely 1% this quarter the jig will be up.

Monumental money printing has failed. Soon there will be no place to hide – not even in the Tremendous Ten.