END_OF_DOCUMENT_TOKEN_TO_BE_REPLACED

Staying in gold beats US stocks since 2000. Moving on pays better...

As NEW YORK mayor Ed Koch used to say: "How we doin'?" asks Bill Bonner in his Diary of a Rogue Economist.

"How can we take your recommendations seriously when you missed the biggest bull market of our lifetimes?"

He was referring to the big run-up in stock prices since 2009.

We strongly object. That is a gross misrepresentation of our record! First, we don't give recommendations; we just tell you what we're thinking and doing. Giving advice requires far more confidence in our own opinions than we have.

Second, we didn't miss one of the biggest bull markets of our lifetimes; we missed two of them!

But wait. There's more to the story. And (we can hardly believe it ourselves) it explains how we beat practically every investor in America...

This followed news that a key measure of the health of the US manufacturing sector, the ISM Manufacturing Index, revealed a second month of contraction in December.

"The Fed should not be raising rates," said some Wall Street analysts.

"Don't worry about it. As long as services are still expanding, we're all right," said others.

Most likely, they will both be proven correct: We're all right...until we're not. And when it becomes obvious that we're not, the Fed will put an end to its rate hikes.

Which takes us back to...us.

The late Richard Russell had taught us that markets move in large swings – from cheap to expensive and back again.

Few people today believe gold is a good investment. Even fewer were bullish on gold at the start of the new millennium.

We can't remember the last time we read a positive comment on gold in the mainstream press.

Actually, we don't know what we wrote. But we must have thought the top was in because we were proposing to get out of US stocks...and to stay out for at least the next 10 years.

If you had done the simplest thing – sell your US stocks and put the money into gold – as of yesterday, you would have watched a $10,000 investment turn into roughly $37,000.

This is still much better than what most investors earned. Most traded in and out of stocks over the last 15 years – most often buying and selling the worst stocks at the worst times.

This would have gotten you only a fraction of the buy-and-hold return...and most likely a negative result.

So, guess what – missing bull markets in stocks is no sin. Catching them is no virtue. And even after losing more than one-third of its value, gold is still not such a bad place for your money!

But what if you'd followed the rest of our formula?

This left us with a couple of questions...

Second, what if you had bailed out of gold on January 1, 2010...bought Japanese stocks...and switched from shorting the S&P 500 to shorting JGBs?

These calculations take more space than the back of our envelope provides, so we turned to Bonner & Partners researcher Nick Rokke.

Adjusting for fluctuations in the Yen against the Dollar...adding in dividends...and accounting for the short positions against US stocks and JGBs, Nick crunched the numbers.

And he came up with the returns you would have made on our combined Trades of the Decade between 2000 and today.

And as you can see, this simple strategy beat all major asset classes. 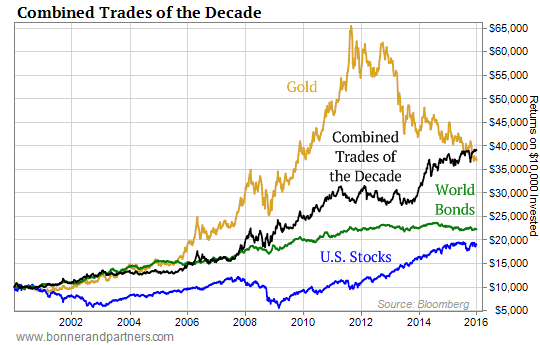 But it's all right with us.