END_OF_DOCUMENT_TOKEN_TO_BE_REPLACED

October's threat to stocks is overrated...
The DOG DAYS are ended...and September has begun, says Brian Maher, managing editor, The Daily Reckoning.
Here in Annapolis, summer's hell fever has broken – for the day at least. Rain and storms blew through. And a sharp, refrigerating wind steals in from the bay.
The weatherman projects clearing and cooling conditions to the 10-day horizon. We hope he is correct.
But no more seasonal reflections. Our beat is money. And markets. To money and markets we therefore turn...
Many market monitors consider September a month of peace before dreaded October.
The Panic of 1907, the Crash of 1929, "Black Monday" 1987 – all came barreling through in October.
October's record is so heinous, so felonious, it has even earned a title:
The "October effect".
But is it true? Has October truly earned its blackened reputation?
Today we haul the accused into the dock, interrogate its record...and pronounce judgment.
We open with an observation: The S&P 500 ended August with its seventh consecutive monthly advance – its longest stretch since January 2018.
Yahoo! Finance:

"The S&P 500 closed out a seventh straight monthly gain in August, rising nearly 3% during the month as strong earnings growth, an ongoing economic recovery and a still-accommodative Federal Reserve helped offset fresh concerns over the Delta variant's spread."

"This metric represents a P/E for all the companies in the S&P 500, based on their current stock prices and the previous 10 years of inflation-adjusted earnings. It seeks to "smooth out" short-term fluctuations in earnings and come up with a P/E representative of the true earning power of the companies involved."

Shiller's CAPE ratio presently vaults to a dizzying 39.13 – second only to the dot-com delirium 20 years past.
Meantime, Mr.Warren Buffett's preferred market indicator – the "Buffett indicator" – weighs stock market valuations against the gross domestic product.
This indicator held beneath 150% prior to the 2000 collapse. That is, stock market capitalization remained under 1.5 times GDP.
Prior to 2008's Great Financial Crisis, Mr.Buffett's indicator likewise held beneath 150%.
What is its present reading?
238% – stock market capitalization runs nearly 1.4 laps ahead of GDP.
Total market capitalization goes at $54.8 trillion. GDP, meantime, pegs along at $23 trillion...hence the 238% reading.
The ratio ranges 90% above historical trendlines, should it interest you.
Mr.Doug Ramsey, chief investment officer of Leuthold Group:

"I would argue that this market is, broadly speaking, more expensive than what we saw in the [1999-2000] tech bubble...
"The stock market today is so expensive that it almost represents a future disinflationary force. I mean, if stocks were to break lower by 20%, valuations would still look high, even relative to those that have prevailed over the past 25 years."

Just so. But revisiting the question of the hour: Is October the market menace we've all been led to believe?
History insists the answer is...no.
October's bankrupt reputation likely owes to a sour string of luck. And its conviction was based heavily upon scattered, circumstantial evidence.
Explains Stephen Williamson, former vice President of the St. Louis Federal Reserve:

"Stock market crashes have occurred sufficiently infrequently in history that there is not enough evidence on when they are more likely to occur."

The gentlemen and ladies of Yardeni Research further vindicate October. The average S&P October return is not negative in the least, they inform us.
It is, in fact, a positive 0.4%. A slender gain, yes – but a gain.
Meantime, Investopedia informs us that more bear markets ended in October than began in October.
Downturns in 1987, 1990, 2001 and 2002 swung around in the year's 10th month.
We must therefore conclude: An innocent man has been pitched into infamy...and packed off to the gallows on a wrongful charge.
But if October is not the depraved menace many believe, does another month rise in its place?
The record argues that yes, another month is the genuine menace. Which month?
September – this month.
"Since the Dow Jones Industrial Average was created in the late 1890s," financial columnist Mark Hulbert notes, "September has produced an average loss of 1.1%."
"The 11 other months of the calendar," Hulbert adds, "have produced an average gain of 0.8%."
Nor do one or two renegade Septembers explain it, says Hulbert:
"On the contrary, the month has an impressively consistent record at or near the bottom of the rankings."
September's ill luck covers both the Dow Jones and S&P...incidentally.
Yahoo Finance:

"According to LPL Financial, September has been the worst-performing month for markets, on average, since 1950. The S&P 500 has dropped about 1% on average that month since 1950, LPL Financial data shows. The only other month to notch a drop on average (and a minuscule one at that) going back to 1950 is August."

Bank of America Merrill Lynch strategist Savita Subramanian has pulled together the S&P's median September return since 1928.
The facts confirm it. September is the great thief of investor money, not October.
Here is his evidence – the red-handed evidence: 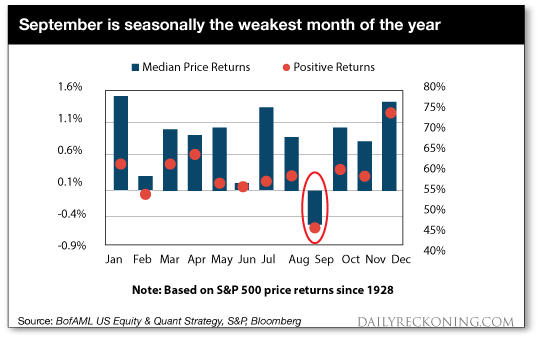 Next to September, October is a month of nectar, of honey.
And so the time has come to correct a cruel and libelous wrong...
It is time to replace the "October effect" with the infinitely more deserving "September effect."
But let us stow away all further talk of Septembers past. What about September present?
The stock market went spreeing in August – again, extending its loveliest streak since January 2018.
But a canvassing of Septembers past puts us on alert for heavy weather. The record – though imperfect – gives a fair warning.
Do we hazard our own prediction of September doom?
Of course we do not. We have munched crow too many times – without salt, without butter, without a beverage to help it down.
"Sometimes right, sometimes wrong and always in doubt, we just try to connect the dots," as our co-founder Bill Bonner styles it.
We are but one day into the month. We would not be one lick surprised if the market maintains its winful – if sinful – ways.
But if history is a reliable barometer...September is one of the most dangerous months to speculate in stocks.
Along with, as the great scalawag Mark Twain noted, July, January, April, November, May, March, October, June, December, August – and February.