END_OF_DOCUMENT_TOKEN_TO_BE_REPLACED

IF YOU are a speculator, the extreme situations currently in play in the broad stock market (95% of the way to a potential 'triple top' scenario price-wise, and 80+% of the way time-wise) and the gold market (impulsive price drops amid growing concerns that the bull is dead despite rising money supply data) as of March 1, 2013 are the situations that you wait for, writes Gary Tanashian in his Notes from the Rabbit Hole.

A big macro pivot point on the other hand can be a career maker – if you can catch it at the right time after correctly gauging its potential. This is no easy task. If it were we would all be mega rich due to our amazing ability to call the markets. Unfortunately, the markets have a great way of throwing curve balls that not only have a wicked spin on them, but also burrow down hard and in. Maybe it is heavy sliders that the market continually throws, maybe it is sinkers. Whatever it is, our bats are often sawed off just when we think we are dialed in to a grand slam.

So moderation and risk management are what we should practice most of the time. It sounds boring, but when a big pivot comes, you will be glad to be in position to capitalize on these rare events. As an example, people who had cash in 2008 and 2009 were afforded the opportunity to buy all sorts of assets on the cheap, beginning with the precious metals, then key commodities and finally extending out to the stock market.

2008?s deflationary destruction was a contrarian macro pivot point as this Time Magazine cover with its depression-era bread line photo said all anyone needed to know about what the play would be.

And then came Tony Robbins sometime in 2009 warning the public about the dire consequences of the new depression and the rest is history. A cyclical bull market was born of too much doom, gloom and certainty by the public that the world as we knew it was over.

Dial ahead to today and we find the estimable Time Magazine asking...

Are We Watching a Great Rotation Into Stocks?

What does this tell you? Does Time know what it is talking about this time or is it just reflecting the public's view of the world back from mirror into which it dimly gazes?

Time Magazine published photos of breadlines and headlines reading "Depression 2.0" at the very beginning of the current cycle, at exactly the time people should have been buying. Today, just below a potentially profound macro pivot point Time seriously ponders a "great rotation" into stocks. Sure, they could get it right this time. But what do you think are the odds of that?

You see, you have got to think for yourself if you are going to effectively practice what is necessary to succeed over the long-term in the markets. No analyst, guru or newsletter writer should be followed in a passive manner. How do you know they are not just trend followers, doing what is comfortable; doing what seems to feel the best and make the most sense at any given time?

It seemed to make the most sense to be bearish in early 2009. It was time to be very bullish. It seems to make sense now to be bullish now because it feels good and the apparent dangers are dissipating as policy makers assure us that they remain benevolent and in control. They are not in control, but it has been a long, hard battle for the formerly embattled Ben Bernanke to be given the respect of his predecessors. He now has it: 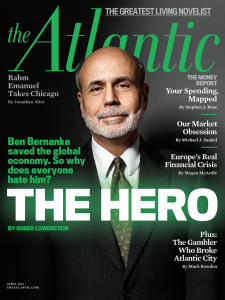 Just look at his smug self-satisfaction. The benevolent hero in full control. We will continue to work on a macro pivot for some time in 2013 until given reason not to. In 2008 I became bullish on the gold sector first, then in early 2009 there was crude oil, copper and soon a Pandora's Box of asset markets giving contrarian bull signals. That was a macro pivot.

Today we should look out ahead to gauge the possibility of its opposite becoming engaged before too long. I believe the bloodbath in the precious metals may be a precursor to something profound. The PM's did after all, lead the great cyclical bull market dubbed here as "Hope 09".

For profound events to work for you in any sort of a good way you must be prepared for it. Being prepared means opposing psychologically powerful forces like the will of the herd, which probably comprises 90-something percent of the people. It is harder than it sounds.

Get the safest gold and silver at the lowest possible price on BullionVault...