END_OF_DOCUMENT_TOKEN_TO_BE_REPLACED

But still people look at GDP as a guide to investing, and vice versa...

Why? Because the current stock market bull, which was born on March 9, 2009, has become the second longest in history. It's lived for a full 87 months so far – which is 35 months longer than the average bull market.

Only three bull markets in history have celebrated their 7th birthday. And although the current bull market has attained that elite distinction, it's been dubbed the "Least Loved" bull market. 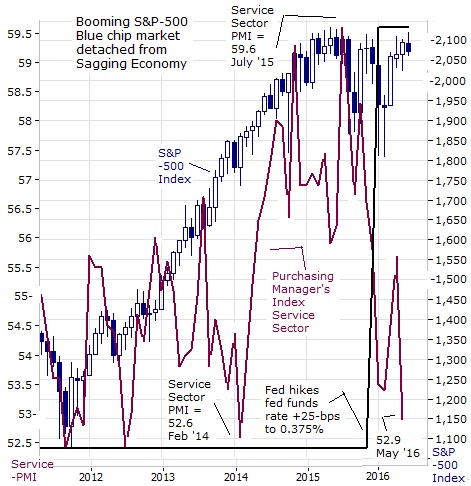 That's because it's been accompanied by the weakest economic recovery from a recession, since the Great Depression of the 1930's. the US working class has experienced an unrelenting assault on its living standards over the past eight years. The so-called economic "recovery" under Obama has entailed the creation of part-time and poverty-wage jobs, the slashing of employee benefits, and a continuation of mass unemployment.

A report published earlier this year by Princeton University and the RAND Corporation found that all job growth in the US over the last decade was accounted for by the growth of "alternative work arrangements", or people working as independent contractors, temps, through contract agencies or on-call. Such jobs usually entail minimal job security, health benefits and vacation days.

Driven entirely by a massive exodus of people from the US labor force: 664,000 potential workers exited the labor force in May '16; and pushed the number out of the workforce to a record high of 94.7 million. All anyone needs to know in terms of what slack there is left in the jobs market, the broad U-6 unemployment rate was stuck at 9.7%.

However, as a result of eight years of near-zero interest rates, bank bailouts, and "quantitative easing" money printing operations, the wealth of the US financial oligarchy has soared, and social inequality has widened dramatically. Under Obama, 95% of all income gains have gone to the richest 1% of society, while median household income has declined by thousands of Dollars. The mechanism that's behind the wealth disparity is the booming stock market, which has been inflated by the Federal Reserve.

Still, the aging bull is showing signs of its age. Since the S&P-500 index notched its last record close of 2,131 on May 21, 2015 – it's endured two corrections of -10% or more, but quickly recouped its losses both times. Almost 13-months later, it's about -3% below of its all-time high. Since 2009, S&P 500 companies have spent more than $2 trillion to repurchase shares, helping sustain a rally where stock prices almost tripled.

By now it is a well-known fact that corporations have no real way of generating organic profit growth in this economy (the recent plunge in Q1 EPS was a stark reminder of just that), so they are relying on two things to boost share prices: multiple expansion (courtesy of central banks) and debt-funded buybacks (also courtesy of central banks who keep the cost of debt record low). Incidentally, all the newly created debt during the "Least Loved" bull market has gone for just one thing: to fund stock buybacks.

Fundamentals, such as corporate earnings, profit margins and gross domestic product (GDP) growth – are supposed to be the ultimate guide for judging stock values and predicting the stock market's direction. But those fundamentals are useless when it comes to forecasting stock market trends, a Vanguard study published in March '13 concluded. "We're not saying fundamental factors don't matter," Roger Aliaga-Diaz, a study co-author and Vanguard senior economist.

"The problem is that there are many other factors influencing stocks."

Vanguard economists examined the stock market going back to 1926 to reach their conclusion.

Price/Earning ratios are the most reliable indicators, but even they explain changes in stock values only 40% of the time. Most striking, was the recognition of the disconnect between stock values and fundamentals like GDP growth. A country's GDP growth is different from its stock market outlook, Simon Hallett, chief investment officer at Harding Loevner, told The New York Times. "I cannot emphasize that enough."

For example, the Euro-Stoxx-600 index surged +20% in the year 2012; while Europe was stuck in a deep recession. Stock markets are no longer mirrors of national economies; they are not – as is so commonly said – magical forecasting mechanisms. They are small slices of ownership in specific companies, and today, those companies have less connection to any one national economy than ever before.

As a result, stocks are not proxies for the US- economy, or that of the European Union or China, and markets are deeply unreliable gauges of anything but the underlying strength of the companies they represent and the schizophrenic mind-set of the traders who buy and sell the shares.

As such, the S&P 500 index has been able to shrug off the recent sharp plunge in the ISM's service sector index – which fell to a reading of 52.9 last month from April's 55.7. It was the lowest reading since February 2014. Anything above 50 signals growth. The ISM is a trade group of purchasing managers. Its services survey covers businesses that employ the vast majority of workers, including retail, construction, health care and financial services companies. Services firms reported slower growth in production and new orders.

The ISM report followed a disappointing report on job creation last month. The Labor Department reported that employers overall added just 38,000 jobs in May, the fewest in five years. Services, which account for more than 70% of US- jobs, have been a source of US economic strength.

The ISM services index has signaled growth for 76 straight months. However, the drop in the services index hints that the US-economy's troubles could just be starting. For that reason, traders expect no more than 1 Fed rate hike this year, around December at the earliest.