END_OF_DOCUMENT_TOKEN_TO_BE_REPLACED

A value defense of why stock markets could be headed higher for years to come...

WORLD STOCK MARKETS are in a multi-year bull-market, I believe, and nominal prices are likely to appreciate for several more months, writes Puru Saxena of Money Matters in Hong Kong for The Daily Reckoning.

In our view, we are currently amidst a normal multi-week consolidation phase and most stock markets are likely to stage a sharp year-end advance.

Look – we know that the developed economies are in trouble and they are unlikely to improve anytime soon. For instance, unemployment remains stubbornly high, deficits are spiraling out of control and debt levels are unprecedented. At first glance, things do look dire but we still believe that nominal stock prices will continue to rise.

If our assessment is correct, stock markets in the developed world will continue to drift higher over the following months as corporate earnings play catch up and compress valuations. So, even though it may take years before the major American and European indices decisively break out above their record-highs, equity investors should be able to outperform both cash and government bonds over the next decade.

More importantly, we suspect that the stock markets of the developing world (led by Asia) will outperform their counterparts in the developed world over the following years. This is due to the fact that unlike the industrialized nations, the developing countries are growing at a healthy pace and we expect their stock market valuations to expand.

As we have stated previously, we continue to believe that the nominal low of the entire secular bear-market was registered in March 2009 when the S&P500 Index bottomed out at the devilish number of 666. It is our conjecture that 6th March 2009 will go down in the history books as the ultimate nominal low of the entire secular bear-market. Put simply, given the ultra-loose monetary policy and the central bank's ability to unleash "stimulus", we do not expect the stock markets to break below last spring's lows.

Now, we are aware that many smart people continue to believe that we are still in a secular bear-market and that it is only a matter of time before stock prices plunge again. According to the bearish camp, global stock prices are currently in a "dead cat bounce" and they are ultimately headed much lower. As much as we sympathize with such dire predictions, such pessimistic forecasts do not stand the test of time.

Allow us to explain...

For example, the previous secular bear-market in the US lasted between 1966 and 1982. During that 16-year period, American stock prices oscillated within a wide trading range and frustrated most market participants. In terms of valuations, even though the bear-market continued until 1982, the ultimate nominal low was recorded 8 years earlier in 1974.

It is interesting to observe that despite the fact that stocks were not cheap in September 1974, that low turned out to be the best long-term buying opportunity. Unfortunately, during the 1974 stock market plunge, purists kept waiting for lower valuations and they ultimately ended up paying much more because nominal stock prices never fell below the levels seen in 1974.

Ironically, when valuations bottomed out in 1982, the Dow Jones was significantly higher than the low recorded in 1974. Essentially, what happened between 1974 and 1982 is that nominal stock prices gently drifted higher as corporate earnings skyrocketed; thereby compressing valuations and ending the bear-market. 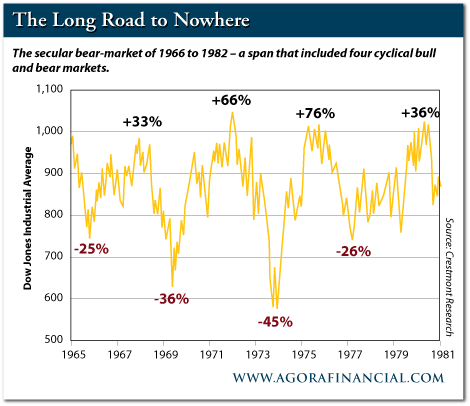 Turning to the most recent secular bear-market, there can be no doubt that valuations in the developed world were not incredibly cheap in March 2009. However, similar to 1974, it is probable that last spring's panic-fuelled prices represented the nominal low of this secular bear-market. If history repeats itself, stock markets in the developed world will continue to drift higher over the coming several months and corporate earnings will play catch up, thereby compressing valuations.

In any event, we continue to believe that over the course of the next decade, the investment return from high quality companies (consistent revenue and earnings growth, low debt level, free cash flow and predictable earnings) will be higher than the yield from government bonds or cash.

Accordingly, we are patiently holding on to our outstanding collection of varied businesses and we are pleased to report that the recent operating results of our companies have been very satisfactory. Like always, we do not know when Mr. Market will recognize the inherent value of our companies but we do know that we have allocated our clients' capital to world-class corporations. Last but not least, as and when the market climate improves, Mr. Market should revalue our stream of growing earnings and cash flows.

In short, and although "end of the world" deflation fears are still fashionable, we do not expect a deflationary depression. Whilst it is true that bank credit is still contracting, in our view, this does not mean that deflation is imminent. This is not the first time total commercial and industrial loans in the US have fallen sharply. After all, bank lending in the US also contracted in the aftermath of the previous two recessions, yet the world's largest economy did not have to deal with deflation. This time around, we are betting on a similar outcome and our investment strategy is positioned for a slow-growth, high inflation environment. 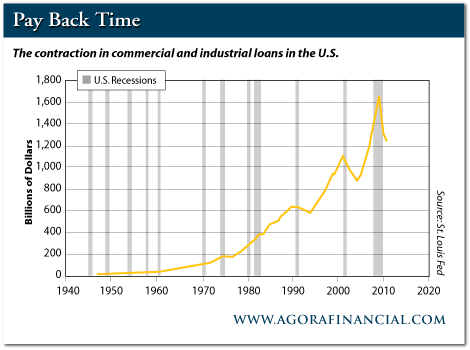 If our world-view is on the mark, over the following years, the developed world will produce sluggish but positive economic growth and in a perverse manner, this is bullish for global stock markets. In a nutshell, as long as the industrialized economies remain relatively weak, interest-rates will stay low and this will help prolong the bull-market in "risky" assets.

At some point in the future, when the global economy starts to overheat, interest-rates will rise again and a defensive investment position will be warranted. When such conditions express themselves, we will defend capital and switch to "capital preservation" mode. However, for the next several months at least, we intend to enjoy the benefits of "stimulus" and cheap money.

Buy gold at the lowest price, and store it in the very safest locations using BullionVault today...