END_OF_DOCUMENT_TOKEN_TO_BE_REPLACED

Price is what you pay, value is what you get. Got gold yet...?
"VALUATION," writes David Merkel, "is rarely a sufficient reason to be long or short the market," says Tim Price on his Price of Everything blog.

Merkel went on to warn, "you will know a market top is probably coming" when...
Notwithstanding Merkel's caveat about pricing, valuations still matter.
Assuming that one is investing as opposed to speculating, initial valuation remains the single most important characteristic of whatever one elects to buy. And at the risk of sounding like a broken record, "initial valuation" in the US stock market is at a level consistent with very disappointing subsequent returns, if the history of the last 130 years is any guide. Without fail, every time the US market has traded on a CAPE ratio of 24 or higher over the past 130 years, it has been followed by a roughly 20 year bear market
The evidence for the prosecution is visible below, for the peak years 1901, 1929, 1966 and 2000. And 2013? Of course, this time might be different. 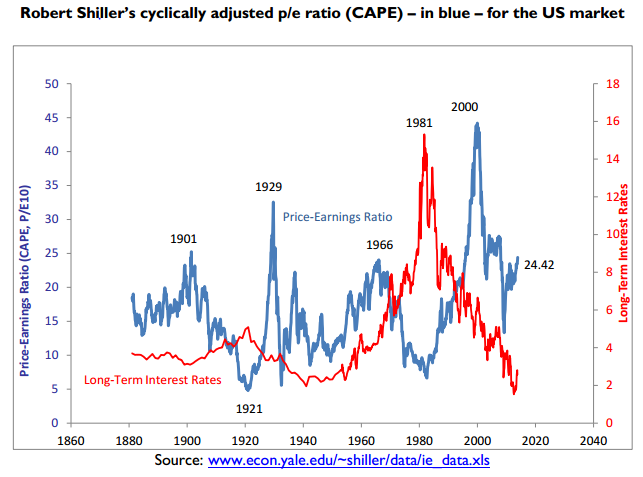 But there is the stock market, and then there are individual stocks. We have no interest in the former, but plenty of interest in the opportunity set of the latter. We're just not that interested in the US market, given general valuation concerns, and the malign role of Fed policy in distorting the prices of everything. As purists and unashamed value investors, we have plenty of other fish to fry.
Probably the biggest of those fish is that giant part of the world economy known as Asia. The chart below shows the anticipated growth in numbers of the middle class throughout the world over the next two decades.
The solid green circle is the current middle class population (or as at 2009 to be precise); the wider blue-fringed circle represents the forecast size of this population in 20 years' time. The OECD definition of middle class is those households with daily per capita expenditures of between $10 and $100 in purchasing power parity terms.
Note that in the US and Europe, the size of the middle class is barely expected to change over the next two decades. Central and South America, and the Middle East and North Africa, are forecast to grow a little. But one area stands out: the emerging middle class in Asia is forecast to explode, from roughly 500 million to some 3 billion people. 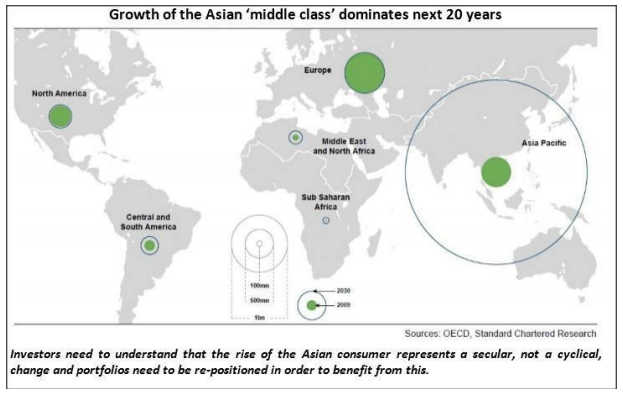 In equity investing, the combination of a compelling secular growth story and compellingly attractive valuations is a very rare thing, the sort of investment opportunity that one might only see once or twice in a generation, if that. But it exists, here in Asia, today. Once again, however, we have to abandon conventional financial thinking in order to exploit it.
Asian personal consumption between 2007 and 2012 – while the West was suffering from a little localised financial crisis – grew by 5% to 10% per annum. Industries likely to benefit from sustained growth in domestic consumption include food and beverages, clothes, cars and insurance.
But the index composition of Asian equity index benchmarks leaves much to be desired. Of the 10 largest companies in the MSCI Asia ex-Japan index, three are low margin exporters in Korea and Taiwan, one is a low margin Chinese telecoms business, three are state-run Chinese banks, one is an inefficient Chinese oil and gas producer, and one is an expensive Chinese internet business.
That doesn't leave much for value investors to go on. Asian equity funds more generally, tending to be index-trackers, are heavy in Chinese stocks of indeterminate value and clunky 'old Asia' exporters with far too much research coverage.
Or one can ignore index composition ('yesterday's winners') entirely and focus instead on 'best in breed' businesses throughout the region on an unconstrained basis. Which is exactly what Greg Fisher's Halley Asian Prosperity Fund does. Stocks that make it into this tightly defined portfolio typically have historic returns on equity of 15% or higher, a history of dividend growth, little or no debt, price / book ratios of 1.5x or less, and price / earnings ratios ideally in single digits (its average p/e stands at around 8x). As Greg puts it, amid a world of worries, "keeping the discipline of holding lowly valued, under-owned and unleveraged companies is likely to continue to protect our capital and earn us both income and capital appreciation over the longer term."
In terms of macro analysis, this interview with CLSA's Russell Napier is one of the best we've heard this year, concisely addressing many of the major current concerns we really should be worried about, including the rising risk of emerging markets exporting deflation to the West, the next stage of government abuse of markets including the formal rationing of credit, and the growing attraction of gold (as a deflation and inflation hedge) at its current price.
On which topic, David McCreadie of Monument Securities suggests that "if gold is driven down to $1030, and there will be a lot of noise if it does, I think it will offer a very unusual and highly profitable P & L opportunity, both in the physical but especially in the mining shares. Upside of x 5-10 doesn't come along very often and it's definitely one for the SIPP and the kids' education fund.
Nonetheless if you own it here or above then I think you take the pain in this final phase. Nor do I believe shorting is sensible; the main money has been made on the short side and in these metals, the biggest and most explosive profit potential is always on the upside."
Or to put it more plainly, and in the words of Warren Buffett, price is what you pay; value is what you get. US stocks may be expensive, but you can get better economic fundamentals and cheaper valuations selectively throughout Asia. And as insurance against the sort of disorderly currency moves that seem to be almost inevitable courtesy of so many central banks behaving badly, we still maintain you can't do better over the medium term than gold.