END_OF_DOCUMENT_TOKEN_TO_BE_REPLACED

Well, unless it's different this time...
As CORPORATIONS continue to raise wages, market participants fear the Fed is wrong about supposedly "transitory" inflation, writes Gary Tanashian in his Notes from the Rabbit Hole.
Long-term Treasury bond yields have resumed the rally (bond prices decline) and manufacturers' (ISM) costs keep rising. Yet the Fed's inflationary operation – a desperate monetary kick save if ever there was one – labors on.
The Fed has manipulated bonds and flooded the markets and the economy with funny munny created out of nowhere, as if by magic. As if by MMT (modern monetary theory) TMM (total market manipulation). So far, so good. Jerome Powell stands to be the first non-Bernanke winner of the Ben Bernanke Award for Heroism in the line of inflating a debt ridden economy.
Since becoming bullish on the inflation trades last summer after the worst of the deflation scare had played out, the expectation has been for this 'good' inflation to eventually be replaced by one of two things (using the 30yr Treasury Yield Continuum of dis-inflationary macro signaling as a guide)... 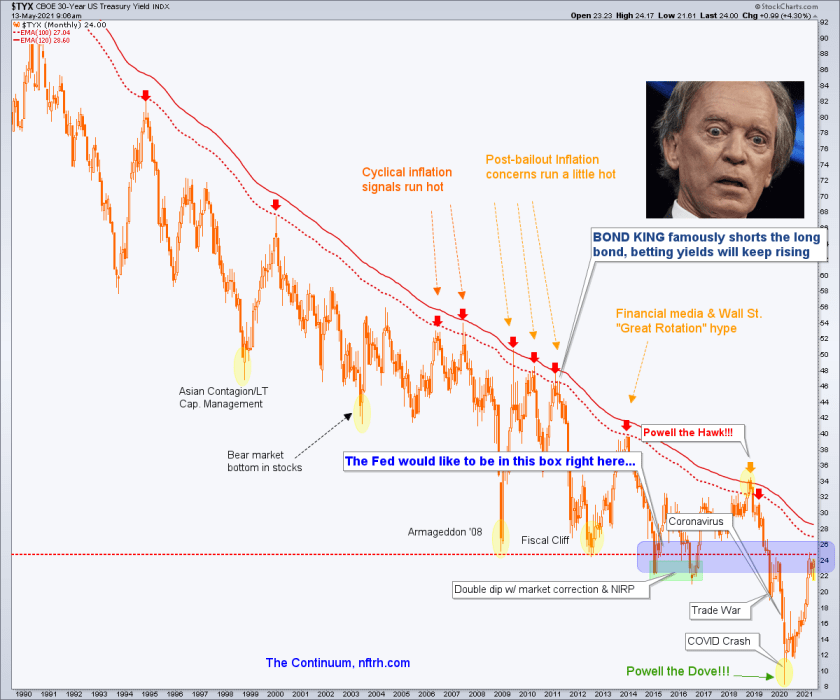 Either we get another logical deflationary liquidation of the excess as per the Continuum's history.
Or we get a ramp up in inflationary pressure on the economy from which the Fed does not back off, an all-in double down on the inflation trades, which would instigate yields to do what they have not done in the history of my handy chart above.
That would be to go Stag in the next phase of the 'flation'.
From Trading Economics, here is the graphical picture as inflation's cost effects launched in April (despite April's suspect Payrolls Report) and wigged the markets out pretty good (but has not yet broken them).

Bonds manipulated → (funny) munny printed → government taxing and spending (as if the munny is free) → costs rising → manufacturers and services PUSHING those costs into the economy → get ready for our combative antlered friends above to make the scene if the Continuum disregards the monthly EMA 100 & 120 limits this time.
Different this time or same this time? Pick your poison. The usual deflationary resolution (bust) or a ramping of inflation into the economically destructive kind, where cost pressures get out of hand and pressure businesses, consumers and supply chains?
We are already seeing Stagflationary pressure in the ISM report, in Semiconductor supply shortages, in seemingly unavailable labor, in FOOD (as NFTRH has tracked and I have traded/invested in since last year, the Agricultural sector is on a big time cyclical bull). Other necessities will no doubt become more expensive; both products and services if a blessed deflationary resolution is not in the offing (this time).
In short, and in my normal everyday language, the economy would fly up its own ass in a spiral of rising costs while today's inflation proponents suffer a case of 'be careful what you ask for, you just might get it'. We are approaching the decision point between the usual dis-inflationary or deflationary resolution to a willfully man-made inflationary operation, or uncharted territory.
But as surely as a 2008 style deflationary episode would be a resolution, so too would be an inflationary Crack-Up Boom or short of that, the Fed staying on the inflationary gas pedal for too long.
Mises's policy advice was instrumental in helping to stop hyperinflation in Austria in 1922. In his Memoirs, however, he expressed the view that his instruction – halting the printing press – was heeded too late:

"Austria's currency did not collapse – as did Germany's in 1923. The crack up boom did not occur. Nevertheless, the country had to bear the destructive consequences of continuing inflation for many years. Its banking, credit, and insurance systems had suffered wounds that could no longer heal, and no halt could be put to the consumption of capital."

Market signals say it's still inflation 'on' and by extension, risk on. The Fed has, after all, instigated us into risk 'on' mode by increasing the supply (reducing the value) of the monetary unit that generally settles the global macro inflation/economic reflation trades...

...by bloating its balance sheet as needed.

As the Continuum above continues to indicate inflationary pressure, another deflationary liquidation or a gateway to uncharted inflationary territory awaits at the Continuum's limiters.
I have been asked by a subscriber (of note, due to his experience in professional fund management) to consider not highlighting my macro tools in public, and I usually don't give away the fine details. But we (NFTRH) have been successfully managing the inflation for a year. I think it is timely now to use one indicator, one of my most important indicators, to offer a pubic guide to a macro decision point out ahead that will be for all the marbles where determining forward strategy is concerned.