END_OF_DOCUMENT_TOKEN_TO_BE_REPLACED

Object lessons in the myth of NGDP from Greece and Japan...

In U.S. HISTORY, various forms of "soft money" have been favored by Democrats and other lefty/socialist types, writes Nathan Lewis at New World Economics, in this article first published at Forbes.

It is a natural extension of their vision of government influence and control in all aspects of economic life. Political conservatives have tended to be gold standard advocates, defending the monetary principle that the United States embraced from its inception.

However, after World War II, conservatives have tended to be split between Stable Money gold-standard advocates, and some form of conservative-flavored "soft money".

Before 1985, this was dominated by Milton Friedman's "monetarism", which postulated a fixed rate of expansion of the monetary base (to be enshrined in a Constitutional Amendment), and later focused on measures of M2 and similar statistics.

The first notion didn't get much traction, perhaps because it was obvious to more than a few people that it would result in Bitcoin-like volatility of value. The second idea was basically trashcanned after Paul Volcker attempted a variant of it beginning October 1979, and caused all kinds of ruckus before he publicly abandoned it in September 1982.

With conservatives divided between such proposals, various forms of Soft Money have conquered practical policy, and also academic consensus. I'm hearing from the grapevine that serious money is pushing this "NGDP targeting" idea in Washington, DC.

Today, nobody takes Milton Friedman's big ideas very seriously. Too many car wrecks. But conservatives are still divided. Stable Money advocates still favor a gold-standard system – the proven method that served as the foundation for prosperity in the US and around the world for nearly two centuries before being abandoned, after two wonderfully prosperous decades, in 1971. Others are beguiled by a neverending parade of new proposals which have the advantage of never actually having been tried.

One of the most popular these days is the idea of "nominal GDP targeting". One such proposal has been offered by Scott Sumner of George Mason University.

The basic idea is that there would be something like a market in "nominal GDP futures", basically a betting pool on the outcome of the GDP statistics. The Federal Reserve would automatically increase the monetary base, by some sort of open-market operation (among a variety of proposals), whenever the NGDP market was below a target value (he suggests 3.65%), and contract the monetary base whenever it was above.

Let's assume, for argument's sake, that this contraption actually works as intended, and that nominal GDP does maintain something like a smooth path of growth. What would be some foreseeable consequences?

With a stable currency, "real" GDP might be -2.0%. However, the Federal Reserve would – automatically – increase the monetary base such that this is magically turned into an NGDP of 3.65%. In other words, the GDP deflator might be +5.65%. That would be a pretty big move for a broad, slow-moving price index like the GDP deflator. It would probably require a substantial decline in Dollar value, on the foreign exchange market for example.

"Well, that's good right? We get a stable NGDP, and the previous Dollar decline is then reversed."

Oh really? Let's add it up.

First there was a big Bernie Sanders tax hike, which trashed the economy, and which nobody has yet fixed. Then, on top of this problem, we have some substantial monetary turmoil which might include a big Dollar decline, and then a big Dollar rise, sufficient to produce a change in the GDP deflator from +5.65% to -1.35% in the course of a few quarters. Is this really good for the economy? Does this constitute "macroeconomic stability"?

Remember, these potential changes in Dollar value are basically uncontrolled. They are the unpredictable outcome of the Federal Reserve's NGDP targeting machine, which is on autopilot. They could be a lot bigger and more disruptive than people would like – just as Milton Friedman's monetarism, when actually put into practice by Paul Volcker, produced wild swings in Dollar value and interest rate chaos. It was such a mess that everyone soon ganged up to drive a wooden stake through its heart and kill it forever.

What about an economy that is consistently "underperforming"? What if the Bernie Sanders tax hike is followed by another, and another, in exactly the kind of self-destructive spiral that has caused Greece's nominal GDP to fall by 25%? Then, there would be no economic recovery, and thus no Dollar recovery. The Dollar would just go down, down, down as Fed officials assure the public: "Sorry, it's not my fault, it's the automatic whatchamacallit."

You might consider that adding a one-way Dollar breakdown to a tax-hike catastrophe maybe wouldn't constitute "macroeconomic stability". 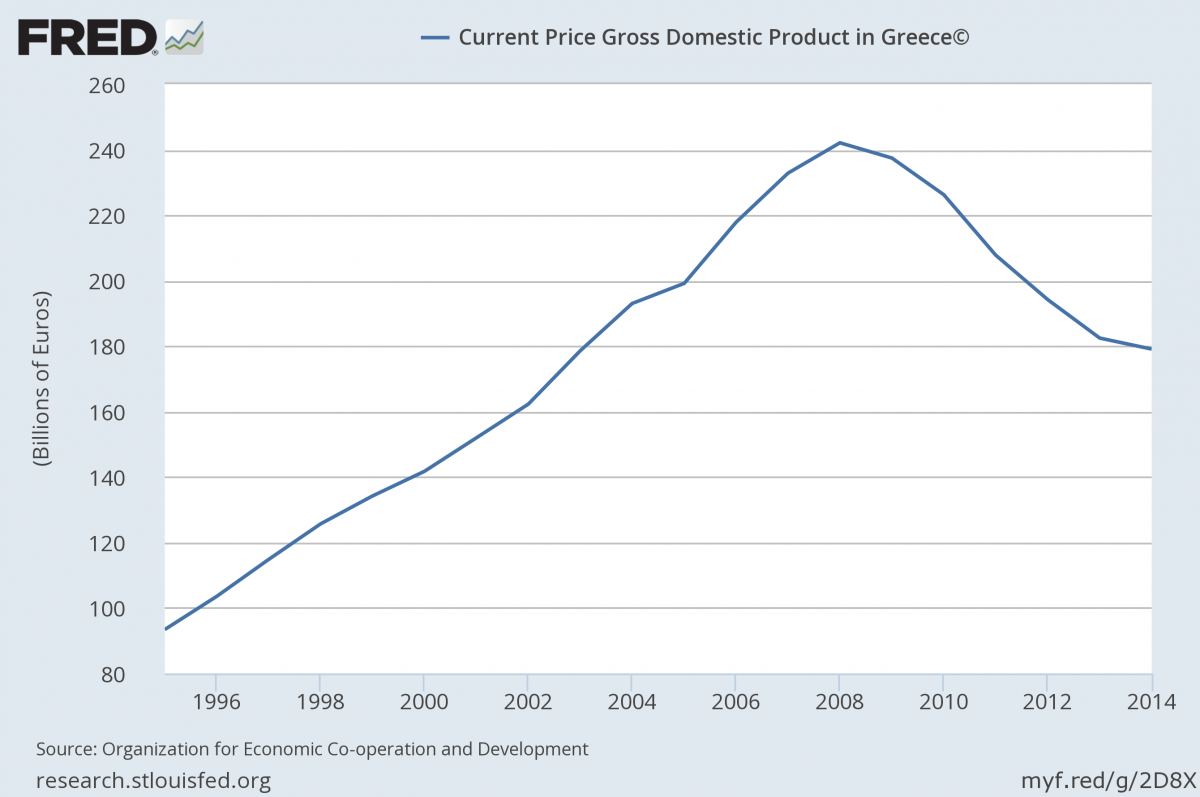 How about the opposite scenario? What if President Ted Cruz's flat tax pushes the growth capabilities of the US economy to awesome new heights? Many of the governments that implemented flat taxes in the 2000-2011 period had nominal GDP growth in excess of 15%.

This is not so surprising: Japan also had nominal GDP growth around 15% during the 1960s, even with a yen pegged to gold and commodity prices dead flat. Obviously, the monetary contortions needed to squash a 15% NGDP rise down to 3.65% would be pretty serious, something like a GDP deflator of -11.35%.

And what a waste – turning a wondrous economic boom into an economic disaster. 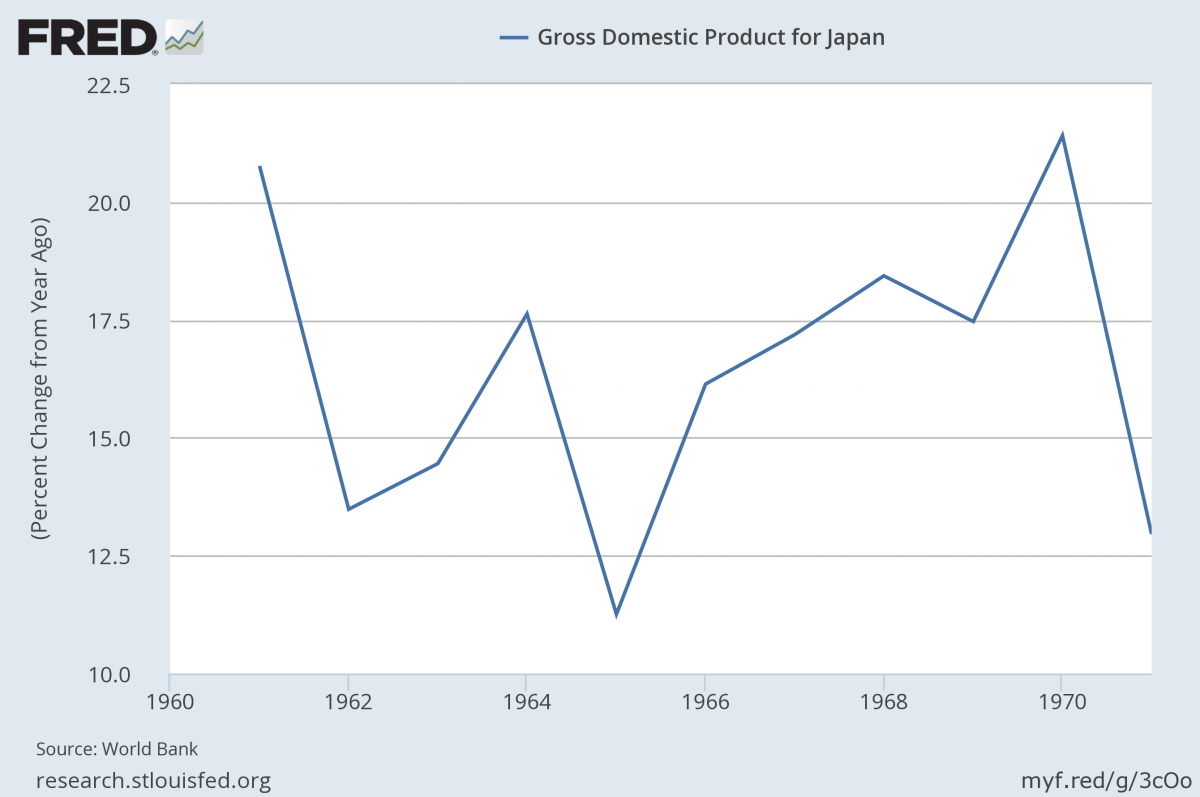 Sumner rather conspicuously omits this possibility, because you can imagine what it would mean. Who would decide what the target is? How often would it be changed? Would markets then have to react to every tiny statement by a Fed official between meetings that suggests what the new NGDP target might be?

This all assumes that this device works just as intended. But, it might not. NGDP is a government statistic – a statistic that has been, I think, relatively free of corruption because not so much is dependent on it right now. GDP statistics are more often scrubbed of bad news via adjustments in the GDP deflator, which convert nominal GDP into the "real" GDP that most people pay attention to. Even among jaded observers, the recent "double seasonal adjustment" to Q1 2015 GDP elicited widespread guffaws.

The consumer price index is such a plastic surgery disaster as to be almost unrecognizable from what it was 30 or 40 years ago. Do you think that President Bernie Sanders, wanting to be re-elected, might find a way to jimmy the NGDP statistics in such a way as to cause the Fed to give the economy a monetary boost? Why not just make it up out of thin air, depending on perceived political ("economic") necessity?

Then, there's the possibility that the "NGDP futures market" could be manipulated by large financial interests. Sumner assures us that this is impossible, because some other academics wrote a paper. Never mind that major financial institutions around the world have been getting busted week after week for manipulating every financial market under the sun, including the largest markets on Earth. Never mind that Enron's manipulation of the "electricity market" caused multiple large-scale blackouts in California in 2000-2001.

No, forget about that. Instead of some tweedy academics, whose real-life experience probably consists of "rebalancing" their IRA, let's hear what some people who actually know a little bit about real financial markets in the real world have to say:

"These markets are all rigged, and I don't say that critically, I just say that factually."
- Ed Yardeni, Yardeni Research.

"Global financial markets are more distorted than ever before."
- Felix Zulauf, Zulauf Asset Management and member of Barron's Round Table

If this is what they say publicly, imagine what they really think.

I think it is maybe possible that someone could make the "NGDP futures market" dance to their tune, especially as this would lead directly to influencing Federal Reserve open-market operations – a rather nice carrot indeed.

The gold standard has an awesome track record of real-life success over a period of centuries. That's why conservatives traditionally supported it. I wouldn't buy into these careless daydreams, which are flawed from first principles, even if it actually worked as advertised. At the very least, let someone else go first.