END_OF_DOCUMENT_TOKEN_TO_BE_REPLACED

Any contributions you've made are gone – used up to pay "early investors"...

I truly do enjoy your insights on the Whiskey & Gunpowder posts. These ideas are very much in tune with what is going on. But why do you and others insist that Social Security is somehow an entitlement? No matter what the immoral politicians did in stealing our contributions to the Social Security Trust funds, the fact of the matter is that I paid in all of my working life. And furthermore, so did my employers and this too distorted what I should have earned. This money, well over $300,000, was paid in and now I expect it to be returned, even if it is way more worthless now. You act like somehow this should be ignored and the State owes me nothing for my contributions. That's bull, my man!

Dear patron, those funds you put in aren't just "stolen into" the Social Security. They've been stolen out as well.

They've been used to pay earlier "investors." That's why we keep referring to this scam as one of the Ponzi sort.

If you were an early contributor, congratulations! You're going to do a lot better than anyone coming after you. But you still probably won't do as well as Ida May Fuller, the very first recipient of a Social Security check in the US She received her first check for $22.54 on January 31, 1940. She continued to receive checks till her death in 1975.

Ida May only had to pay into the newly minted system for a mere three years. Her total payments came to a scant $24.75. (To be fair, her employer had to match that amount.)

Here's the chart of her contributions and covered earnings as prepared by one Larry DeWitt for the SSA. 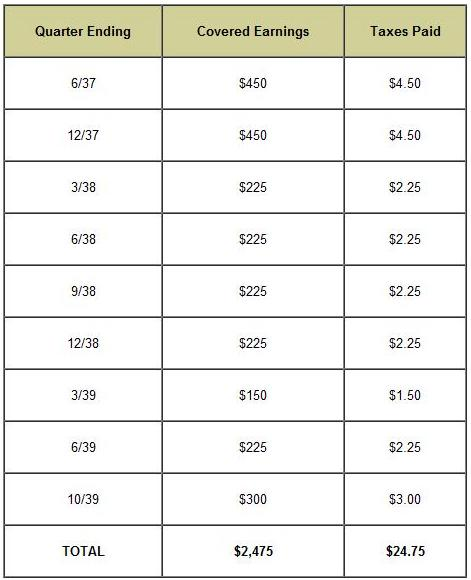 By the time of her death in 1975, however, Ida May had collected $22,888.92 from Social Security monthly benefits. Now THAT is an investment strategy. Warren Buffet, eat your tax-shilling heart out!

Like most successful investment strategies, however, it required some timing. In fact, since it's a Ponzi scheme, the only real way to win was to be first in line or as close to it as possible.

In the case of Social Security, aside from being early to the party, it also helps tremendously to refuse to die so you can collect as long as possible. Ida May lived to be 100 years old and managed to collect monthly paychecks for 36 years.

She got that money because a lot of other people were forced to "pay it forward" by means of their own involuntary contributions. They were forced to fund Ida May with the "contributions" (handed over on pain of imprisonment) ostensibly being put aside for their own Social Security payouts later on.

This is the very definition of a Ponzi scheme. Returns of earlier investors are paid for with funds from later investors. And this Ponzi scheme has a twist: It's an offer you can't refuse. You can't opt out (unless you're Amish). Contribute or go to jail.

Again, your Social Security funds are gone. They have already been handed over to your parents and grandparents. There is nothing there for you. The money you expect to collect from this scheme will have to come from your children and grandchildren.

Two wrongs don't make a right last time we checked. The government stole your money. Would you have them steal from your children's money...and your children's children's money to make up for it? Do you subscribe to the Warren Buffett school of morality wherein more theft is a fine way to cover up past theft and misallocation?

Not to put too fine a point on it, but I really don't think you're going to make out with this federally-instituted transfer scheme as well as dear Ida.

Looking for capital preservation? Thinking of Buying Gold? Make it more cost-effective – and safer – when you buy through BullionVault...