END_OF_DOCUMENT_TOKEN_TO_BE_REPLACED

The sorry history of US social security...

SEVENTY-FIVE years ago, in the depths of a depression – and with a stroke of a pen – President Roosevelt created programs that would morph into the biggest mandatory spending initiatives of the US federal government, writes Addison Wiggin, publisher of The Daily Reckoning.

We like the original name better: Federal Old Age, Survivors and Disability Insurance. In its original form, that's what it was: An insurance plan – as in, most people might not need it.

Today, over 20 million Americans have more than one Social Security number associated with their name. More than 100,000 have five or more numbers, and according to consumer risk-management firm ID Analytics, only 15-20% of those cases are related to fraud.

"The majority of these cases are likely due to data entry errors," says an executive with ID Analytics, "which occur somewhere along the food chain of these credit applications and then they propagate in the system."

The politicians representing your district couldn't be happier. They get to blame each other and give you false reasons to enter the voting booth this fall...at the same time! Whoopee.

"We will continue to highlight the Democratic Party's role in strengthening [Social Security] and the Republican Party's role in opposing it," said DNC national chairman Tim Kaine in a speech on Friday night, the day before Social Security's official anniversary. "So that is one of the themes for the fall: It's critical to elect Democrats who will stand with the president to protect Social Security."

The same Democrats that won the 2008 platform on "change" will be advocating aggressively this fall that any drastic change to Social Security is a full-on attack on your way of life. Just to be perfectly clear: "The Republicans advocating these changes are not friends of senior citizens," Kaine said.

As we've detailed ad nauseum, in books and film, the Social Security program in its current state failed to account for the baby boom generation. There aren't enough workers paying into the program to pay out benefits to those who need them. 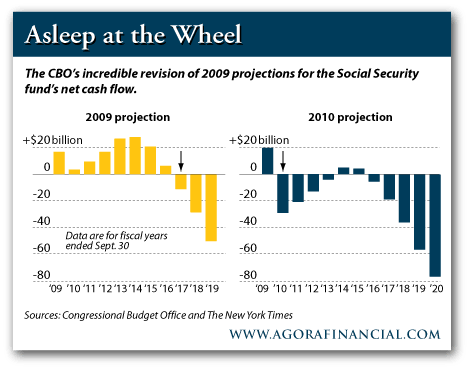 The current economic malaise only makes that structural flaw worse. "The problem," the New York Times helpfully suggested when we ran this chart of CBO projections back in March, "is that payments have risen more than expected during the downturn, because jobs disappeared and people applied for benefits sooner than they had planned. At the same time, the program's revenue has fallen sharply, because there are fewer paychecks to tax."

Still, as you have no doubt seen in reader mail, those who've paid in expect to get paid back. Rightfully so, since that's the bill of goods they've been sold since the dawn of the program...

"75 years of a fully paid-for insurance plan isn't bad," notes our income analyst Jim Nelson. "But frankly, neither the Republicans' plan to privatize the program or the Democrats' plan to do nearly nothing will fix the next 75 years.

"That's why smart investors are looking elsewhere to save for their own retirement.

"Most are completely unaware of how easy it is to avoid ever having to rely on Social Security. We found one way to actually lock in another country's 'pension plan.' And this one isn't having birthday parties or at center stage in an election-year demagoguery battle."