END_OF_DOCUMENT_TOKEN_TO_BE_REPLACED

Silver could yet set new highs despite last year's downtrend...

IT IS A FACT commonly known that Silver Prices are more volatile than those for gold, writes Andrey Dashkov at Casey Research.

This volatility – as you'll see in a minute – holds for corrections as well. On average, silver's retreats have been deeper and longer than gold's. Take a look at the three biggest for Silver Prices, along with how long it's taken to recover and establish new highs. 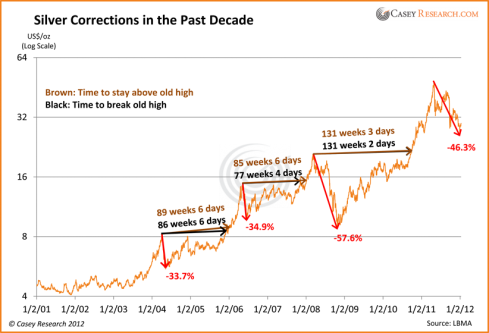 The three biggest silver corrections in the current bull market average to 42.1%.

Our recent correction is the second biggest on record since 2001, but what really makes it stand out is the duration. The 2004 and 2006 declines took only five and four weeks respectively to reach their low points. And it was 31 weeks after the crash of 2008 that silver bottomed. Our current decline, measured from the peak reached on April 28, 2011 to its December 29, 2011 low, spans 35 weeks… quite the determined downtrend.

So how long will it take to recover from the 2011 slump? We don't know the future, of course, but the current correction is close to the average of the three in the chart, so let's apply the average recovery time to our current situation. The average 42.1% correction took 98 weeks and 4 days to recover; using the same ratio, a 46.3% correction would take 108 weeks and 3 days. Counting from the previous peak of April 28, 2011, we wouldn't break the $48.70 high until May 26, 2013 (based on PM London Fix prices).

It shouldn't come as a surprise that silver will take longer to return to its old high than gold. Why? Half of silver's use is industrial, so a weak economy can drag down its demand. We certainly saw that in 2008.

And an exact date is pure conjecture, of course, and ignores fundamental factors that directly influence Silver Prices. 2011 is not 2008. In fact, we've already seen an interesting shift in investment activity in both gold and silver markets. The Silver Institute pointed out in a recent market report that "investor activity" was the biggest contributing factor to both last April's rally as well as September's selloff. Meanwhile, demand for physical metal has not only held firm but was projected by GFMS to reach a new record high in 2011.

Investment demand is rooted in the metal's monetary characteristics. It's not a stretch to say that we at Casey Research expect silver to regain its currency appeal soon, given the amount of worldwide fiat currency destruction. This will be perhaps the strongest catalyst for Silver Prices going forward. We wouldn't want to be without any silver.

Don't be the impatient investor who gives up too early. And trying to time the market for a short-term profit shouldn't be the strategy in the midst of a long-term bull market. Instead, keep silver's fundamentals in mind: its industrial uses are growing and, like gold, silver is money.

That said, we believe that the window for Buying Silver at $30 won't be open for too long. The profit you someday realize from silver will be made buying now, when the price is low.