END_OF_DOCUMENT_TOKEN_TO_BE_REPLACED

Silver market may not be as overheated as some people think...

As I write, silver American Eagles and Canadian Maple Leafs are sold out at their respective mints. Buying in India has gone through the roof. This is especially noteworthy among a people with a strong historical preference for gold. Demand in China continues unabated. Silver stocks have screamed upward.

So, as an investor looking to maximize my profit, I have a natural question. Is the silver trade getting too crowded, meaning we’re near the top? Have the masses finally joined the party such that we should consider exiting? After all, it’s not a profit until you take it, and you definitely want to sell near the top.

There are several ways to measure how crowded the silver market might be. I prefer to look strictly at the big picture and not get caught up in the weeds.

This means I'm looking for signs of market exhaustion or the masses rushing in. Nothing says "peak" more than an investment everyone is buying.

So how crowded are silver investments right now? Let’s first look at the ETFs. 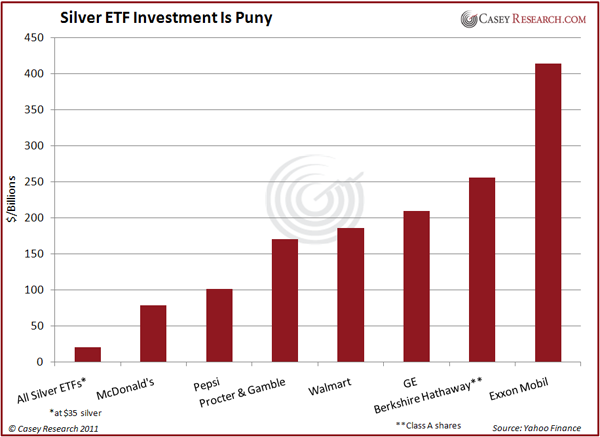 If Silver Prices are $35 an ounce, all ETFs backed by the metal amount to $20.7 billion. You can see how this compares to some popular stocks. All silver ETFs combined are less than a quarter of the market cap of McDonald's. They’re about 10% of GE, a company that still hasn’t recovered from the 2008 meltdown. Exxon Mobil is more than 20 times bigger. And this isn’t even apples-to-apples, as I'm comparing the entire silver ETF market to a few individual stocks.

This is even more interesting when you consider that it's the ETFs where most of the public – especially those that are new to the market – first invest in silver. So while the metal has doubled in the past seven months, total investment in the funds is still far beneath many popular blue-chip stocks.

Okay, maybe all this money is instead going into silver mining stocks. How does the market cap of the silver industry compare to other industries? 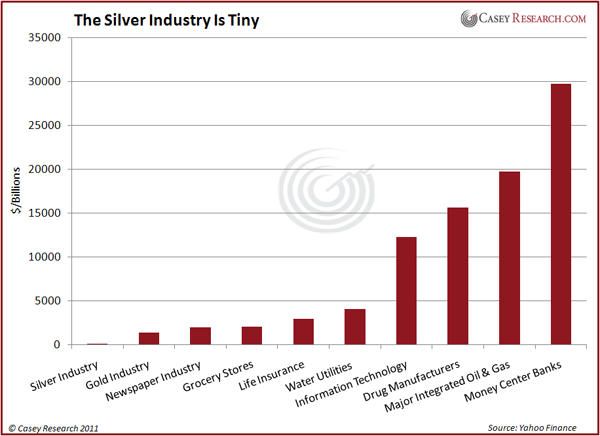 While you fetch your magnifying glass, I'll tell you that the market cap of the silver industry is $73.1 billion.

It barely registers when compared to a number of other industries I picked mostly at random. The dying newspaper industry is over 26 times bigger. Drug manufacturers are 213 times larger. Heck, even the Gold Bullion market is 19 times greater. And here’s the fun one: the market cap of the entire silver market, with all its record-setting prices and stock-screaming highs, represents just one-third of one percent of the oil and gas industry.

To be fair, there are a number of sectors that are smaller than silver. Radio broadcasters ($43.2B), video stores ($10.9B), and sporting goods stores ($2.5B) have puny market caps, too. But then again, who's buying DVDs or baseball mitts to protect their wealth from a coming inflation?

Silver hardly resembles the picture of an investment that is too crowded.

I'm not saying one should rush to buy silver right now. After all, it has doubled in seven months. Unless this is the beginning of the mania, prudence would certainly be called for at this juncture. The price will always ebb and flow in a bull market, and an ebb is overdue.

The question, of course, is from what price level it occurs. What if a correction doesn’t ensue until, say, a month from now, and the price then only falls back to where it is now?

I remember some articles in January that insisted silver would fall to as low as $22, and, well, they’re still waiting. In the meantime they’ve missed out on some huge gains. For silver to fall back to $22 now would require a 40% drop; not impossible, but I wouldn’t hold my breath.

Fixating on market timing takes your focus off the ultimate goal. In my opinion, instead of worrying about what will happen next week or even next month, focus on how many ounces you have, and then buy at regular intervals until you reach your desired allocation. This has the added benefit of smoothing out your cost basis. And don't forget to buy more as your assets and income increase.

This is a market where you'll want to be well ahead of the pack. Someday in the not-too-distant future, average investors will be tripping over themselves to join in. That will make the market caps of your silver investments look more like some of the others in the charts above. And that will do wonderful things to your portfolio.

Get the cheapest silver – and cut out the middleman – at Bullion Vault...