END_OF_DOCUMENT_TOKEN_TO_BE_REPLACED

The shape, size and dynamics of the silver investment market revealed...

AFTER SINKING almost 60% from its March 2008 peak of $21 an ounce, silver appears to be on the rebound, writes Lara Crigger at Hard Assets Investor.

Silver gained 24% back in the first quarter of 2009, outstripping the 4.5% gain in US-Dollar Gold Prices dramatically.

With a track record of strong performance during economic crises, silver might seem particularly well poised to weather the current storm, especially with the impending threat of inflation. But if silver has so much potential, why is it still so hush-hush among investors?

"Frankly, I don't know," says David Morgan, founder of The Silver Investor and editor-in-chief of the monthly precious metals research guide, The Morgan Report. As one of silver's most vocal bulls, Morgan has spent more than 30 years educating investors about this often-overlooked metal.

"Personally, I suspect people don't gravitate to silver because the market is so misunderstood," Morgan said in an interview last week. "They just don't understand the how, the where and the why."

Unlike Gold Bullion, says Morgan, which is used predominately as a store of value, "silver has a dual personality, as both an industrial and monetary asset."

Silver's innate physical properties make it an ideal ingredient in several industrial applications. As nature's best electrical and thermal conductor, the metal is perfect for high-performance electronics or high-voltage circuits. Silver's high reflectivity makes it a must for fine-precision optics, and photosensitive silver compounds are the engine behind photographic film. The metal is even a natural biocide, which is handy in sterilization and treating wounds.

Given silver's valuable characteristics, it's not a big surprise that industrial demand for the metal has risen every year since 2001. The industrial sector now accounts for 54% of global silver usage. (The remainder breaks down into luxury demand – namely, the jewelry trade – and investment demand.)

"Not only is industry the fastest-growing segment of demand for silver, it's also the largest," says Morgan. And demand could continue to grow long term, he believes, since silver is a component in many up-and-coming "green" technologies.

"Silver is a very clean metal, a very green metal," says Morgan. "And it's also inelastically priced: For some applications, no matter how you price it, you have to use silver."

Another growing demand comes from silver ETFs, which despite their relative newness, have attracted a significant following among individual investors and institutions such as pensions and insurance companies, which can't access the derivatives market under the terms of their charters. Combined, the silver ETFs added 63.5 million ounces to their stocks throughout the first three months of 2009, and the iShares Silver Trust ETF now holds over 270 million ounces of fine silver – roughly three-fifths the total silver stocks, says Morgan. (Chart courtesy of GFMS Ltd, the London-based consultancy, in conjunction with the Silver Institute...) 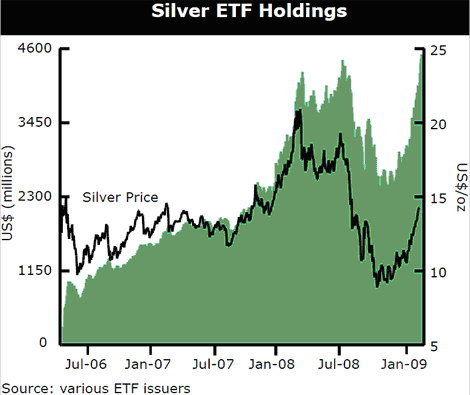 "Silver ETFs are far more of a dominant factor in the silver market than Gold ETFs are in the gold market," he says. "Gold's just a much bigger market."

The silver market is also a different shape from gold on the supply-side, too. Approximately 70% of the silver mined each year is actually a by-product of other activities, typically extracted from alloys and ores of gold, copper, nickel, lead and zinc. That means base metals miners and the big diversified natural resources companies often have great control over silver prices – for better or worse.

"If you're a copper miner, you don't care about the price of silver. You just pass it off to your bank for them to sell at any price they like. That puts a lot of pressure on silver prices," explains Morgan.

However, as the global recession has dampened industrial demand worldwide, there has been decreased activity among base metals producers. Less metal being mined means declining silver stocks; thus Silver Inventory at the Comex warehouse in New York fell sharply between November 2008 and March 2009, dropping from almost 80 million ounces to roughly 70 million.

Additional disturbances in the base metals supply chain could benefit silver's prices further. For example, if the swine flu outbreak becomes a significant pandemic, it could cause supply disruptions from Mexico, which is the world's second-largest silver producer.

Looking ahead for Silver Investment Demand, the fortunes of silver and gold have historically been inextricably linked, due to their shared use as stores of value. But even though the two metals are almost 85% correlated in terms of price movements, they're not interchangeable assets.

"Gold's monetary role is primarily in the doom-and-gloom market. If the financial system explodes, then gold will protect you," says Morgan. "Silver, on the other hand, is the best 'good-time' metal out there, because it's used in so many high-tech, high-end products."

Currently, the Gold-Silver Ratio hovers around 70 (i.e., one ounce of gold will buy 70 ounces of silver, a dramatic historic high for gold's valuation). In the past few years this Gold/Silver Ratio has ranged anywhere from 30 to 100. But in 1792, back when the metal was still used for money worldwide, US law fixed the ratio at 15.

The Founding Fathers may have been closer to the mark than the modern market. Because to a large extent, the current high ratio is artificial – and only jumped after the demonetization of silver in the 1960s.

"The natural Gold/Silver Ratio, or the amount of silver coming out of the ground relative to gold, is closer to 8 to 1," says Morgan. "The current gold/silver ratio is just a function of how much people value one metal over the other."

When it comes to inflation, however, investors definitely know their preference: Gold Investment. It's nearly a matter of religious belief with many investors that investing in the yellow metal works as a hedge against inflation, but silver has historically performed just as well (and at a lower entry price point, too).

"Silver has established itself as one of the best assets to have when dealing with inflationary pressures," says Morgan. But the problem with silver is that historically it's been a far more volatile market than gold, and subject to significant price movements based on the actions of a few big players.

For example, in 1997, when Warren Buffett bought 130 million troy ounces of silver, prices leapt from $5 to $8 almost overnight. And in 1979, when the Hunt Brothers tried to corner the silver market, their willy-nilly metal grab sent prices skyrocketing from $11 to $50 per ounce in a matter of months. And after the Federal Reserve changed the rules on leverage in 1980, silver prices collapsed back below $11 per ounce just two months later.

"Silver's volatility does keep a lot of investors away, and that volatility will continue for at least the next few years," says Morgan. "But if you look at what's going on right now in our financial system and the destruction of the US Dollar, you wouldn't have a problem taking a position in gold and silver, because those are probably the two assets that will come out of this thing best."

Investors looking for access to physical silver have a range of available options: bars, coins, the ETFs, futures. But given the current investor desire for safe havens, bullion demand has been especially strong recently; data for the top four silver bullion coins shows a combined 93% upswing in first quarter sales year over year, according to the GFMS consultancy.

If storage is a problem, US investors can also access physical metal via the aforementioned iShares Silver Trust ETF. Investors can also try silver futures, which trade on the COMEX, or a futures-tracking ETF like the PowerShares DB Silver Fund. But Morgan prefers top-tier mining companies over futures plays.

"With mining companies, you can get leverage for both the upside and downside, just like a futures contract – but they carry far less risk," he says.

For the metal's price, Morgan predicts that continuing financial instability will push silver higher throughout 2009. "I think silver will establish a wide trading range this summer," he believes. "But by early fall, we should start to see strength. By late 2009 into first quarter 2010, I'm looking for it to go beyond the $21 level it established in 2008."

The key, says Morgan, is the $25 an ounce point. "Once we get to that level and stay there for at least three or four consecutive trading days, I think you'll start to see a real acceleration in the silver market," he says.
"After that, how high is high? No one knows. There's no upside resistance once we break through that level, because anybody who owns silver is going to say, 'Well, I'm not going to sell now...'

"And that's when we'll see those markets really start to accelerate."