END_OF_DOCUMENT_TOKEN_TO_BE_REPLACED

Is a move into allocated Silver Bullion driving the price higher...?

SO LIQUIDITY is again flowing into oil, gold, silver and other commodities as the Big Markets bounce back, writes Gene Arensberg in his Got Gold Report.

This inflow comes despite (or perhaps due to) unsettling geopolitical uncertainty in North Africa and renewed focus on European budgetary and fiscal misery. Now we see rioting in the UK, of all places. We don't want to sound incendiary, but isn't that where much of the world's precious metals are stored? You know, because it is "stable" there? Just a question.

More trouble in Europe, more uncertainty for traders, portfolio managers and investors to worry over. Now there is trouble in Syria, in Yemen...and a basket of countries that are either oil producers or way too close to the ones that are for "comfort".

In an uncertain, super-loose liquidity world, capital flows into "stuff," which is limited in supply and always in demand, and it flows out of bloated fiat currencies, where the supply is endless and can be increased with a few keystrokes on a central bank's computer. Wealth seeking refuge from dilution about sums it up over time.

Unfortunately the abundant "nearly free liquidity" being thrown into the system by central banks ends up boosting raw food and fuel prices, a lot. For much of the world, living in repressive regimes, where tens of millions of people are living in the grip of government-imposed poverty, even small increases in food and fuel prices create hardship and despair. Large increases can mean the difference between stability and chaos, as hunger is one of the more powerful motivators of the populace.

As the weak underbelly of the Euro is being exposed, and as all the other fiat currency alternatives seem to be in a race to devalue one way or another, whether they "want" to or not, is it really all that hard to understand that capital is migrating to where it feels "safe"? In a world that has increased the global money supply by 900% (some experts say more than 1,000%) since 1980, is it really any wonder that "stuff" is becoming apparently more expensive?

We Vultures know that tangible goods and commodities are not really becoming more expensive. They are simply reflecting true supply and demand over time, while they oscillate between periods of being overbought and oversold. They are merely measuring the pernicious global inflation of the money supply by governments that has already occurred.

The medicine or poison (your pick) has already been given to the patient. It just takes time to show up in the bloodstream and for the full effects to materialize. Tests (prices of goods and commodities) show that the medicine is performing now, don't they? No one should be the least surprised by it. But are we closer to overbought or oversold in the current phase of these markets?

Silver once again has been strongly outperforming gold as expected. Silver Price resistance we find indefinable, but very strong resistance showed as it approached and probed $38. Gold attempted a breakout, but could not follow through last week.

Once again, the highest close for silver on a Commitment of Traders' reporting Tuesday saw a fairly large increase in silver futures open interest, suggesting "opposition" showing or perhaps attempting to establish a beachhead. The Gold/Silver Ratio falling to 38 ounces silver to buy an ounce of gold was again the lowest weekly reading in 28 years, showing strength in demand as both metals rise. Mining shares last week answered the metals higher, strongly-so for the larger miners. But contraction of the hi-lo price spreads suggest waning momentum very short term. 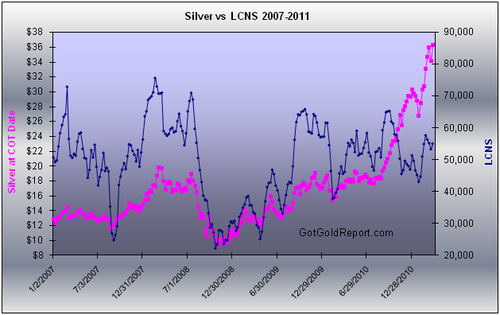 As silver recovered from its minimal swoon to the $33s and back up into the $36s, the Large Commercial traders basically returned to about the same net positioning as they were in the $36s two weeks ago. This is hardly the kind of "action" we might call aggressive selling by the commercials.

Comparing the nominal silver LCNS to the total open interest, we think this gives us a better idea of the relative positioning of the largest hedgers and short sellers – the Producer/Merchants and the Swap Dealers combined into a single category – compared to all the other traders on the Comex. And when compared to all contracts open, the relative commercial net short positioning (LCNS:TO) for silver edged slightly higher last week from 39.6% to a still moderate 40.6%.

By moderate we mean that with silver at and/or near new 31-year highs again; with silver at the highest nominal price on a reporting Tuesday of this bull market, the LCNS:TO is still not all that high, still remarkably under 45%. The large commercial traders are not yet showing signs of being very confident in lower Silver Prices, having had to cover a good deal of their net short positioning in last year's commercial retreat.

On the other hand they are now more net short than they were in February when silver moved down to test the $26 region. We can say that the commercials are more confident in lower Silver Prices near $38 than they were near $26. But they have not yet become aggressive in that view.

Backwardation in the silver futures strip, reports of tight physical supplies of commercial sized silver bars, numerous reports of strange, immense and determined dip buying in size continue to govern the tiny silver market. With silver probing new high prices, the largest, best funded and presumably the best informed commercial traders of silver futures remain nowhere near a record net short position and well under the levels we would normally consider as cautionary. However, this is anything but a normal period.

On balance, and thinking very short term, we have to view last week's Commitment of Traders report for silver as more bullish than bearish. We believe the heaviest, most determined source of demand is surfacing in the largest physical metal markets overseas (primarily in the UK and perhaps in Switzerland). There is strong, informed speculation of a sustained rush by holders of unallocated metal investments to convert those less-secure metal holdings into more expensive to hold, but more secure allocated storage. As confidence in banks in general and bullion banks in particular declines, the propensity of metal investors to demand real allocated, defined metal and higher security is ascending.

Certainly we cannot account for the recent historic run up in price with action in the futures markets. We are likely witness to at least the perception of, if not an actual physical squeeze of sorts as dealers, warehousemen and operators that have sold "silver" to investors and speculators in unallocated accounts are now having to locate and allocate actual physical Silver Bar stocks...real metal...to their clients.

We do not mean to suggest that conversion of unallocated metal to safer allocated Silver Bullion is the only driver behind silver's spectacular price advance. Clearly it is merely one of many drivers. But we think it probably served as the long-awaited tipping point – the trigger event as we called it in prior work.