END_OF_DOCUMENT_TOKEN_TO_BE_REPLACED

Silver Prices just keep on rising. But how much further could they go to catch gold...?

LAST MONTH gold broke into new record territory – reaching an all-time high of $1387 per ounce on October 14, writes David Galland, managing director of Casey Research...just before gold broke to new highs above $1390 at the start of November.

A new record in nominal terms, that is. To top the previous high in inflation-adjusted Dollars, gold will have to approximately double from there.

Silver, however, has barely made it halfway back to its prior nominal high of $49.45 an ounce, achieved on January 21, 1980. In order to break into new territory in inflation-adjusted Dollars (using the same CPI calculation methodology used in 1980), silver would have to rise to over $250 an ounce – more than ten times where it is today.

Here are some other useful facts about silver:

Kicking off his presentation at our recent Gold & Resource Summit, Bob Quartermain, the powerhouse behind Silver Standard (SSO), stated that if the audience took nothing else away from his talk, it should be that the demand for silver well exceeds new mine supply, and has for some time.

For instance, in 2009 total silver demand topped 889 million ounces, outstripping new mine supplies of 710 million ounces. The difference was made up by scrap recycling.

Of course, the real pressure going forward is from Silver Investment demand, which has been a fraction of that for gold. If history is any guide, however, as gold becomes viewed as being too expensive for the "common man", silver sales will soar. 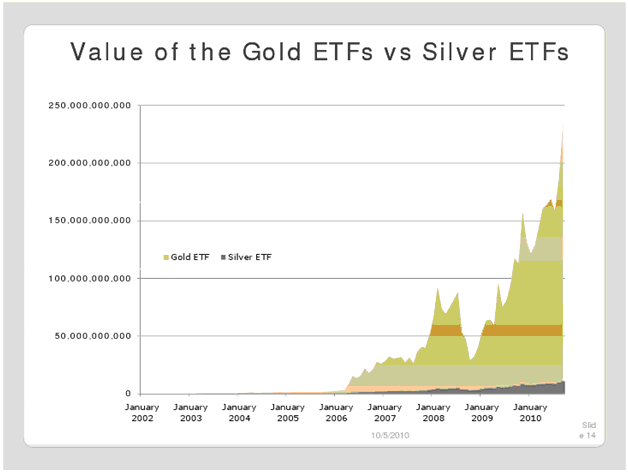 Furthermore, if you agree with our contention that the economic crisis will continue, and that China's propped-up manufacturing sector will come under serious pressure, it's also logical to assume that demand for industrial metals such as lead, zinc, and copper will fall. That's important in the discussion of silver, because only 30% of silver's production comes from primary producers (i.e., silver mines), with the balance produced only as a byproduct of other minerals.

Of the total new mine supply, fully 57% is associated with base metals production.

As it, too, has industrial applications, demand for silver from manufacturers will also falter, but given the existing deficit in supplies, the surge in investor demand, and silver's growing use as a "green" metal (50 to 60 million ounces used up in solar energy applications in 2010 alone) and as an antibacterial agent, the overall supply/demand picture remains favorable.

The truly miniscule amount of silver available above ground and its relatively modest price gains over the course of the precious metals bull market so far are what set the stage for it to play a quick game of catch-up to gold in the months just ahead.

And when Silver Prices do a runner, the handful of pure play silver mining companies – producers and juniors that have identified large deposits – will do the equivalent of a moon shot.

Just a heads up on something to pay attention to, especially on days when the precious metals take a breather from their steady ascent.