END_OF_DOCUMENT_TOKEN_TO_BE_REPLACED

Thrifting hurt PV silver demand, but China adding half world's new 2016 solar capacity...
SILVER demand from the solar energy sector will likely set a new record in 2016 say leading analysts.
That should account for more than 1 ounce of silver in every 6 used by all industries, as the pace of new photovoltaic installations worldwide reaches a fourth consecutive record high.
China alone installed 7.1 gigawatts of new PV capacity in the first quarter of 2016 according to the country's National Energy Association. Matching 40% of last year's record solar installations in China, and with energy capacity equivalent to 8 of the country's 30 nuclear power stations currently in operation, that equals 12% of 2015's record PV addition around the globe.
At this pace, the world's second-largest economy would account for half of 2016's total projected solar-panel installations.
Silver paste is used in 90% of the world's most common solar panels (crystalline silicon photovoltaic cells) according to mining and trade representatives The Silver Institute in Washington, DC.
Global PV installation could add 64.7 gigawatts of capacity in 2016, reckons Mercom Capital, a specialist clean-energy consultancy.
Solar-sector silver demand "could well exceed 2,600 tonnes," say precious metal analysts Metals Focus, "accounting for around 17% of global industrial offtake" in 2016.
A decade ago, photovoltaics consumed barely 2% of global industrial silver demand. That jumped to 11% by 2011 according to data from analysts Thomson Reuters GFMS.
Photographic demand, the No.1 use for silver throughout the 20th century, had meantime collapsed by two-thirds in the five years starting 2006, sliding from 25% to just 9% of silver industrial off-take.
But silver prices then surged to near-records at $50 per ounce, costing 75% more across 2011 on average from the year before. Urgent research and development focused on cutting the PV industry's reliance on silver. Known as "thrifting", that reduction in the silver needed per watt of energy output has since exceeded 80% in some solar cell manufacturing. 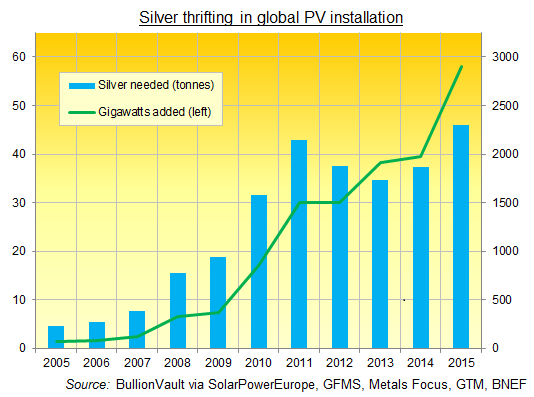 Until 2015, when silver prices fell to new 6-year lows, 2011 proved the peak for PV silver demand, with some 2,150 tonnes of silver used to install an estimated 27.7 gigawatts of solar-energy capacity according to GFMS metals analysis.
Last year the world installed twice as much new solar capacity according to two separate estimates, a massive 57 gigawatts according to global data provider Bloomberg's New Energy Finance consultancy (BNEF) if not 59 gigawatts according to consultancy GTM Research – a rise in 2015 of more than one-third from 2014's addition.
But the amount of silver needed per watt has collapsed, capping PV silver demand at 2,300 tonnes on Metals Focus' latest estimate of 2015 demand.