END_OF_DOCUMENT_TOKEN_TO_BE_REPLACED

GOLD retreated from new 9-month highs Tuesday and silver also edged lower after recovering all of yesterday's $1 down-spike, spurring the heaviest 1-day inflows to the giant SLV silver ETF since the attempted #silversqueeze price ramp peaked 2 years ago next week.
Having fixed at $23.675 per ounce at midday Monday's London benchmarking auction, silver sank 3.9% in spot trade over the next 3 hours, falling through $23 per ounce for the 1st time in 5 weeks as the US Dollar rose sharply on the currency market.
Silver bullion prices finally bottomed at $22.77 as London's 3pm gold benchmarking auction set a 1-week low beneath $1915.
Gold this morning rallied to its highest against a steadier US Dollar since mid-April above $1942 before retreating 0.7% to erase all this week's gains so far.
With China's wholesale bullion markets shut meantime for the Lunar New Year spring festival holidays, silver's "largest buyer [is] out," says a note from Swiss refining and finance group MKS Pamp.
"[That means] predatory selling can capitalize on an asset class that has traded weakly...seemingly hitting stops through $23.60 [having] been a laggard to gold's resilience all year, with notable selling from the east and perhaps producer-related flows keeping prices capped."
Silver's spike down to 6-week lows in Dollar terms on Monday saw the heaviest 1-day inflows to the iShares Silver Trust (NYSEArca: SLV) since 2 February 2021, peak of the #silversqueeze ramp by anonymous voices on social media.
That phenomenon grew the giant ETF by 3,416 tonnes in 3 sessions and took bullion prices within 1 cent of $30 per ounce. 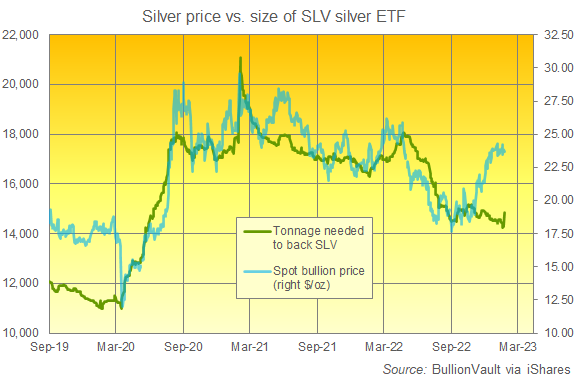 Yesterday's SLV inflows were equal to more than 8 days' global mine output.
The move was little noticed on or outside discussion site Reddit however, and because it came after a steady run of outflows from the SLV, yesterday's 572-tonne growth took the size of the world's largest silver-backed ETF only back to 7-week highs, smaller by 30% from February 2021's record high.
Like gold – whose major gold ETF trust funds were unchanged in size Monday – "Silver will also benefit from [this year's] favourable macro environment of a weaker Dollar, falling yields and still-high inflation," says a 2023 precious metals outlook from Japanese automaker and conglomerate Mitsubishi.
US interest rates will rise by just 0.25 percentage points at next week's Federal Reserve meeting, says now universal betting on futures contracts at the CME derivatives exchange.
Rising to a ceiling of 4.75%, the Fed's policy rate will then end 2023 unchanged according to 4-in-5 bets on December's decision.
New 'flash' data for January today reported a steeper than expected decline in business activity in Australia and the UK, but a stabilization in Japan and the Eurozone on the S&P rating agency's preliminary PMI surveys.
US economic activity is shrinking for the 7th month running, S&P then said, but the pace of decline is the slowest since December.
"Although regional economic slowdowns do create headwinds for industrial demand," says Jonathan Butler at Mitsubishi's precious metals division, "some of silver’s key growth areas in the solar PV space and in-vehicle electrification are already baked in from prior investment decisions and long-term market trends.
"Limited mine supply growth and rising demand will push the market into a fundamental supply-demand deficit this year which, combined with depleted stocks on exchanges, should keep market conditions tight and provide underlying price support."