END_OF_DOCUMENT_TOKEN_TO_BE_REPLACED

8 reasons silver prices could rise sharply from today's "undervalued" level...
JIM ROGERS once quipped that he waits to invest until "there's a pile of money just sitting there in a corner and I can walk over and pick it up," writes Jeff Clark at Casey Research.
In other words, an asset that's deeply undervalued, widely ignored, with potent fundamentals ready to kick in.
Is there such an opportunity in any of the precious metals right now?
One could make a case for all of them, given the likelihood of high inflation and the mainstream largely ignoring the industry.
But there's one metal in particular that I think will deliver the most fireworks. Silver is selling at less than half its 2011 high, is ignored more than gold, and as you'll see, has explosive fundamentals that point to a possible runaway price scenario.
To assess silver's potential, let's first ignore short-term factors that you might see in mainstream headlines, such as net short/long positions, fluctuations in weekly ETF holdings, or the latest open interest. Data like these fluctuate regularly and rarely have long-term bearing on the price.
Let's instead consider the big-picture forces that could impact silver over the next several years. Here are the data that tell me "there's a pile of money sitting in the corner..."
#1: Monetary Abuse
The most significant catalyst for silver is the government's abuse of our monetary system. In a world of endless fiat money printing and unsustainable debt, silver (like gold) represents a wealth protection against systemic risk.
At no time in history has a government printed this much money. And not one currency in the world is anchored to gold or any other tangible standard. This unprecedented setup means that whatever fallout results, it will be historic and affect each of us personally. Silver will be one refuge from that storm – and given its higher volatility, could rise more than gold.
#2: Inflation-Adjusted Price Has a Long Way to Go
One specific indicator of silver's potential is its inflation-adjusted price. I asked John Williams of ShadowStats to calculate the silver price in May 2014 Dollars (current data are not yet available).
Shown below is the silver price adjusted for both the CPI-U, as calculated by the Bureau of Labor Statistics; and for ShadowStats data based on the CPI-U formula from 1980 (the formula has since been adjusted multiple times to keep the inflation number as low as possible).

The $48 peak in April 2011 was less than half the inflation-adjusted price of January 1980, based on the current CPI-U calculation. If we use the 1980 formula to measure inflation, silver would need to top $470 to beat that peak.
I'm not counting on silver going that high (at least I hope not, because I think there will be literal blood in the streets if it does). But clearly, the odds are skewed to the upside – and there's a lot of room to run.
#3: Tight Production Margins
Producers have been forced to reduce costs in light of last year's crash in the silver price. Some have done a better job at this than others, but look how far margins have fallen.

Relative to the cost of production, the silver price is at its lowest level since 2005. Keep in mind that cash costs are only a portion of all-in expenses, and that the silver price has historically traded well above this figure (all-in costs are just now being widely reported). That margins have tightened so dramatically is not sustainable on a long-term basis without affecting the industry. It also makes it likely that prices have bottomed, since producers can only cut expenses so much.
Although roughly 75% of silver is produced as a byproduct, prices are determined at the margin; if a mine can't operate profitably or a new project won't earn a profit at current prices, output would fall. Further, much of the current cost-cutting has come from reduced exploration budgets, which will curtail future supply. Sooner or later this supply deficit will serve as a catalyst for higher prices.
#4: Low Inventories
Various entities hold inventories of silver bullion, which were high when US coinage contained silver. As all US coins intended for circulation have been minted from base metals for decades, the need for high inventories is thus lower today. But this chart shows that little is available.

You can see how low current inventories are on a historical basis, most of which is held in exchange-traded products (ETPs). This is important because these investors have been net buyers since 2005 and thus have kept that metal off the market. The remaining amount of inventory is 241 million ounces, only 25% of one year's supply – whereas in 1990 it represented roughly eight times supply. If demand were to suddenly surge, those needs could not be met by existing inventories. In fact, ETP investors would likely take more metal off the market. (The "implied unreported stocks" refers to private and other unreported depositories around the world, a number that also has shrunk strikingly.)
If investment demand were to repeat the surge it saw from 2005 to 2009, it would leave little room for error on the supply side.
#5: Conclusion of the Bear Market
This snapshot of six decades of bear markets signals that ours is near exhaustion. The yellow line represents silver's price action from April 2011 through July 11, 2014.

The historical record suggests that buying silver now is a low-risk investment.
#6: Cheap Compared to Other Commodities
Here's how the silver price compares to other precious metals, along with the most common base metals. 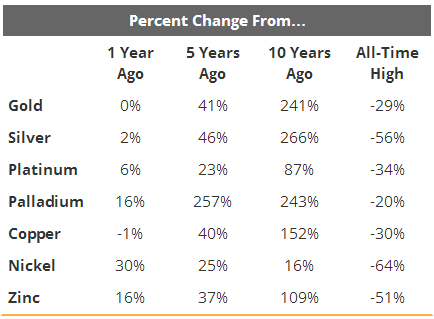 Only nickel is further away from its all-time high than silver.
#7: Low Mainstream Participation
Another indicator of silver's potential is how much it represents of global financial wealth, compared to its percentage when silver hit $50 in 1980.

In spite of ongoing strong demand for physical metal, silver currently represents only 0.01% of the world's financial wealth. This is one-twenty-fifth its 1980 level. Even that big price spike we saw in 2011 pales in comparison.
There's an enormous amount of room for silver to become a greater part of the mainstream investment community.
#8: Watch Out For China!
It's not just gold that is moving from West to East. Silver market trading volumes rose sharply last year, mostly a result of the Shanghai Futures Exchange (SHFE) initiating overnight trading.

Don't look now, but the SHFE has overtaken the Comex and become the world's largest futures silver exchange. In fact, the SHFE accounted for 48.6% of all volume last year. The Comex, meanwhile, is in sharp decline, falling from 93.4% market share as recently as 2001 to less than half that amount today.
What's more, domestic silver supply in China is expected to hit an all-time high and exceed 250 million ounces this year (between mine production, imports, and scrap). By comparison, it was less than 70 million ounces in 2000. However, virtually none of this is exported and is thus unavailable to the world market.
Chinese investors are estimated to have purchased 22 million ounces of silver in 2013, the second-largest amount behind India. It was zero in 1999.
The biggest percentage growth in silver applications comes from China. Photography, jewelry, silverware, electronics, batteries, solar panels, brazing alloys, and biocides uses are all growing at a faster clip in China than any other country in the world.
Based on this review of big-picture data, what conclusion would you draw? If you're like me, you're forced to acknowledge that the next few years could be a very exciting time for silver investors.
Attachments: