END_OF_DOCUMENT_TOKEN_TO_BE_REPLACED

Mono- vs. bimetallism...
I WAS engaged in a debate with George Selgin of the Cato Institute, who is one of our best monetary historians, writes Nathan Lewis of New World Economics.
Talking with George often inspires me to talk more about an interesting topic.
I was complaining that, too often, the bimetallic systems that were common throughout the world before 1870 are characterized as "not a gold standard."
Obviously, they are not monometallic gold standards, but bimetallic systems. But the gold parity for the Dollar was $20.67 per ounce during the bimetallic era in 1840, and it was also $20.67 per ounce during the monometallic era in 1910. The value of the Dollar was basically unchanged vs. gold.
So we could engage in a long discussion about minor particulars, but the main fact is: the Dollar's value was unchanged vs. gold.
Bimetallism is the practice of treating gold and silver as if they had a fixed value ratio. For example, the Coinage Act of 1792 defines a one-Dollar coin as containing 371.25 grains (24.1 grams) of pure silver, and a $10.00 coin as containing 247.5 grains (16.04 grams) of gold (or 24.75 grains per Dollar).
Because 371.25/24.75=15, the statutory silver:gold ratio was 15:1.
This system only works when the market values of silver and gold are very stable against each other, which was common throughout history before 1870.
Here is what the actual market silver:gold ratio looked like: 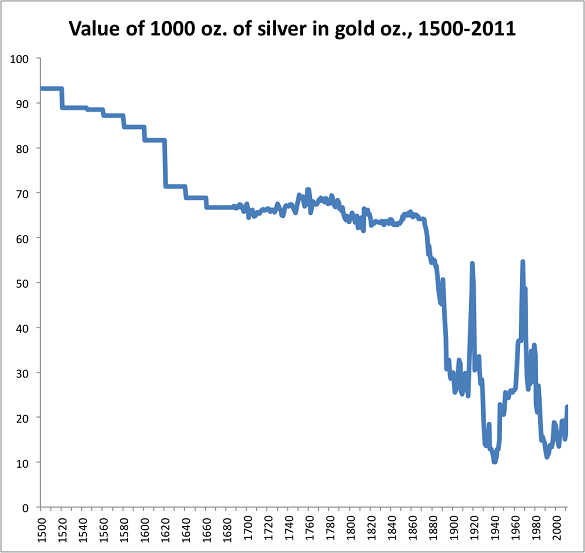 The stepwise movement before 1700 simply denotes the shortage of datapoints for that period. Probably, it was a long, smooth decline, with annual variation around that long-term trend similar to what we see in the annual data after 1700.
The decline from about 10.5:1 in 1500 to 15:1 in 1700 was largely due to the huge increase in silver mining that followed the Spanish colonization of the New World. It looks big on this chart, but remember that this was spread over two centuries. In today's terms, it would be like the Euro/Dollar exchange rate declining from $1.50 to $1.05 over a period of 200 years, a little bit each year. In the space of any single decade, this trend would hardly be noticeable.
Think of the Euro/Dollar exchange rate gently trending down between 1820 (James Monroe was President) and 2020, today. Thus, the practical experience was that the silver/gold ratio didn't change much. A government could adjust the official bimetallic ratio to reflect market values once every few decades.
In practice, there was a tendency for the "value of the Dollar" to reflect whatever was "cheapest to deliver" – gold or silver. For example, if you had a debt of $10, you could pay in terms of ten one-Dollar silver coins each containing 371.25 grains of silver, or in terms of one ten-Dollar gold coin, containing 247.5 grains of gold. There would be a tendency to pay the debt using whichever "version of the Dollar" (the silver version or the gold version) had the lowest market value, or was "cheapest to deliver." Thus, we could argue that the effective market value of the Dollar was the silver value when silver was cheapest, and the gold value when gold was cheapest.
This was not quite true in practice. In practice, the differences between gold and silver might be minor enough that people just used silver or gold coins at their face value, without thinking about it very much.
But, let's see what the results of this would have been. 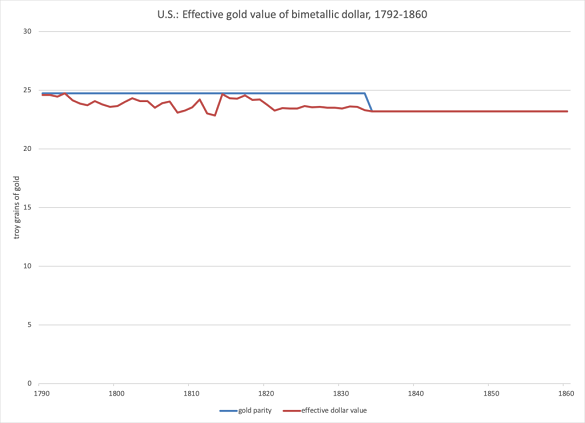 The blue line is the gold parity within the pre-1860 bimetallic system. (After 1860, the Dollar became a floating currency during the Civil War, and then was on an effective monometallic system that was formalized in 1900.) The red line is the effective value: when silver is "cheapest to deliver", then the value of the Dollar is assumed to be silver, whose market value of course has a little variance vs. gold.
When gold is the "cheapest to deliver", then the market value of the Dollar is assumed to be the same as the gold parity. In 1834, the official bimetallic parity was adjusted to a 16:1 ratio. In other words, the silver version of the Dollar still had an unchanged 371.25 grains of silver, but the gold version was reduced to 23.2 grains.
This made gold the cheapest to deliver after 1834, so the value of the Dollar after 1834 was no different than if there was a monometallic gold standard system. In Britain, the bimetallic gold parity was changed in 1717 (by Isaac Newton), which made gold the cheapest to deliver in Britain. This effectively ended centuries in which the primary basis of the British Poundwas silver. After 1717, it was effectively gold, although it was still a bimetallic system until monometallism was officially adopted in 1816.
We can see here what I mean when I say that bimetallism was effectively no different than a monometallic gold standard system. Silver's market value was stable enough vs. gold (except in the very long term) that gold and silver were effectively interchangeable, which was the basis of the bimetallic system to begin with, and is necessary for the system to function at all. The little bit of variation (red line) vs. gold in this graph is irrelevant, considering the conditions of the time.
In practice, it is variation of about +-2% around a central tendency. That's similar to the Euro varying vs the Dollar between about $1.275 and $1.225, with a central tendency of $1.250.
For some reason, this little bit of variation bothers people today, which is weird when you consider the kind of currency chaos that they have lived in all their lives.
Unfortunately, it appears that most academics today also have trouble with this idea. 99.99% of academic economists today are fiat currency advocates, so they are always eager to misrepresent the gold standard (and bimetallic) systems. Plus, probably, they really have no good idea of how things worked in those days.
Since 1870, silver's market value has been wildly variable, and they probably assume that was true then too. If that was the case, then a bimetallic system would indeed be very different from a monometallic gold standard system. But, no bimetallic system could exist under such conditions anyway.
Because the market value of gold and silver were quite stable, they acted as a unified worldwide system, which I have called the "gold/silver complex". This was the basis on which bimetallism was possible. Even a country which was highly silver-centric, such as Mexico or China in 1840, would have a currency (coinage) whose value did not vary much against a country that was strictly on a gold monometallic basis, such as Britain in 1840. It was, effectively, all one system, and since nobody knows what I'm talking about when I call it "the gold/silver complex," I just call it the gold standard system, because that is what it eventually became after 1870.
For example, I would say that the US used the gold standard system from 1789 to 1971, a period of 182 years, with some major lapses around wartime, one permanent step-devaluation (in 1933), one bimetallic adjustment (in 1834), and a few minor lapses. Of course, you can also have a much more detailed explanation than this, which might include a discussion of bimetallism. But, I think that is the essence of it.