END_OF_DOCUMENT_TOKEN_TO_BE_REPLACED

...will we all die before it rallies?

I AM a chart guy who all too often bores you (and me) to death with ratio and indicator charts and all too seldom makes charts just for the fun of it anymore, writes Gary Tanashian in his Notes from the Rabbit Hole.

So this long-term silver chart is just for the fun of it. What do we have here?

So okay, there are at least two caution points if you want to take the long-term chart seriously. 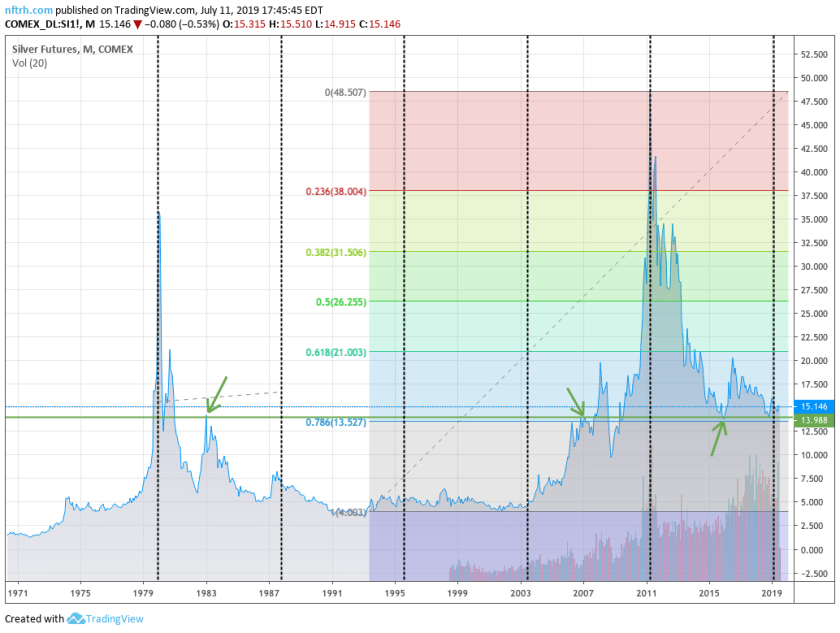 That said, nothing's changed. I am bullish on silver at this time and prepared to get more bullish if/when it takes over for gold. But obviously, that very important support around 14 that silver twice tested in the last year and three times tested in the last 5 needs to hold.

Final note: Daily charts inform the weeklies and both of those inform the big, lumbering monthlies. That is why so much you see on a big picture chart is either not actionable on a reasonable time frame or subordinate to what is going on with the shorter-term charts.

We manage those closely each week in NFTRH. Not just for silver, gold and the miners, but for the whole US and global macro shootin' match.

And if you haven't noticed, things are getting interesting there. In the precious metals sure, but also in bonds/indicators and a little market I like to call the USS Good Ship Lollypop AKA the S&P 500, which is near our target now, but which has two very different options open from there.