END_OF_DOCUMENT_TOKEN_TO_BE_REPLACED

Even if you buy the idea that gold's overbought, what else will you hold?

TEN YEARS AGO, everyone on the planet knew gold was a "Sell", writes Eric Fry in the Daily Reckoning.

(Incidentally, everyone also knew that JDS Uniphase and Pets.com were "Buys...")

Investors scorned gold. Central bankers sold it. Economists eulogized it. Today, gold is hated less...which causes some gold investors to worry that their favorite precious metal has become too popular for its own good. "Is the gold bull market about to hit a wall?" they ask themselves.

Your editors here at The Daily Reckoning have no answers – especially when money is at stake – but we do have guesses. In fact, we have a lot more guesses than money. And so we would guess that the gold bull market is far from over...very far.

But having said that, we would also guess that the risk of a sudden, steep correction is far from zero...very far.

In fact, an imminent correction seems like a plausible scenario.

"Yes, we extract less and less gold ore every year," our colleagues in the French office point out. "And yes, there have been very few large gold discoveries in recent years. Yes, demand for Gold Bullion is exploding; yes, central banks became net buyers of gold for the first time since the '80s; yes, Asian demand is booming; yes, gold benefits from the massive indebtedness of states, and the resulting increases in the money supply that destroys the value of paper assets and paper currencies... Yes, yes, yes...But something else strikes us. That everyone wants to own gold right now. 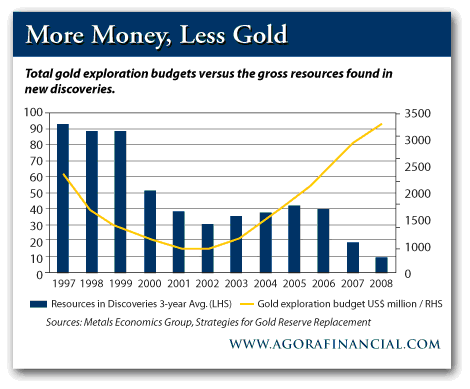 And it also worries us, dear reader. Gold is popular, finally, and we just can't stand it!

"Edgy" is not edgy anymore. The lunatic fringe has shifted to the middle of the bell curve. The financial counter-culture has become a pillar of the Establishment. This is not the world we knew in 1999, when we fell in love with $300 gold...and no one cared.

Between 1980 and 2000, the Yellow Dog did little more than gather fleas. Gold's value fell by more than half. During that same 20-year period, the S&P 500 delivered a dazzling return of more than 2,500%! Clearly, therefore, gold was a dead-beat, a good-for-nothing – more suitable for a Steinbeck novel than an investment portfolio. And like most losers, gold attracted other losers.

One of those gold-loving losers was The Daily Reckoning's very own Bill Bonner. As the new millennium dawned, Bill declared his "Trade of the Decade" – Buy Gold, sell stocks. The decade isn't over yet, but so far, so good. During the last nine years and 11 months, the S&P 500 has delivered a total return of -11%. The Gold Price has quadrupled.

No doubt about it, the ancient monetary metal is back in style, which worries Bill Bonner a little.

"Everyone seems to be jumping on the gold bandwagon," Bill laments. "Frankly, it's getting a little crowded...a little top-heavy. It's making us feel, well, a little uncomfortable.

"Here at the Daily Reckoning we never met a crowd we wanted to join...or a line we wanted to stand in. We don't even like being on the winning side of a football game – too much boisterous company.

"No, give us the lost cause, the diehard and the underdog," says Bill. "We are much more at ease as an outsider...an outcast...an outlier. Not only is there more elbow room, that's also where the bargains are – where others aren't looking. Trouble is, almost everyone is looking where we're looking now. At gold.

"Why? Because the story is so good. So easy to understand. So convincing.

"If the recovery is for real, demand will increase, diminishing inventories and turning the Fed's hot money into consumer price inflation. Investors will turn to gold to protect themselves. If the recovery falters, the feds will increase their stimulus efforts, setting the stage for even greater inflation later.

"If this analysis is correct, gold is a one-way bet. The argument is good," Bill concludes. "We believe it. But it bothers us that so many others do too."

Bill is not bothered to the point of wanting to actually SELL gold. After all, as he readily admits, 'the argument is good.' Nor is your California correspondent inclined to make a case for selling gold. Because here's the problem:

Once you've sold the stuff, what do you do next? Buy stocks? Buy bonds? Buy vintage Coca-cola bottles?

And while you're thinking about what you might buy, what do you hold in your bank account? A currency that's depreciating faster than net worth in a divorce court...?

So long-term gold holders are probably well advised to remain faithful to their favorite Dollar substitute, and just ride through the inevitable ups and downs. That said; short-term traders do not lack for reasons to risk betting against gold. For starters, the gold trade has become a bit crowded, as Bill correctly observes. Secondly, the recent rally has triggered "overbought" signals on all major technical indicators. Lastly, the recent rally is bumping up against the performance targets that have capped all the major gold rallies of the last ten years.

In the September 17, 2009 edition of the Rude Awakening (may it rest in peace), we presented the following table and observed:

"The shares of gold mining companies are flashing a compelling short-term buy signal. Since late July, the gold mining stocks, as represented by the HUI 'Gold Bugs' Index have jumped more than 30%, while the Gold Price has advanced only about one third as much.

"As the nearby table illustrates, rapid 30% rallies in the HUI tend to bode very well for the Gold Price. The five prior instances in which the HUI rallied more than 30% in a very short timeframe, the Gold Price subsequently jumped an average of 27%... 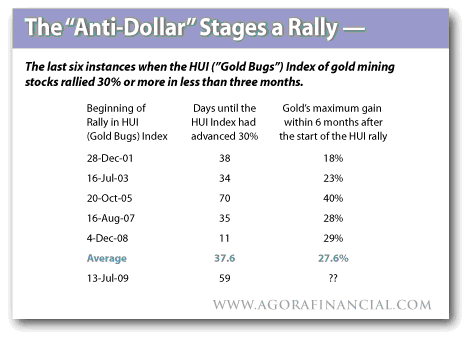 "A similar advance this time around would land gold at $1,160 an ounce by Christmas – or about $140 higher than today's price. No such rally is certain, of course. But the monetary stars seem to be aligning for both a short-term and a long-term advance in the gold market."

As it turns out, the stars aligned exactly as predicted and the Gold Price landed at $1,195 an ounce by Thanksgiving – a 30% jump from the mid-July lows. 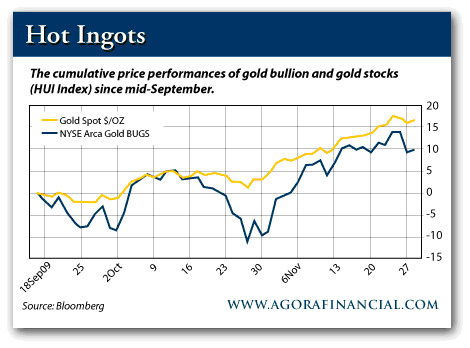 As a result, gold is making more headlines than the soon-to-be-filmed love scene between Angelina Jolie and Johnny Depp. In fact, gold just might be the sexier of these two news stories...and that's probably not a good thing.

The long-term outlook for gold remains as compelling as ever. This bull market is justified and "has legs." But the Yellow Dog has run very far, very fast over the last few months. The pooch might need a rest.

Want to Buy Gold at low cost with the utmost liquidity and security...? Go to BullionVault now...