END_OF_DOCUMENT_TOKEN_TO_BE_REPLACED

What Ben Bernanke told college students about the "inflation tax" known as seigniorage...

In one of these text books, Macroeconomics, the question of whether government budget deficits can lead to ongoing increases in the money supply is both asked and answered.

It appears that over the last few months, Mr. Bernanke has been putting these concepts into practice.

These reserve balances (also known as "vault cash") do not directly enter the general money supply. Instead, they comprise the reserve requirement of the banks under the fractional reserve banking system. 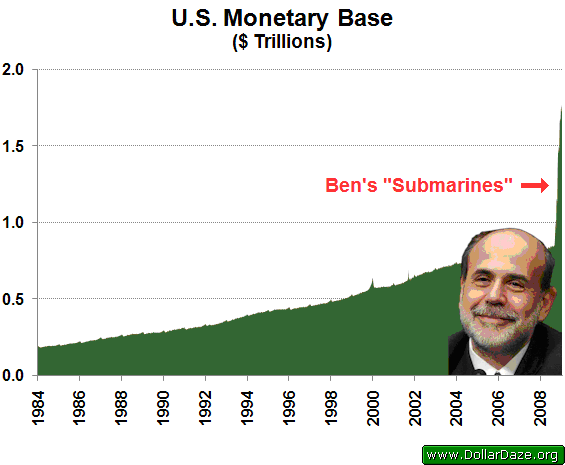 Seigniorage is the revenue derived from the face value of a currency net production costs. Thus if it costs four cents to produce a crisp new dollar bill, then the net revenue is 96 cents. Larger denominated bills are even more profitable!

Tapping this source of revenue isn't without consequence. Expansion of the money supply reduces the value of those notes already in circulation. Initially, this cost may be well hidden, especially when the country is enjoying a strengthening economy. But as the currency diminishes in value, larger and larger amounts are needed to support government expenditures.

The present-day hyperinflation of Zimbabwe is the latest example of a currency in the end stages of excessive seigniorage...otherwise known as the "inflation tax" that hits savers before destroying the economy.