END_OF_DOCUMENT_TOKEN_TO_BE_REPLACED

Or in fact it's misconception amid the Great Depression...

CHARLES RIST (1874-1955) was a deputy governor of the Bank of France, and said to be the one who reported Benjamin Strong's "coup de whiskey" comment made at the conference of central bankers in 1927, writes Nathan Lewis at New World Economics.

Born in Lausanne, Switzerland and studied law at Paris, Charles Rist was a close collaborator of Charles Gide, whom he eventually succeeded in the chair at Montpellier in 1906 and editor of the Revue d'economie politique.  Rist was an advisor to the post-WWI socialist governments and served as a sub-governor in the Banque de France and as an advisor to foreign central banks.

Rist's early economics was much influenced by the Lausanne School.  In the 1930s, he was vigorously opposed to the  Keynesian Revolution and did much to resist its advance into France.  He regarded the Great Depression as a mere result of monetary disorders and argued strongly for a restoration of gold convertibility.

Related to my investigations of various ideas surrounding the Great Depression, I've been exploring some of the ideas of writers from before 1970 or so. I was rather surprised to find that the ideas in this book – in particular, its introduction by Philip Cortney, the translator of the 1961 English edition, and also apparently a friend of Rist – seems to have served as the model for the "Mundell-Johnson hypothesis" which I looked at here.

This is from the introduction by Cortney:

"The reason why the 1929 depression was so deep and prolonged remains a mystery to most people, instructed or not. Essentially it was due to the fact that the governments of the United States and of Great Britain failed to recognize that the huge paper money inflation during World War I and the concomitant rise of prices made impossible the maintenance of the pre-war relationship between gold and paper currencies.

"Germany returned to the gold standard in 1924 and Great Britain in 1925. Both tied their currencies to the Dollar at the pre-war value in terms of gold. Until 1924, no central bank of any large European country was buying gold, with the result that gold was accumulated in the United States, and the illusion arose that Dollar prices (due to paper money inflation during the war) were gold prices.

"Most British economists hold the view, expressed again recently by Professor Triffin, that the severe fall in commodity prices after 1929 and particularly after 1931, was due to a 'shortage of gold'. The fault lay, according to Professor Rist, and I share his opinion, in governments not recognizing the fact that inflated monetary means and prices had made the international liquidity in gold inadequate, and had hampered the expansion of production of gold, at the level of prices inherited from the war. A readjustment of the price of gold in terms of the Dollar and the pound should have been made in 1924-25 to bring the purchasing power of gold nearer what it would have been if the rise in prices had been due to an increase in the production of gold and not to monetized government debt. Such a readjustment would have put an end to the presumed 'shortage of gold'."

Mudell's comments in 1999 were almost a verbatim rendition of these ideas.

Rist was among those, including his former co-worker Rueff, who suggested that the Dollar be devalued to $70 per ounce – a rather odd notion for a "gold standard advocate".

The idea seems to have revolved around the notion that "prices" had risen considerably since the devaluation of the Dollar in 1933, and thus represented a radically "inflated" state. They imagined that if a proper sort of gold standard system were imposed, prices would have to fall back to 1933 or 1940 levels, a decline of about 50%, with an accompanying severe recession. They thought that the "gold markets" of the time, which were indeed heavily influenced by government cooperation and excluded many in the developed countries (including the US) who could not own gold, were basically fictional.

"If we decided to put an end to inflation, the disequilibrium between the general price level and the gold valuation of the world's key currencies, at $35 an ounce, plus a low production of gold (due to its relatively low price), while the production of goods of all sorts is expanding, would exert a downward pull on prices and bring about a recession or depression and unemployment...

"The price of gold will have to be increased to a minimum of $70 and ounce if we are to avoid a fall in prices and/or a recession or depression."

I don't agree with this at all. There was some deviation of the Dollar from its gold parity, but it was not very large – perhaps $38 per ounce compared to $35 per ounce.

It seems to me that if the "gold price" was a complete fiction, then central banks should not have had any trouble maintaining their fictional "gold parities" at all, and all of the difficulties of Bretton Woods surrounding the "balance of payments" and the outflow of gold from the Federal Reserve should not have existed.

These ideas had a number of sources. They were heavily influenced by various quantitative notions, assuming that the large increase in the monetary base (of most countries) duing World War I or World War II implied a comparable decline in currency value. This is not necessarily the case at all.

The idea that governments could return to a gold standard at a prewar parity, with a monetary base perhaps double or triple the size that it was before the war, bothered them intensely, but doesn't bother me at all. For one thing, I think that monetary demand tend to increase during a war and soon after, because – in a perceived high-risk environment – people might like to hold currency instead of bank deposits, and banks might like to hold large reserves as a percentage of total assets.

Then, after the war, as people grow more confident of the stability of the economy and banking system, they tend to reduce their demand for banknotes while banks reduce their demand for reserves. The monetary base might be rather flat even while nominal GDP and banks' balance sheets expand. This is what seemed to happen both in the 1920s and the 1950s.

An expanding economy generally tends to have an increasing need for money, which a gold standard system automatically accommodates. 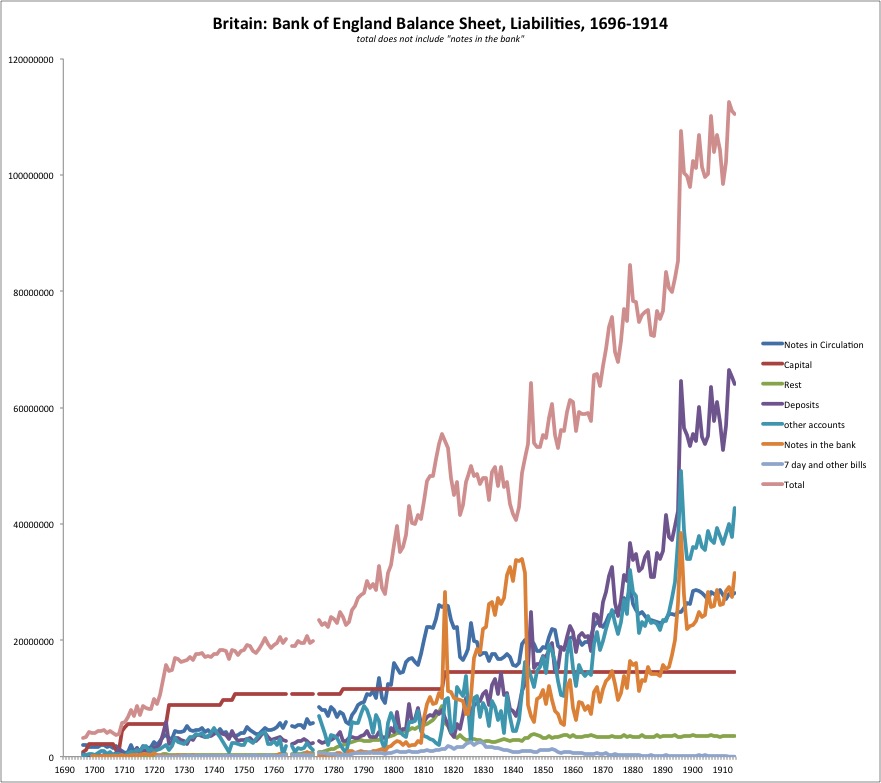 Second, various "price levels" do not necessarily indicate anything regarding the value of gold, or currencies. Sometimes higher prices are just...higher prices, in a currency of stable value.

During the 1950s and 1960s, there seems to be a new form of confusion, because around this time price indices which were based on commodity prices were replaced by "consumer price indices" that included a broad range of products.

Also, as a country becomes wealthier, the things that "consumers" spend their money on naturally migrate from commodity-like things toward services and manufactured products, which have far less price volatility.

Even today, the CPI of a developing country like Indonesia tends to be much more commodity-heavy, simply because the average family spends more of its income on basic foodstuffs and fuel than does a family in Germany or Japan. This makes the CPI more volatile, and more reflective of commodity prices.

Within these more reent CPI constructs, there is a general tendency to rise during times of economic expansion, independent of monetary values. This basically reflects rising incomes, due to higher productivity. When a CPI includes a lot of services, and the people who provide those services are paid more, then the price of the service tends to rise. Doctors and restaurants costs more in the US than in Chile, and more in Manhattan than in Buffalo.

Construction costs and land values, which translate into rents, also reflect incomes. At the same time, the price of manufactured goods tends to decline; but, in part as a consequence of this decline, people spend less of their income on manufactured goods, which means that this factor has a shrinking influence on the overall CPI.

To illustrate what I mean, let's look at the official CPI in both Japan and the US, 1955-1970. Japan returned to a gold standard in 1949, and maintained it until 1971. So, both the Yen and the Dollar were linked to gold.

We can see a substantial divergence, particularly after 1960 when the Japanese CPI soars. Now, if you assume that gold's value is identical to its "purchasing power" (ie, the CPI) then are we to say that the "value of gold" was different in Japan than it was in the US?

Obviously not. Prices were different, that's all. Japan's higher growth rate led to higher wages and a greater rise in prices. 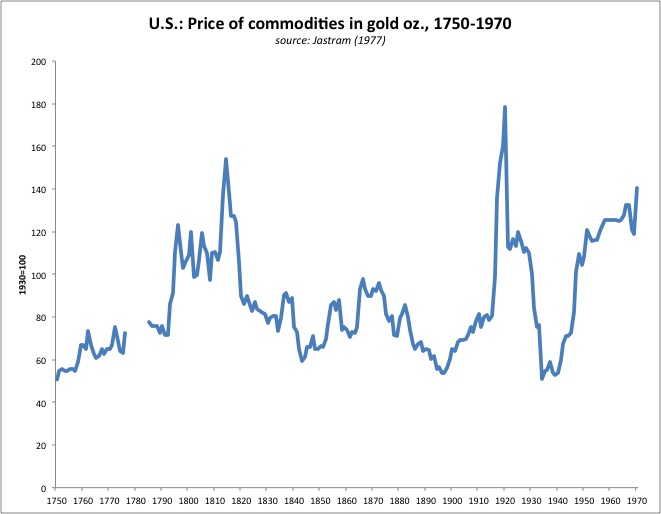 From this, we can see that commodity prices vs. gold were definitely on the high side after WWII, but comparable to where they were after WWI. Actually, I would like to eventually look into this more closely. I think Jastram used the BLS Wholesale Price Index here, which is not necessarily reflective of raw commodity prices and might misrepresent things. But it gives a basic idea. 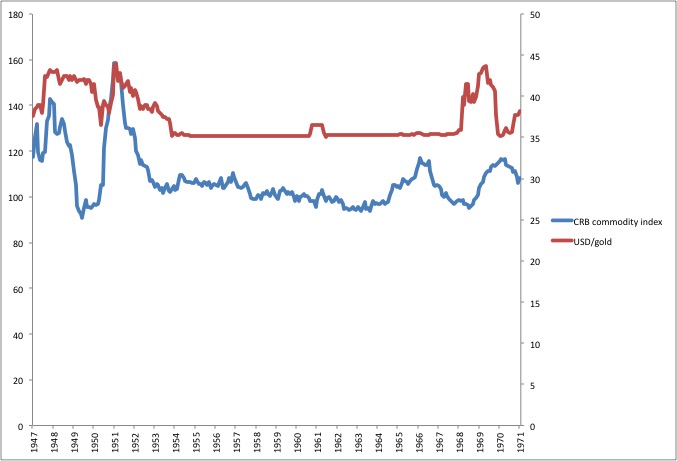 Here is a raw commodities index, the CRB Index. We can see that it was basically dead flat during the 1950s and 1960s, with some turmoil before 1953 caused by both variation in the Dollar's value vs. gold (red line), and also the turmoil of the time including the communist revolution in China in 1949 and the Korean War in 1950-1953.

Now, from the commodities index, we see no apparent change in gold's value at all during 1950-1970. But the Japanese CPI nearly doubled. It should be clear that the "value" of gold and its "purchasing power" as compared to some CPI index, or even a commodity index, are not at all the same.

Sometimes prices go up and down – as compared to a standard of stable value, such as gold. Many of the problems in Rist and later, Mundell and Johnson, derive from this basic error.