END_OF_DOCUMENT_TOKEN_TO_BE_REPLACED

Really is a dream after all...

Millions of Americans may have to delay retirement for years – if not permanently.

Like a squirrel facing a long winter with a lean stash of acorns...80% of American workers have under one year's salary salted away for retirement.

This we learn from a new report issuing from the National Institute on Retirement Security.

We are further informed that over 100 million working-age Americans own no retirement accounts whatsoever – including 401(k)s, individual accounts or pensions.

77% of Americans fall woefully behind "even the most conservative retirement savings targets for their age."

Summarizing the dismal business is Diane Oakley, the report's author and Cassandra:

"The facts and data are clear. Retirement is in peril for most working-class Americans. When all working individuals are considered – not just the minority with retirement accounts – the typical working American has zero, zilch, nothing saved for retirement."

Thus for millions a "middle-class nightmare" is fast displacing the American dream:

"The American dream of a modest retirement after a lifetime of work now is a middle-class nightmare. Even among workers who have accumulated savings in retirement accounts, the typical worker had a low account balance of $40,000. This is far off track from the savings levels Americans need if they hope to sustain their standard of living in retirement."

How has American retirement come to such a sad pass?

We grope for clues, hoping to stub our toe upon some accidental truth...

We stumble at once upon a lead...

It takes us to the mid-1970s, after Richard Nixon scissored the Dollar's final tether to gold.

The gold standard, neutered though it was in its dying days, nonetheless kept the balance of trade in a range.

The ersatz Dollar removed all checks.

America no longer had to produce in exchange for goods...or worry about losing its gold.

"By the sweat of your brow you will eat," Genesis tells us.

But under the new Dollar standard, America could eat by the sweat of others' brows...without spilling a drop of its own.

Scraps of paper, rolling off an overworked printing press, were its primary production.

Ream upon ream went abroad in exchange for real goods.

The international division of labor was opened to hundreds of millions, particularly peasants from the labor-rich fields of China.

They entered the factories in their millions, each toiling for a Dollar or two a day.

Overall US productivity has increased 77% since 1973, the Bureau of Labor Statistics informs us.

But average real hourly pay (adjusted for inflation) has only increased 12.4% over 45 years – 45 years!

Thus we find the average American worker a hamster upon a wheel...running mostly in place: 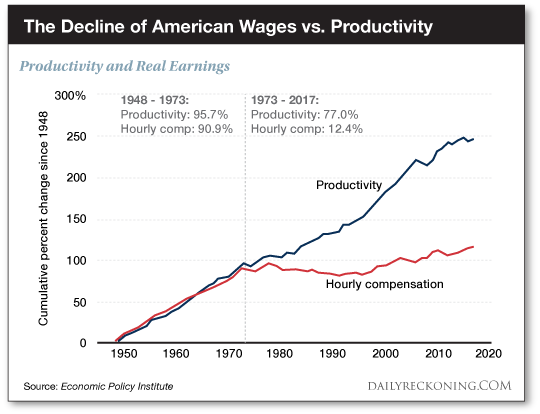 The past decade has only deepened existing trends...

The trickle-down theory argues you must first feed the horses in order to feed the sparrows.

It certainly has its points – poor men do not open businesses or provide employment.

But because of the massive distortions in today's economy...the sparrows have largely gone without.

The Federal Reserve's phony fireworks have pushed the stock market to record heights. The rising market has left the asset-owning classes in easy waters.

As our own Charles Hugh Smith reports, those earning $1 million or more have captured 63% of all capital gains.

But the Main Street economy has pegged along at a lilting 2.1% annual pace.

Does that not explain how Donald Trump came to occupy his current address?

We fear the president will fall short of the glory.

But if the great middle class keeps slipping down the greasy pole...

That retirement dreams of millions will slip away forever.