END_OF_DOCUMENT_TOKEN_TO_BE_REPLACED

The MORE times a level is tested, the weaker it becomes and the more likely it is to break, writes Jordan Roy-Byrne at TheDailyGold.

Once again, Gold has rallied up to the wall of resistance in the $1350 to $1375 region. Gold has previously tested that wall a handful of times but failed to break through.

This time, gold is in position to punch through and I will explain why.

First, we can allude to what we already wrote. The more times a level is tested, the more likely it is to break. By virtue of testing resistance again, gold is already in a better position.

Second, the fundamentals are moving into place.

Specifically, market-based indicators of real interest rates (the fundamental driver for gold) are falling in anticipation of Fed easing, which is nearly a given at this point.

Over the past year, we've noted that in 11 of the 13 rate-cut cycles since 1955, gold stocks have averaged a 172% gain from the bottom (usually a few months before) around the first rate cut.

In short, the start of a rate cut cycle is usually very bullish for precious metals. This was not in place in 2017 or 2018 but should be for the second half of 2019.

Third, gold is in position to break resistance while the US Dollar technically remains in an uptrend but in a weak state. At present, the Dollar is not oversold nor does it appear likely to blast higher.

In the summer of 2016, the Dollar had already put in a higher low while in late 2017 and early 2018, the Dollar broke to new lows but gold failed to break through.

If the greenback were to weaken and lose its 40-week moving average (which it has held for over a year), it should push gold past $1400 and potentially to $1500 per ounce. 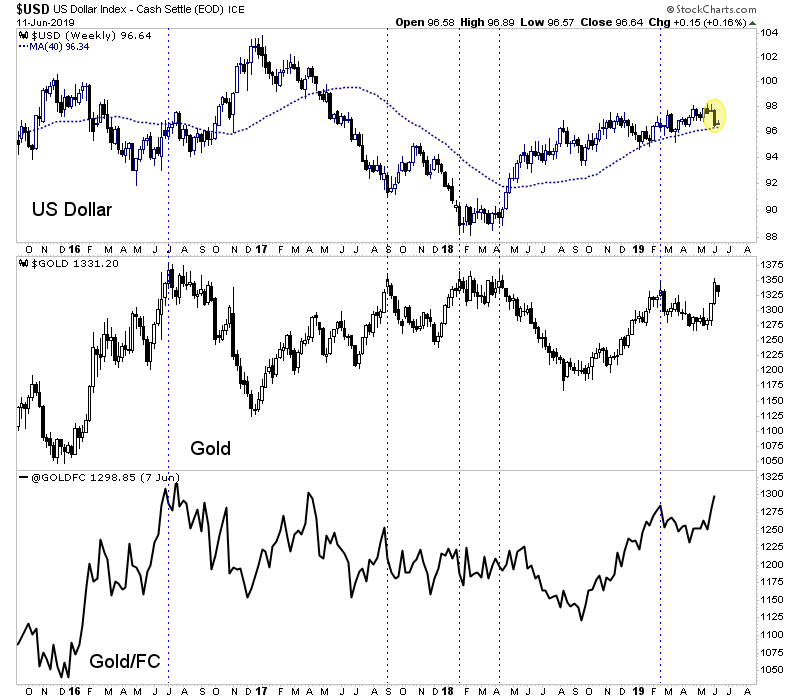 If the Fed follows through and we get multiple rate cuts before 2020, Gold should break the wall of the resistance. Couple that with a breakdown in the Dollar and Gold could reach $1500/oz or even higher.

We anticipate the gold stocks, junior gold stocks and Silver could explode higher once Gold breaks that wall of resistance. To learn which stocks we own and intend to buy that have 3x to 5x potential, consider learning more about our premium service.