END_OF_DOCUMENT_TOKEN_TO_BE_REPLACED

WE FURROW our brow against the latest inversion of the 'yield curve', writes Brian Maher at The Daily Reckoning.

Recession was the invariable consequence – a perfect 1,000% batter's average.

But an inverted yield curve is no immediate menace.

It may invert one year or more before uncaging its furies.

But today we revise our initial projections – as we account for the "adjusted" yield curve.

The "adjusted" yield curve indicates recession may be far closer to hand than we suggested yesterday.

When then might you expect the blow to land?

We must first recognize the contrast between the nominal and the real.

The world of appearance, that is...and the deeper reality within.

Real interest rates (the nominal rate minus inflation) do.

To arrive at the real interest rate...

Today's nominal rate is between 2.25% and 2.50%. Meantime, consumer price inflation (officially) goes at about 2%.

Thus we find that today's real interest rate lies somewhere between 0.25% and 0.50%.

After this fashion, the standard yield curve may differ substantially from the "adjusted" yield curve.

Differ how much exactly? Michael Wilson is chief investment officer for Morgan Stanley.

He has applied a similar treatment to distinguish the adjusted yield curve from the standard yield curve.

The standard yield curve – Wilson insists – does not take in enough territory.

The adjusted yield curve does.

The adjusted curve takes aboard the Federal Reserve's estimate that every $200 billion of QT equals an additional rate hike...for example.

The standard yield curve does not. 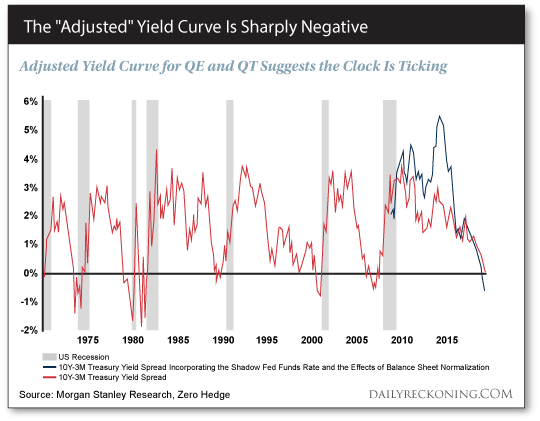 The dark-blue line represents the adjusted yield curve – that is, adjusted for QE and QT.

The adjusted yield curve rose steepest in 2013, when QE was in full roar.

But then it began a flattening process...

The Federal Reserve announced the end of quantitative easing in late 2014.

And Janet Yellen began jawboning rates higher with "forward guidance" – insinuating that higher rates were on the way in 2015.

Thus financial conditions began to bite...and the adjusted yield curve began to even out.

By the time QT was in full swing, the adjusted curve flattened drastically. The standard curve – which did not account for QT's constraining effects – failed to match its intensity.

"The adjusted curve shows record steepness in 2013 as the QE program peaked, which makes sense as it took record monetary support to get the economy going again after the great recession. The amount of flattening thereafter is commensurate with a significant amount of monetary tightening that is perhaps underappreciated by the average investor."

Now our tale acquires pace and – mercifully – its point.

After years of flattening out, the standard yield curve finally inverted in March 2019.

Prior to March, it last inverted since 2007 – when it presented an omen of crisis.

But since March, the standard curve bounced in and out of negative territory.

The recession warning it flashed was therefore dimmed and faint – until veering steeply negative this week.

But the adjusted yield curve did not invert in March...

It inverted last November – four months prior. And it has remained negative to this day.

"Adjusting the yield curve for QE and QT shows an inversion began at the end of last year and persisted ever since."

Thus it gives no false or fleeting alarm – as the standard March inversion may have represented.

We refer you once again to the above chart.

Note how deeply the adjusted yield curve runs beneath the standard curve.

But if the adjusted curve inverted last November...we are presented with a far more immediate menace.

Here Wilson sharpens the business to a painful point, sharp as any thorn:

"Economic risk is greater than most investors may think...The adjusted yield curve inverted last November and has remained in negative territory ever since, surpassing the minimum time required for a valid meaningful economic slowdown signal. It also suggests the 'shot clock' started six months ago, putting us 'in the zone' for a recession watch."

If recession commences 311 days after the curve inverts – on average – some 180 days have already lapsed.

And so the countdown calendar must be rolled forward.

If the present expansion can peg along until July, it will become the longest expansion on record.

But if the adjusted yield curve tells an accurate tale, celebration will be brief...