END_OF_DOCUMENT_TOKEN_TO_BE_REPLACED

The Fed's new 'quantitative tightening' spells big trouble for stocks...
INVESTORS don't know whether they were coming or going, writes Bill Bonner in his Diary of a Rogue Economist.
We don't know, either. But we rate the odds of "going" a lot higher than the odds of "coming".
As we see it, there are two possibilities...
What we've seen over the past two weeks or so is a correction in a continuing bull market in stocks. Or we are in the early stages of a major bear market.
Most likely, it will be interpreted both ways. Because we probably are at the beginning of a bear market. And also not too far away from another explosive move higher for stocks.
Why?
Because the authorities are not likely to let a bear market proceed in the normal way. Instead, as it intensifies, they are likely to intervene with such massive force (remember, this is war!) that it will send stocks flying, like the bumper of an automobile that has just hit a land mine.
Wall Street's shills in the mainstream press have been out in force explaining that in a pullback like this investors could expect to wait four months before the market has fully recovered.
We suspected that this phenomenon describes something other than the normal functioning of a healthy market. So we asked our research team to have a look.
There were two major corrections since 2009. In each case, stocks recovered all their losses within about four months.
But if you look carefully, you see that this was hardly a case of natural market forces at work. Instead, the fixers from the Fed were on the job.
In both instances, the Fed announced new liquidity programs near the bottom of the corrections. Stocks headed up again soon after.
Take a look at the chart. You'll see what was going on. 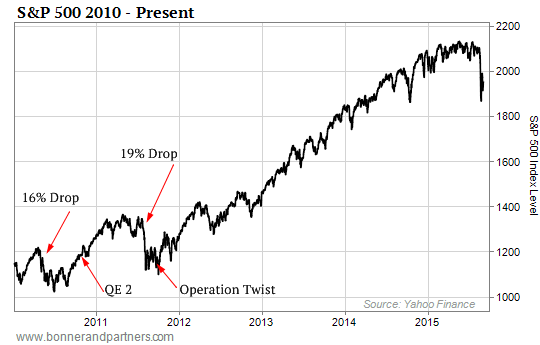 What this reveals is not a solid bull market, with periodic sell-offs, followed by a healthy revival of buying. Instead, it's a market so heavily rigged by the feds that it can only be kept aloft by huge doses of credit easing.
US Dollar liquidity is drying up. The Fed is no longer expanding its balance sheet by way of QE. And bank lending is too weak to drive significant economic growth.
But there is another important source of US Dollar liquidity: foreign nations recycling their Dollar foreign exchange reserves.
Here's our friend and economist Richard Duncan on how this works:

"The Fed was not the only central bank creating fiat money and buying Dollar assets last year.
"In order to prevent their currencies from appreciating, many central banks around the world created their own money and used it to buy the Dollars entering their economies as a result of their trade surpluses with the US.
"Once they had acquired the Dollars, they invested them in US Dollar assets to earn a return. This, then, was a second source of liquidity. It can be measured by the increase in foreign exchange reserves."

China – with its roughly $4 trillion in US Dollar reserves – was the biggest source of this kind of liquidity.
But here's Bloomberg, reporting on how falling foreign exchange reserves in China are now leading to what it describes as "Quantitative Tightening":

"2015 will mark the peak of reserve accumulation after two decades of growth with China in the vanguard as its new currency regime means it has to pare reserves to avoid a free fall in the Yuan.
"It has already reduced its holdings to $3.65 trillion from $3.99 trillion in 2014. 'This force is likely to be a persistent headwind towards developed market central banks' exit from unconventional policy in coming years, representing an additional source of uncertainty in the global economy,' said [George] Saravelos [head of European foreign exchange strategy at Deutsch Bank] and colleagues in a report to clients on Tuesday. 'The path to 'normalization' will likely remain slow and fraught with difficulty.'..."

All of this is just a warning. This is a rigged market. And the riggers are not rigging it as aggressively as they need to in order to keep prices going up.
In an honest stock market, you do not need the Fed to pump in liquidity so that corporations can take advantage of cheap credit to buy their own shares.
In an honest market, people invest their savings – carefully studying which stocks are likely to pay them the most reliable and/or most abundant dividends. They buy stocks in solid business, trusting management to fructify their investments with growth and income.
In an honest market, a 10% correction may be sufficient to set things right again.
But that is not what you see in the chart above. The feds have pushed this market out of line. Now, it is subject to a major reversal.