END_OF_DOCUMENT_TOKEN_TO_BE_REPLACED

Seen over two decades or more, the price of gold maps several key trends...
IN RECENT MONTHS, the price of gold has tumbled, writes Byron King in Bill Bonner's The Daily Reckoning.
Along the way, lower gold prices have undermined the share price of many mining plays. The yellow metal is selling for its approximate cost of production at many of the world's largest mines.
Yet for all the gloom and doom within the gold investment space, there are indications that physical gold is becoming scarce. In fact, gold may be setting up for an explosive rebound, both in its nominal price and in the value of companies that mine it.
The price of gold over the past year has fallen badly. We've endured a steady retreat from near $1800 per ounce to the mid-$1200s. Clearly, people are selling.
But look at the gold price chart for the past two decades and more. 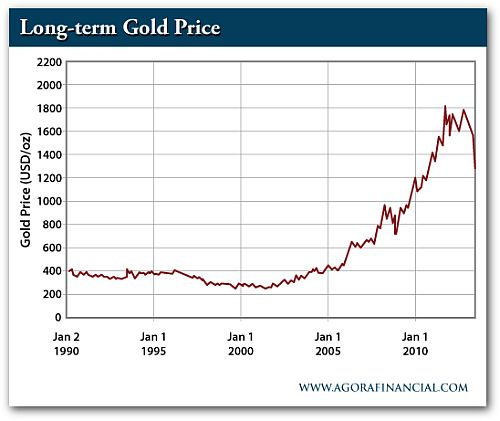 Gold had a decade or so in the doldrums in the 1990s. Then people started buying gold all through the first decade of the 2000s. Gold's recent price decline comes after a solid decade of strong, steady gains. That's what the chart indicates.
The back story to the rising price of gold in recent years is that investors and some central banks accumulated large holdings of gold. This helped drive the price of gold up. Every buyer has a reason, of course. (And every seller sells for a reason, too!)
For example, at national levels, Russia and China accumulated significant amounts of gold as state assets, along with a range of other nations from India to Vietnam to Saudi Arabia and more. Among other things, foreign powers – certainly Russia and China – want alternatives to the US Dollar as a means of storing wealth over the long haul.
Or look at a large fund like SPDR Gold Shares (GLD). This fund advertises gold holdings of more than 30 million ounces – over 930 tonnes – with a value near $40 billion. By comparison, the US Treasury claims that Fort Knox holds about 147 million ounces of gold. Thus, SPDR Gold is the equivalent of one-fifth of US national holdings at Fort Knox. We're talking about BIG numbers here.
Other sophisticated institutions added gold to their portfolio allocations during the past decade. In 2011, for example, the AAA-rated Northwestern Mutual Life Insurance Co. bought $400 million in gold. It was the first gold purchase in the 155-year history of the company.

"Gold just seems to make sense; it's a store of value," stated Northwestern's CEO at the time, Edward Zore. "In the Depression," he added, "gold did very, very well."

In Austin, the University of Texas Investment Management Fund put nearly $1 billion into gold in 2011, purchasing physical metal in New York. Again, the idea was to diversify the university's holdings, to preserve wealth over the long haul. Of interest, the U of T received a stiff-arm from any number of suppliers when it requested that gold actually be transferred from New York to a site in Texas.
Of course, across the world over the past decade, millions of individual investors bought gold coins, small ingots and large bars for vault storage. The idea was (and remains) to preserve wealth in an era of inflation.
These illustrations take us back to the earlier point, which is that for the past decade people bought gold. The price of gold went up. Now – at least in the short term – people are selling (even the Texas endowment fund sold some physical gold earlier this year, ahead of the market decline). But is gold selling a short-term issue or a harbinger of something else occurring over the long term?
Let's step back and ask how much of the world's wealth is tied up in gold. According to figures compiled by German economist Ronald Stoeferle, the cumulative value of all global financial assets amounted to about $223 trillion at the end of 2012.
Of that very big number – nearly 14 times total US gross domestic product – the share of 'investable gold' currently totals $1.1 trillion, or a mere 0.5% of cumulative global assets. Here's a graph to illustrate the point. 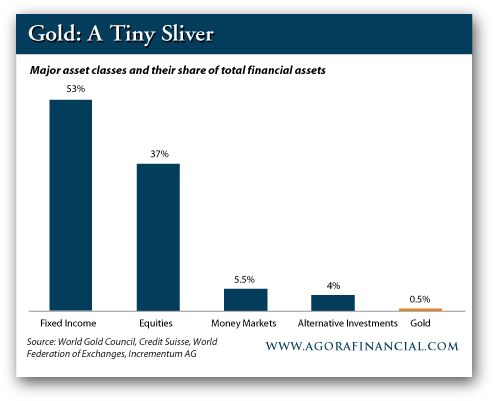 In other words, for all the gold that's out there – in national vaults, funds, insurance companies, with institutions, sitting in people's safe-deposit boxes – it's just a tiny fraction of the cumulative value of other financial assets across the world.
Herr Stoeferle's figures are even more remarkable when you compare the percentage of gold holdings today (0.5%, see above) with what they were back in 1981, when gold made up about 26% of global assets. Or go further back to 1948, just after World War II, when gold comprised 30% of total global financial assets.
The point is that if gold ever reverts to anything even close to its past significance as a fraction of the world's total financial assets, the upside could be a skyrocket rise in price.
According to Herr Stoeferle:

"The notable characteristics of gold – as a global currency with a long-term track record, no credit or counterparty risk, highly liquid and globally traded, very little inflation through mine production – are especially desirable in the current environment."