END_OF_DOCUMENT_TOKEN_TO_BE_REPLACED

Price controls fix inflation no better than raising tax rates grows the tax base...
IT EMERGED last week that the average asking price for a property in the UK had risen above £250,000, writes Tim Price at ThePriceOfEverything, republished by the Cobden Centre.
Superficially this sounds like good news for home-owners. In reality, the only benefit goes to government, which enjoys a higher tax take from stamp duty at 3% as opposed to the 1% rate that applies to property purchases below the £250,000 level – assuming people can be coerced into wanting to move.
Unless home-owners are down-sizing, they merely have to pay more for the houses into which they move. And higher house prices make life just that little bit more miserable for a younger generation already plagued by the rising cost of education, the likely burden of student debt, and an increasingly competitive jobs market.
Anyone trying to join the long-standing cult that is British property ownership has reason to be wary of the government's latest attempt to inflate the property bubble by encouraging reckless credit provision via the 5% deposit 'help to buy' scheme. It's almost as if the financial-crisis-triggered-by-a-bursting-property-bubble never happened.
As Schuettinger and Butler point out in their history of wage and price controls, government- provoked inflation is nothing new. Nor are the proposed solutions, as they explain in Forty centuries of wage and price controls: how not to fight inflation (The Heritage Foundation, 1979):

"The co-authors began working on this book in 1974, just after the termination of President Nixon's controls in the United States. Since that time, we have examined over one hundred cases of wage and price controls in thirty different nations from 2000 BC to AD 1978.
"We have concluded that, while there have been some cases in which controls have at least apparently curtailed the effects of inflation for a short time, they have always failed in the long run. The basic reason for this is that they have not addressed the real cause of inflation which is an increase in the money supply over and above the increase in productivity. Rulers from the earliest times sought to solve their financial problems by debasing the coinage or issuing almost worthless coins at high face values; through modern technology the governments of recent centuries have had printing presses at their disposal. When these measures resulted in inflation, the same rulers then turned to wage and price controls."

The Roman Emperor Nero (AD 54-68) responded to growing economic problems by devaluing the currency. The devaluation started relatively modestly but accelerated under Marcus Aurelius (AD 161-180) when the weights of coins were reduced. "These manipulations were the probable cause of a rise in prices," wrote Levy. The Emperor Commodus (AD 180-192) turned to price controls and decreed a series of maximum prices, but things deteriorated and the rise in prices became "headlong" under the Emperor Caracalla (AD 211-217).
Egypt was the imperial province most severely affected. During the fourth century, the value of the gold solidus changed from 4,000 to 180 million Egyptian drachmai. Levy also attributes the grotesque rise in prices which followed to the increase of the amount of money in circulation. The price of the same measure of wheat in Egypt rose from 6 drachmai in the first century to 200 in the third century; in AD 314, the price rose to 9,000 drachmai and in AD 334 to 78,000. Shortly after AD 344 the price had reached more than 2 million drachmai. Other provinces endured similar inflations.
Levy wrote:

"In monetary affairs, ineffectual regulations were decreed to combat [Gresham's Law, that bad money drives out good] and domestic speculation in the different kinds of money. It was forbidden to buy or sell coins: they had to be used for payment only. It was even forbidden to hoard them ! It was forbidden to melt them down (to extract the small amount of silver alloyed with the bronze). The punishment for all these offences was death. Controls were set up along roads and at ports, where the police searched traders and travellers. Of course, all these efforts were to no purpose."

Perhaps the most notorious attempt to control wages and prices took place under the Emperor Diocletian. Commodity prices and wages reached "unprecedented heights" shortly after he assumed the throne in AD 284. The Empire's economic troubles have been attributed to a vast increase in the armed forces (to repel invasions by barbarian tribes); to a huge building programme of questionable value; to the consequent raising of taxes and the employment of ever more government officials; and to the use of forced labour to accomplish much of Diocletian's public works programme. (Thank goodness the current UK government isn't intent on squandering over £40 billion it doesn't actually have on a high speed rail link of dubious utility.)
Diocletian, on the other hand, attributed the inflation entirely to the "avarice" of merchants and speculators. Some things truly never change.
What is undeniable is that as taxes rose, the tax base shrank, and it became increasingly difficult to collect taxes, resulting in a vicious circle. (Happily, the Liberal Democrats in coalition with the current government have a progressive attitude towards soaking the rich.)
Probably the single biggest cause of Diocletian's inflation was his debasement of the coinage. In the early Empire, the standard Roman coin was the silver denarius. Its value had gradually been reduced in the years leading up to his reign as emperors issued tin-plated copper coins which still kept the name "denarius". Under Gresham's Law, silver and gold coins were hoarded and left circulation.
During the 50 years ending in AD 268, the silver content of the denarius fell to one five- thousandth of its original level. Trade was reduced to barter and economic activity stagnated. The middle class was almost obliterated. To overcome the baleful influence of his bureaucracy, Diocletian introduced a system of taxes based on payments in kind, which had the effect of destroying the freedom of the lower classes and tying them to the land. Then came currency reform, and the Edict on prices and wages. Historian Roland Kent:

"Diocletian took the bull by the horns and issued a new denarius which was frankly of copper and made no pretence of being anything else; in doing this he established a new standard of value. The effect of this on prices needs no explanation; there was a readjustment upward, and very much upward."

Diocletian had the option of either inflating – minting increasingly worthless denarii, or to deflate – in the form of cutting government expenditures. He chose to inflate. He also chose to fix the prices of goods and services and suspend the freedom of the people to decide what the currency was actually worth. He fixed the maximum prices at which beef, grain, eggs and clothing could be sold, and the wages that workers could receive, and prescribed the death penalty for anyone who disposed of his wares at a higher figure.
Less than four years after the currency reform associated with the Edict, the price of gold in terms of the denarius had risen by 250%. By AD 305 the process of currency debasement began again. Levy:

"State intervention and a crushing fiscal policy made the whole empire groan under the yoke; more than once, both poor men and rich prayed that the barbarians would deliver them from it. In AD 378, the Balkan miners went over en masse to the Visigoth invaders, and just prior to AD 500 the priest Salvian expressed the universal resignation to barbarian domination."

David Meiselman, in a foreword to Forty centuries... writes as follows:

"What, then, have price controls achieved in the recurrent struggle to restrain inflation and overcome shortages ? The historical record is a grimly uniform sequence of repeated failure. Indeed, there is not a single episode where price controls have worked to stop inflation or cure shortages. Instead of curbing inflation, price controls add other complications to the inflation disease, such as black markets and shortages that reflect the waste and misallocation of resources caused by the price controls themselves. Instead of eliminating shortages, price controls cause or worsen shortages. By giving producers and consumers the wrong signals because 'low' prices to producers limit supply and 'low' prices to consumers stimulate demand, price controls widen the gap between supply and demand.
"Despite the clear lessons of history, many governments and public officials still hold the erroneous belief that price controls can and do control inflation. They thereby pursue monetary and fiscal policies that cause inflation, convinced that the inevitable cannot happen.
"When the inevitable does happen, public policy fails and hopes are dashed. Blunders mount, and faith in governments and government officials whose policies caused the mess declines. Political and economic freedoms are impaired and general civility suffers."

The chart below, courtesy of Church House, shows the history of the most important price in the UK economy – the price of money, as set by the central bank (as opposed to the market):

The chart below, courtesy of the St Louis Federal Reserve and Incrementum AG, shows the expansion of the US monetary base since 1918; the three separate iterations of QE are marked: 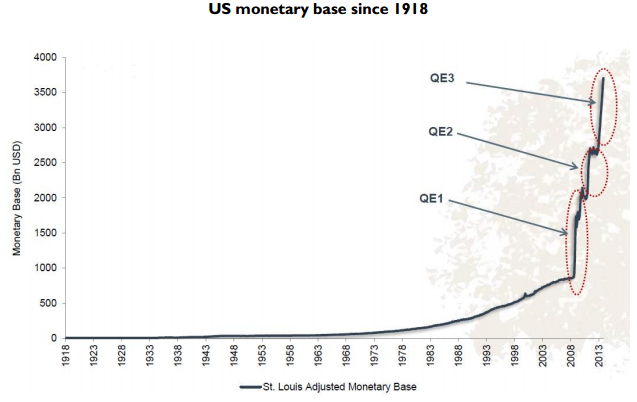 Some thoughts:
We hold gold.