END_OF_DOCUMENT_TOKEN_TO_BE_REPLACED

Gold gained almost 9% while silver gained 14%. The miners (GDX and GDXJ) gained the same amounts (9% and 14%) but unlike the metals – which closed near their highs of the quarter – ended up losing more than half their earlier gains.

Despite a strong quarter, the entire complex remains below the February highs and 200-day moving average (ex-silver) just days after the US Dollar index rebounded strongly from its own 200-day moving average. So as the second quarter begins, the warning signs for precious metals are mounting.

It is never a good sign when gold is the strongest part of the sector and especially while the sector trades below key moving averages. While silver rests above its 200-day moving average and has recently outperformed gold on a percentage basis, unlike gold it has yet to reach its late February highs around $18.50.

So in that respect silver has lagged gold. 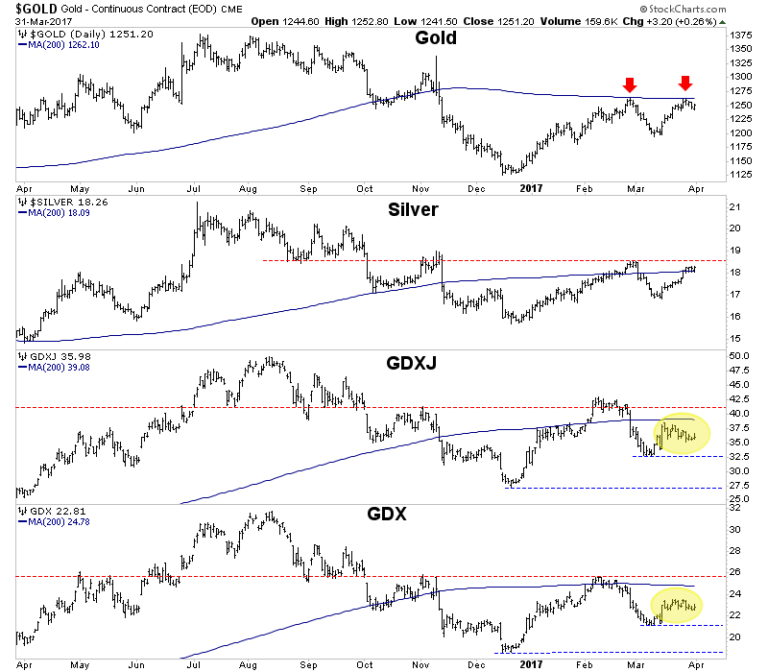 Gold is the strongest part of the sector but we see evidence it could weaken during the start of the second quarter.

Gold has already failed twice at its 200-day moving average and now it must contend with a rebound in the US Dollar Index.

Last week the greenback enjoyed a strong rebound off its rising 200-day moving average. Furthermore, note that since December the greenback retraced only 38% of its advance from 92 to nearly 104. The strongest trends will retrace usually 38% or 50% of previous gains.

Finally, while gold against foreign currencies (Gold/FC) is quite strong from a bird's eye view, it is currently showing a negative divergence to gold in Dollar terms, as it is below its late February high. If gold/FC is weaker than gold-in-Dollars it means that gold is more vulnerable than usual to a rising greenback. 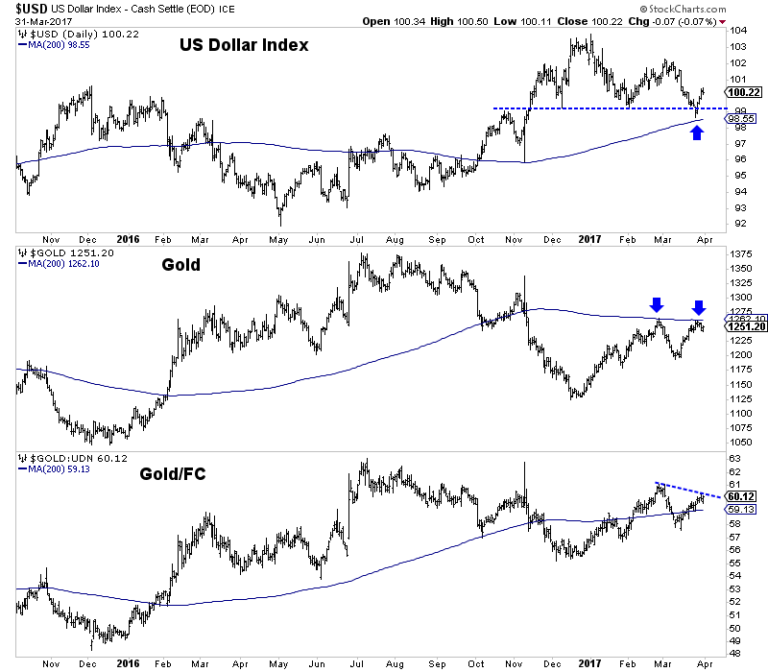 As the second quarter begins, there are critical warning signs for precious metals.

The miners typically lead the metals and their recent failure to return to their 200-day moving averages and February highs is a bad omen for the metals. In addition, last week we covered the GDX advance decline line which is so weak it couldn't even come close to its 50-day moving average.

Meanwhile, the US Dollar's strong rebound off its 200-day moving average will provide additional resistance to gold. Given that gold is currently the strongest part of the sector, that is not good for the entire sector.

We expected 2017 to be a grind. Be patient and if precious metals turn lower, wait to buy bargains amid oversold conditions.