END_OF_DOCUMENT_TOKEN_TO_BE_REPLACED

How population – and the US Fed – helped spark unrest and revolution across the Middle East...

SO MIGHT Ben Bernanke go down in history as the Simon Bolivar of the Middle East? asks Dan Denning in St.Kilda in his Daily Reckoning Australia.

Doubt it. Ben Bernanke is a central banker in a rumpled suit. Bolivar was a revolutionary who led much of Latin American to overthrow the Spanish Empire. One cuts a dashing figure through history. The other is a career academic.

But as the architect of today's weak, beaten-down US Dollar, Ben Bernanke has become the poster boy for unintended consequences. The end of the global Dollar Standard, in which American money is the undisputed reserve currency, has destabilised things that were quite stable for many years. Like food prices. And oil prices. And autocratic regimes in the Middle East...many of whom were also backed with US weapons. 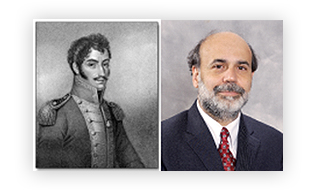 Libya now joins Tunisia, Egypt, Algeria, Bahrain, Yemen and Iran as the latest nation state to see its legitimacy challenged by millions of unhappy, mostly young, men and women. Of course in each particular country there are political factors unique to that country, which have caused or contributed to the popular revolution. It would be trite to chalk it all up to Helicopter Ben.

But we'd suggest that when history looks back, one of the trigger events for the toppling of multi-decade petro-dictators will be the toppling of the multi-decade petro-Dollar Standard. At the geopolitical level, the weak Dollar and low interest rates have driven investors into commodities (some of it speculation).The resulting inflationary bubbles are now having real-world consequences.

This is the crying shame of bubbles. At the household level, bubbles bankrupt families. Low interest rates on cash incentivises households to join the speculative rabble. People buy tech stocks with no earnings. Or houses that are already far too expensive for the average income. Real household wealth is destroyed in inflationary bubbles because people miscalculate risk and chase asset price growth.

But let's get back to North Africa and the Middle East, where two more points stand out. The first is a demographic point. You've seen in the past that demographics are working against Western Welfare Entitlement States. They have ageing populations that are consuming more and more government services. Meanwhile, the tax base is crumbling and debt is (for now) growing to bridge the divide between tax revenues and what the Welfare State owes to the people it's bribed.

But down Libya way, the demographic problem is different. The population pyramids are fat at the bottom and thin at the top. This means these countries have huge young populations. Many of those people have no jobs and no real economic prospects. This is fuel to the revolutionary fire.

Take a look at these population pyramids... 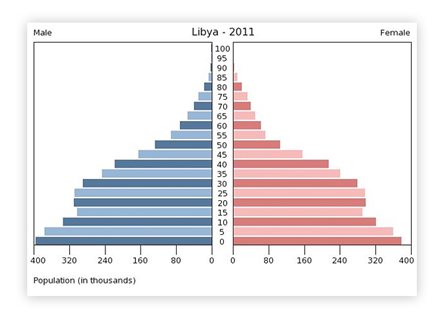 With a population of 6.5 million, Libya is a small country, but with a lot of young people. But wait! That shouldn't be a problem, right? Libya, Algeria (34m) and Iran (78m) are the third, ninth, and twelfth largest exporters of crude oil in the world, respectively. 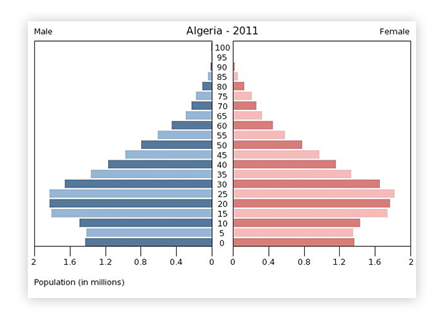 All these figures, by the way, are taken from the US Census Bureau. And these young people should be generating plenty of oil money to build a rich, prosperous, fair, just and well-fed society. So why aren't they? 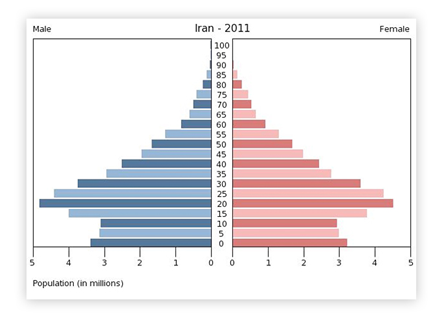 Well, as you might know, just because you have a land mass rich in resources doesn't make you wealthy. In fact, there's plenty of academic research to suggest that countries with great natural resources tend to grow more slowly than resource-poor countries. It's called the "resource curse" or "Dutch disease".

Are resource-rich countries just economically and intellectually lazy? You've got it all in the ground. You don't have to work for it, save, invest, grow your capital base, and produce real goods. That kind of geological windfall might breed certain insolence to the fundamental laws of the free market. In other worlds, your resource wealth blinds you to the hard work of actually making a living.

It's not at all ironic that Hong Kong and Singapore became so rich even though they had so little resource wealth. They traded, produced, and invested. Low taxes, the rule of law, light regulation, and free trade have made both countries incredibly wealthy.

It's probably worth thinking about the resource curse when you're carving up BHP Billiton's $10 billion half-year profit in your mind (if you're Aussie prime minister Julia Gillard). BHP went and found those resources. It paid leases for them. It employed people to define them, to mine them, and extract them. It took capital, labour, and the enterprise of a great Australian firm. And we want to punish that?

Interestingly enough, a discussion paper published by the Reserve Bank of Australia a few years ago showed how resource wealth can lead to really bad policy making. One critical issue was whether the government thought the increase in the terms of trade from a commodity boom was temporary or cyclical. If it's a permanent increase in the terms of trade, the government can anticipate higher corporate tax revenues and royalty revenues from commodity producers...forever. If it's cyclical, then government spending shouldn't factor in ever-rising resource prices. From the article:

The resource curse argues that when there is a natural resource revenue windfall either because of a discovery or a rapid rise in prices, this serves to undermine a country's governance structure. Politicians have the incentive to use the windfall to maintain power by effectively buying votes or empowering their supporters so that they can eventually divert some of the windfall to themselves.6 Hence, rather than smooth the consumption of this windfall by saving a portion of it, their incentive is to spend it immediately upon receipt.

Gee. That sounds familiar. A rapid rise in resource prices leads to a windfall profits tax that amounts to a wealth transfer to favoured political friends and institutions. What could possibly go wrong?

Well, China could catch a little of whatever is going around in the Middle East. UK papers are reporting that Chinese workers are being encouraged to rally and shout, "We want food, we want work, we want housing, we want fairness!" Someone has dubbed it the Jasmine Revolution, although it's a bit early to expect that a popular revolution is going to get any traction in the Chinese police state.

Again, inflation could be the culprit in China, just as it has been elsewhere. The "currency quake" is rumbling all over the world. While we were away from The Daily Reckoning's HQ down under last week, we learned that China again raised reserve requirements at banks in a bid to cool lending and slow down house price inflation. The government also raised local fuel prices to keep up with rising global crude prices.

Milton Friedman once said that inflation is, "always and everywhere a monetary phenomenon." But it is everywhere fast becoming a geopolitical one too.