END_OF_DOCUMENT_TOKEN_TO_BE_REPLACED

Hydrogen fuel-cell demand yet to hit supply & demand data...
IMPORTS of platinum to China are helping offset the impact on prices of a record surplus of supply over demand in 2021 according to new data and analysis.
Platinum mining supply will outstrip global end-use demand, net of recycling flows, by more than 14% in 2021 says the latest estimate published by the World Platinum Investment Council.
That excess – a record 24 tonnes against mine output of 191 – marks the largest percentage surplus since 1980's all-time 19.5% excess of mining supply versus net demand for the industrially and technologically useful precious metal.
Platinum imports into China have however "run well ahead" of the world No.2 economy's domestic demand for platinum, the Council's latest report goes on, "potentially absorbing much of the excess metal supply and resulting in reduced metal availability in the market." 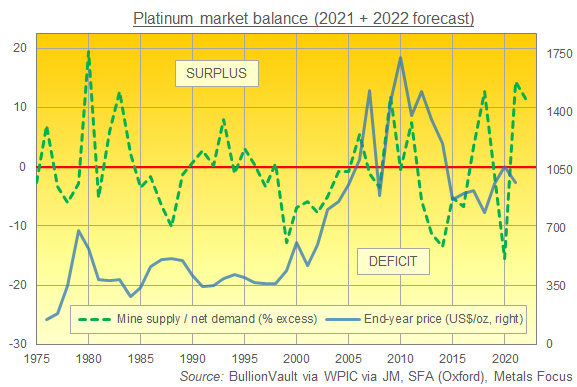 Platinum mining supply has leapt in the second-half of 2021 so far, outpacing the July-to-September period of last year by 7% as Covid restrictions eased and producers took advantage of higher prices according to last week's new data, produced for the World Platinum Investment Council by precious-metal specialists Metals Focus.
Demand in contrast – where platinum's industrial uses are still led by autocatalysts, fitted to reduce harmful emissions primarily from diesel engines – slumped by 44% compared to the third quarter of 2020, thanks to the global microchip shortage denting new vehicle production and sales, plus heavy outflows from ETF investment funds and trading-exchange inventories.
Last year saw platinum investing hit an all-time record, overtaking autocat use for the first time in at least half-a-century after prices slumped to 12-year lows amid the Covid Crash hitting industrial commodities as the pandemic went global in February and March.
All told, this year's demand-side problems will put the 2021 platinum market into a "significantly larger than expected surplus" said Paul Wilson, CEO of the World Platinum Investment Council, launching the new data last Wednesday.
For 2021 as a whole, the Council's latest data predicts that platinum mining supply will rise 25.0% from last year's 21-year low, with secondary supply from scrapped cars and industrial recycling set to rise 3.2% year-on-year. Total demand is meantime forecast to drop by 4.9%.
Another "significant" surplus is then due in 2022, says the World Platinum Investment Council's latest report, but it will possibly be reduced by a recovery in autocatalyst demand – platinum's single largest application – plus growing use of the precious metal in hydrogen fuel cells.
This technology, with the potential to produce energy with zero-carbon emissions, uses platinum as a catalyst to generate electricity when hydrogen from a fuel tank is mixed with oxygen from the air, creating only pure water as waste.
November's COP26 climate summit in Glasgow saw 28 major businesses, including mining and fossil-fuel giants such as Anglo, BP and Shell, commit to " accelerating the use and production of hydrogen as an essential part of the future net-zero energy system."
Hydrogen production and fuel-cell targets are also clearly set out in the end-of-coal 2030 plan announced last week by Germany's new "traffic light" coalition government, finally agreed between the Social Democratic Party (SPD) of new Chancellor Olaf Scholz and the Free Democratic Party (FDP) and The Greens.
While aviation, rail and factory-plant electrification offer scope for hydrogen fuel cells where battery-electric technologies can't reach, "fuel cells [are] finally getting political backing for vehicles, especially heavy duty," says precious metals analyst Rhona O'Connell at brokerage StoneX, making "the outlook [for platinum] very promising."
As it is however, hydrogen fuel-cell demand doesn't yet warrant its own line on the platinum demand tables published either by the World Platinum Investment Council or by refining and technology specialists Johnson Matthey (LON: JMAT).
"Platinum is still seeing what looks like offloading from the auto sector in both the US and Germany," explains O'Connell at StoneX, "plus the dreadful downdraughts of the semiconductor chip dislocations" hitting automotive production and therefore catalyst demand.
"Hong Kong and China are taking metal in, but for now they are the only bright spots."
China VI laws for heavy-duty vehicle emissions came into force this July, says a separate note from analysts SFA (Oxford), writing for German refining group Heraeus.
But while these rules "predominantly" benefit platinum loadings on each new diesel-engine's autocatalyst systems, "sales of HDVs in China have slumped since the change came in," because customers had already rushed to buy ahead of the change making new trucks more expensive.

2022 will see China's HDV sales fall 16% year-on-year, SFA forecasts, "normalising at 2019 levels" but still equating to lower platinum demand from the sector overall, despite the higher loadings due to China VI .
"A slowing Chinese economy is a further risk for HDV sales," the consultancy concludes, pointing to Beijing's clampdown on real-estate speculation.
Comparing China's solid 2021 platinum imports with sharply lower imports of sister-metal palladium – which finds well over 4/5ths of its end-use demand from autocats to cut carbon emissions from gasoline engines – "it could be that China had previously built domestic stocks of palladium which are now being drawn upon," says the World Platinum Investment Council, "or it could be that there is greater substitution ongoing within the automotive sector," whereby the cheaper metal replaces palladium to cut production costs.
"Beyond China," the Council goes on, "it is also possible that the scale of platinum substitution for palladium is being underestimated...[Together] with high China imports [this] could be keeping market availability of platinum low."
Platinum prices have, on BullionVault's analysis, shown a greater tendency to rise when the market tightened than to fall when supply deficits shrank or a surplus of excess metal expanded over the last 45 years.
Year-on-year in the platinum market, mining supply grew relative to net end-use demand 22 times since 1976, with platinum prices falling in 55% of those years. Across the 23 years of growing deficits or shrinking surpluses, the platinum price rose 70% of the time.