END_OF_DOCUMENT_TOKEN_TO_BE_REPLACED

Why investing in platinum really goes against the crowd today...
CAN'T the platinum market catch a break? asks Adrian Ash at BullionVault.
Just as platinum rallied from new 2017 lows...and rallied from a near-record discount to the price of gold..."The Chinese are going to mine trillions of dollars-worth from asteroids," gasped the headlines this month.
"A single asteroid the size of a football field could contain $25 billion to $50 billion worth of platinum," gushed Fox News, quoting a Goldman Sachs investment analyst...
...who was quoting a 2012 story from Reuters...
...which quoted a would-be asteroid mining company that has switched instead to launching low-cost space telescopes...
...and which seems, to date, to have been far more successful at launching capital-raising on the stockmarket than getting stuff into orbit.
But so it goes for the 'unmeltable metal'.
Contrarian investors hunting for cheap and hated assets should look no further. You can get yours at a market-beating 0.5% maximum dealing fee (and with no VAT sales tax to pay) using BullionVault here.
But that's not to say platinum can't become cheaper or more hated yet. Going against the crowd is a rare, lonely, even foolhardy trade by definition.
"It's incredibly tough out there," said Chris Griffith, CEO of giant South African miner Anglo American Platinum Ltd, speaking to Bloomberg ahead of London's annual Platinum Week this May.
"Market sentiment is negative towards platinum at present and that begins to feed on itself irrespective of the long-term fundamentals of supply and demand."
Negative sentiment? As this handy platinum infographic shows, platinum's single largest use today is for reducing harmful emissions from diesel engines...
...and the only thing more hated than platinum right now is diesel.
Never mind that reducing diesel emissions will likely require more platinum, not less (as the example of China clearly shows). Never mind that diesel engines cannot (and won't) be replaced by petrol in trucks or heavy-duty machines, nor by electric any time soon (no matter how breathless the Tesla coverage gets)...and forget that battery-electric cars will remain a fraction of new passenger vehicle sales (albeit less tiny) and will still need selling at a loss to manufacturers until the mid-2020s, with a full switch "decades away" according to even the most enraptured analysts.
So forget too that, while all 24,000 of London's iconic 'black cab' fleet must be replaced by hybrid electrics by January 2018's deadline from the Mayor's office, current plans (and subsidies, natch) mean there will be enough fast-charging points for only 1/6th of them (even if they all line up and plug in the next recharge with zero delay) and with enough for only 60% scheduled by 2020. Because with smog and acid rain caused by the nitrogen oxides (NOx) spewed out by diesel engines, diesel's lower carbon dioxide output counts for nothing – even if it's vital to any hope of meeting global CO2 targets...and never mind either that platinum finds just 40% of annual end-use from auto-catalysts anyway, versus 75-80% for palladium, which is suddenly every analyst and pundit's favorite catalytic precious metal.
No, what matters is the headlines right now. And when the headlines aren't blaming diesel for countless needless deaths, they effectively say that ' Platinum catalysts make house prices fall' – at least in the minds of traders trying to stay on top of such things. And so, catching on almost two years after the VW scandal first broke, hedge funds trading Comex futures and options have now built their first-ever bearish bet on platinum prices – net of that group's bullish bets – on the 11 years of available data. 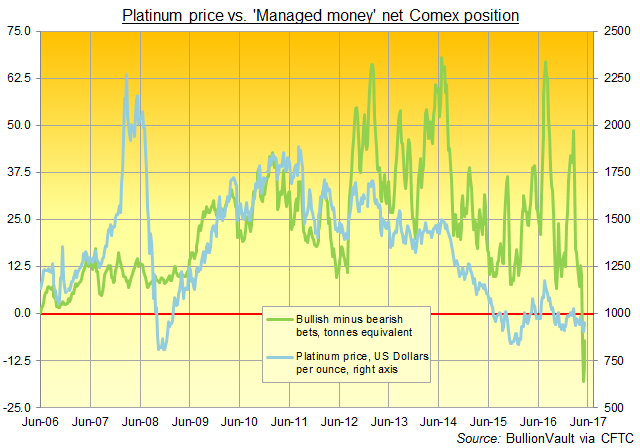 Along with demand, supply was also at issue as the market met for Platinum Week here in London. Because the long-discussed "deficit" of supply to meet demand hasn't done anything to stem the metal's 5-year drop. Not yet.
"Unicorns were imaginary creatures, fabled for escaping danger and returning periodically," wrote bullion clearer ICBC Standard Bank's Tom Kendall for his Platinum Week report to clients.
"The same seems to be true of the 'significant deficits' that have supposedly been a feature of the platinum market for several years."
Deficits have also been a feature of the silver market too, and with an equally zero connection to that cheaper precious metal's price direction. But while no-one seems to care (let alone explain) what this apparent shortfall of supply versus demand means for the silver market, in platinum – a market barely one-tenth the size by the value of annual end-use – it remains the focus of forecasters' attention. Especially now it might be over.
Refiners Johnson Matthey now foresee a small surplus of platinum supply over demand for 2017, the first in 5 years. So do analysts Metals Focus, launching their Platinum & Palladium Focus 2017 at a drinks reception in the City of London on the Monday of Platinum Week. Competitor analysts Thomson Reuters GFMS see only " a small fundamental deficit...as mine production continues to be hindered by the lack of investment in earlier years." So do analysts SFA Oxford, compiling data for the mining-backed World Platinum Investment Council and forecasting the smallest shortfall of supply since at least 2012.
But if platinum's "unicorn" deficits failed to support or boost its market value over the last 5 years, should we really now expect a near-zero deficit or even small surplusnow to work against prices? The fundamentals didn't count (or were confused at best). So a bloody-minded investor might want to go uber-contrarian...and reject the very idea of expecting supply vs. demand = price. Because it hasn't worked like that since 2012, when the apparently fabled deficits began. Nor did it work for the decade before that, when the metal averaged a 10% annual gain yet apparently saw a significant surplus in 3 separate years. And now platinum is at, or near, a surplus once more.
Versus the fundamental data in short (or versus a simple reading of its impact), sentiment looks by far the bigger issue. And with hedge funds and other speculators now holding more bearish bets in platinum futures and options than any time in at least 10 years – and almost matching the record peak by bearish value of June 2015 – is there anyone left to sell it short?
On a valuation basis, platinum's pricing against gold also looks stretched, at least against the last 100 years or so. Trading at a premium pretty much throughout the 20th Century, platinum has fallen to a record discount of $300 and more per ounce versus the softer, yellower, and relatively useless metal (industrially speaking). So again, a handful of the enquiring minds attending Platinum Week here in London this month wondered aloud how much longer this modern anomaly might last, or at least hold its current level. 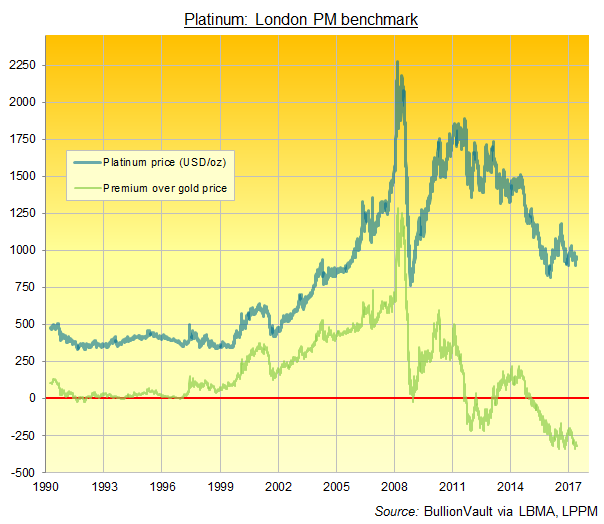 Another valuation tool favored by platinum analysts is to measure it against palladium, and here again, bloody-minded investors might spy a contrarian trade. The cheaper metal – primarily used to clean toxic emissions from petrol (aka gasoline) engines – has risen near parity with platinum around $900 per ounce, and it's now a question of when, not if, palladium rises above according to analyst Ross Strachan at GFMS.
That switch happened briefly at the turn of the millennium. Briefly meaning 2.5 years, thanks to what analysts charitably called Russia's "erratic" attitude to releasing supplies from 1998 to 2001, plus the out-sized boost to speculative sentiment it created. Palladium then fell more than 85% from its peak over the following 2 years. Platinum was flat. And back in today's fundamental facts, "Platinum can be used in gasoline catalysts," as David Jollie (now at miner Anglo American) reminded trade association the London Platinum & Palladium Market members attending its annual seminar in Platinum Week. Whereas palladium doesn't work in diesel autocats.
That makes the underlying question for platinum one of "total automotive demand, and not just about diesel." Because a small shift in pricing would invite a fast, heavy and price-reversing switch in platinum versus palladium use.
"Media reports about platinum and diesel are often simplistic, even misleading," said one senior platinum mining executive in a speech at Platinum Week. Indeed, platinum demand for autocatalysts rose for the fourth year running in 2016, reaching its greatest level worldwide since 2008. But "we've let others dictate the narrative," he went on, "and it is perhaps too late to turn that story around in Western Europe."
Sentiment might trump reality, in other words. But forever?
As it is, "Newspapers focus on the end of diesel as air quality strategy published," said one summary of the UK media's coverage of this month's new policy paper. But while European diesel use does of course matter to platinum, the tide of anti-diesel coverage is really only a European issue, as David Jollie noted at Platinum Week – and even there it's only really an issue for small cars and other light duty vehicles.
Starting from its current 50% share of West European light-duty sales, diesel engines will retreat to 34% by 2024 reckon automotive analysts and forecasters LMC. For heavy-duty European demand, in contrast, diesel will retain its 97% share. Because you can't swap out diesel engines for gasoline in trucks – and whatever you imagine electric can do for light duty, it's hard to get beyond battery-powered milk floats or slow lorries with 60-mile ranges but 3 hours recharging times when it comes to shipping goods.
On the other side, "Supply will become increasingly constrained in 2017," says the new quarterly report from the mining-backed World Platinum Investment Council, thanks both to lower investment over the last 5 years of falling prices but also now serious debt, cost and revenue problems for major producers.
With all this in mind, "an increasing number of investors...are once again considering the precious metal," says the group's CEO, Paul Wilson. If you've got the nerves needed, and you think platinum might offer a good-value investment today, you won't find it cheaper, safer or easier than using BullionVault here.