END_OF_DOCUMENT_TOKEN_TO_BE_REPLACED

Imagine the Nasdaq bubble had no crash...

What was expected after the election by Wall Street was a rebirth of growth through pro-business policies, a giant stimulus from tax cuts and a sweeping infrastructure package within the economy. Growth expectations have been languished and slowly ground to a halt at near 1% GDP growth.

Real GDP growth is close enough to zero when you realize that they're understating inflation. If you look at nominal GDP, which is roughly 3.5% to 3% a year at most, and you take a real measure of inflation from that – there isn't much left.

All of the expectations that have been priced into the market and still linger will eventually come to terms with the fact that none of the anticipated growth is happening.

Government leadership hasn't even started on a tax bill yet. They also haven't started on the budget resolution for fiscal year 2018. There is a somewhat arcane machinery for the fiscal process to passing such a bill but without a reconciliation instruction.

Currently there is a filibuster proof majority in the Senate holding 60 votes. What that means is there's not a snowball's chance of anything passing. There would need to be a reconciliation instruction for the 2018 budget that would begin October 1st in order to bring a tax bill through committee and to the floor of both houses.

Congress hasn't even started the budget resolution process and while some people may think it's still early, the hour is late. There are very few legislative days left between now and the start of the new fiscal year and we don't even have any semblance of a budget resolution.

Revenues, spending and tax policy must be approved and voted upon with consensus in the Republican majority. Achieving all of that in the House and the Senate is going to be virtually impossible. This is why the stimulative tax bill that was expected is dead in the water.

Now we are in early July and we've had weeks and months of the Trump presidency go by with almost nothing to show for it, other than controversy and continued efforts to relitigate over Russia. Because of all of this distraction, there has been virtually nothing done and even on the simple priority of repeal and replace Obamacare, we're essentially nowhere.

I think the leading indicator is that if Congress can't even repeal and replace Obamacare, when it was the substantial issue that Trump ran on during the campaign, that the Imperial City is frozen.

The only reason that I can see why the stock market remains at peak bull is the same reason why the S&P500 is sitting up at $2450. It's what I call the nosebleed section of history on a valuation basis.

By valuation, I mean that we're at 20 or 25 times the $100 a share that the S&P500 companies earned on a Generally Accepted Accounting Principles (GAAP) basis in the 4 to 12 month range ending in March. Now 25 times earnings is not only statistically a high number, it's above 90% of the observations in the last century.

The question is, why believe that it's safe to be in the casino and pay 25 times earnings this late in the cycle, when a recession is inevitable within the next year or two? Earnings are going to collapse $50 or $30 a share – just like what happened last time.

Why would you keep paying such high multiples for earnings that are bound to decline big? In a high risk/reward atmosphere, the likelihood of upside gains from $2450, where it was a couple days ago on the S&P500, is comparable to the downside risk if and when the economy dives.

We are now at peak bull. The only thing holding this together is a belief that somehow, despite the media eating Trump alive, robo machines and day traders refuse to see this coming. It can only be explained by a belief that Donald Trump is going to pull a rabbit out of a hat and we're going to get the second coming of Ronald Reagan.

Even if we could get the second coming of Ronald Reagan, we wouldn't want it because the 1980s were not all they're cracked up to be. Not to jump on Ronald Reagan, he was in many ways a great president, far better than most. He did have the right intentions, the right philosophy, he was a small government conservative who wanted lower taxes, etc.

What is important to remember is that none of what Reagan anticipated panned out. When the politicians got ahold of the White House, the tax bill and spending proposals, they failed dead on the spot and ended up with a big tax cut and massive stimulus.

That wasn't the supply side of Reaganism. It was accidental Keynesian debt-fueled deficit funded stimulus that helped the economy for a few years. It did not have a lasting effect, and is not something we can do today because we currently hold $20 trillion in debt. 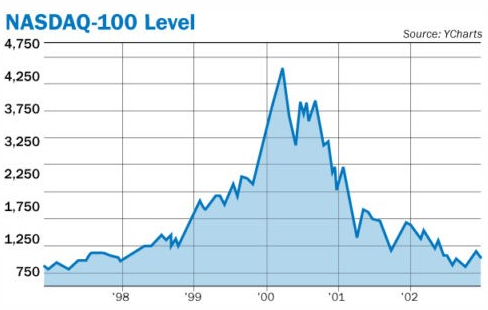 Above is the Nasdaq 100 at peak bull before a bubble. If you simply put your hand where that peak bull line leads and ignore what's on the right side, you could believe that there was no peak bull.

You could ignore the signs and believe that this time is different. That somehow Alan Greenspan and the Fed could unleash miracles of technology and economic growth never seen before and that it wasn't too late to keep buying stocks.

If you had, within days, the market collapsed by 10% or 15%. This was a massive bubble, and the financial bubble we're in today is far bigger, far uglier. Ignorance today is far less justified. If you had been drinking the Kool-Aid starting at the very peak on this chart, you will have lost 85% of your money in two years had you not gotten out.

I think we're very close to this peak again. Fast forward 17 years and the same thing could happen if you don't get out of the way. It's clear that the casino is now faltering and teetering toward disaster. It won't take much to blow the whole house of cards down.

It's better to look like a fool before the bubble pops than to be one afterwards. I happen to be born the same year as Donald Trump. That was the first class of the baby boom. The baby boom getting hurt by markets now simply won't get another chance. If you got blown away in the '87 crash, you could come back. If you got hit by the dot-com buzz, there was still a chance to recover. Even if you got slammed in 2008 and you were very courageous or even foolhardy to jump back in, perhaps you've recovered most of your lost ground.

Now there is no more time and when this one collapses, there's two things. First, most of the baby boom generation will be out of time. Second, there will be no snapback because I believe the Fed has finally played its last hand. It's out of dry powder, with the size of the balance sheet it has basically trapped itself into a corner.

When the market collapses, there is going to be very little ability for Washington, either on the fiscal or the monetary side, to bail it out.

It is important to always remember what's at risk and the danger that we face. The proposition that somehow Trump can pull a rabbit and create a revival of what allegedly happened during the 1980's is just not possible.

What the Reagan revisionists claim happened, didn't. That's not for one of trying and not for a lack of good intentions, but as an empirical matter.

Murphy's Law flattened the Reagan economic program. Whatever could go wrong, did go wrong. The defense budget increase was far bigger than anybody planned. The tax bill ended up double the size that we actually laid out. The point is, it isn't what it was cracked up to be and was an accident of biblical proportions.

That is not something that we could replicate today. As the chart above shows, Reagan started with essentially a clean federal balance sheet. The total debt was $930 billion. When we took off, it was 30% of GDP. That seemed high at the time, but relative to where we've come since, it meant there was a lot of room. There was headroom for debt increases that, at least in the short run, could be used to fund the tax bill.

When examining the green arrow on the chart, you can see where Trump is starting. He's starting with nearly $20 trillion of public debt. In other words, it's exploded 20 times over those years.

We're now at 106% debt-to-GDP. There isn't room to have another Keynesian miracle either by accident on purpose. In the 1980's, as the Reagan plan developed there were actual budget surpluses projected for the middle and latter part of the decade. Not only did we have a relatively clean balance sheet to start out with, but under the fiscal mechanism in place, there was the ability to reduce the revenue without going deep in debt. Today, that's all gone.

There is no bracket creep. What we have now with all the fiscal irresponsibility for the last 30 years, is a built-in budget deficit that's getting larger and larger.

With each passing year we've added trillions in optimistic economic assumptions that span the next decade. That's before a dime of a potential Trump program is put on the table. Before any additional Trump programs take place, in my judgment (contrary to the CBO $10 trillion) I say $12 to $15 trillion of built in spending.

The Gipper may have got away with failure because Washington kicked the can – by continuing to borrow and print money – for the next 35 years.

That inflated financial bubble which has been building since 1981 will finally implode.

This time it will stay imploded because the monetary and fiscal branches of government have finally exhausted their ability to defy the basic laws of economics and sound finance for good.