END_OF_DOCUMENT_TOKEN_TO_BE_REPLACED

Bigger even than the 2007 volcano...
SO THIS is getting interesting again, writes Bill Bonner in his Diary of a Rogue Economist.
If it is just "volatility", as Wall Street's shills in the press maintain, it will probably pass soon. Everything will be okay. Back to routine imbecility before the end of the month.
But if these whipsaw movements are heralding a bear market, US stock prices could be cut in half...or more.
And they may not recover for 10 to 20 years. (Catch up on the details of our bear market forecast here.)
No one knows, of course. But it looks to us as though the whole shebang is getting ready to collapse.
So far, the correction has trimmed $12.5 trillion off the value of global stock markets. There are a few reasons for stocks to go back up...and many reasons why they might want to go down further.
The 2008 global financial crisis was centered on mortgage debt. There was too much of it that couldn't be repaid. When the value of the collateral – homes – headed down, the bubble popped.
Today, consumers have about the same amount of debt. But now the excesses are in auto loans and student debt.
As you can see below, total auto loans stood at about $781 billion in 2007. Today, they've topped $1 trillion.
And student loans have more than doubled over that time to $1.3 trillion. 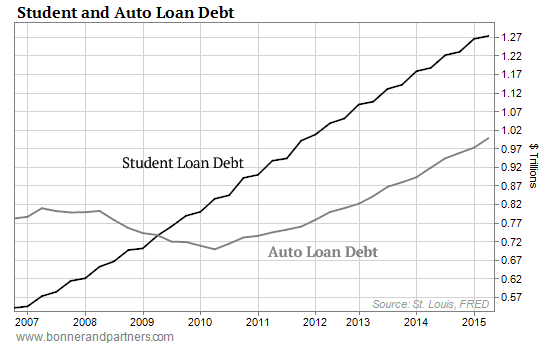 Again, the collateral is falling in value.
Used-car prices fall, as leases expire and more used cars hit the market.
As for student debt, the "collateral" is the earning power of the person who borrowed the money.
And here's a hint of what is happening to that. According to the Center for Immigration Studies, all of the net gains in jobs since 2007 have gone to immigrants – both legal and illegal.
And the vast majority of those jobs have been gained in the hospitality industry – waiters, greeters, busboys, etc. (low-wage jobs).
That's why student loan default rates are soaring. The "collateral" isn't as good as lenders thought it was.
But today, we're going to look at corporate debt, which has risen to $5.2 trillion from $3.2 trillion in 2007...
As we've been reporting, C-suite cronies have been taking advantage of the Fed's ultra-low rates to borrow money...buy back shares in their own companies...and pay themselves fat bonuses as the remaining shares go up in price.
(When corporations buy back shares, they cancel them. This automatically raises the earnings per share of the outstanding shares and increases their value.)
But that scam could be about to come to an end. Reports the Financial Times:

"With a $4 trillion mountain of debt maturing over the next five years, corporate America's reliance on cheap cash is about to get tested.US corporate treasurers have rushed to lock in cheap borrowing costs in advance of the expected rate rise, refinancing more than $1 trillion each year between 2012 and 2014, according to Standard & Poor's.
"Tighter borrowing conditions will mark a turning point in the recent debt binge. Companies have had easy access to cash to write checks for multibillion-Dollar takeovers, to fund buybacks and dividend strategies – all welcomed by investors as share prices rallied off 2009 lows.
"But as rates turn higher, investors may see the flip side of cheap financing. Analysts warn companies will begin defaulting in greater numbers, particularly in the energy sector, which has found itself in the line of fire as commodity prices languish."

You will hear from the talking heads that America's corporate sector has never been in better shape.
But like a peach, the fruit never looks better than just before the rot sets in.
Here's what really happened...
Thanks to a generous Fed, since the financial crisis hit, companies have been able to borrow at interest rates so low you need to get on your hands and knees to find them.
And they used much of this borrowed money to boost their share prices via buybacks.
Hey, presto! The trick is done right in front of our eyes.
Stock prices rise. And as stock prices rises, companies' debt-to-equity ratios – which show how much debt they are using to finance growth relative to the value of their shareholders' equity – improve.
The companies may have more debt...but they have a higher share price to justify it.
When the mortgage debt bubble blew up in 2007, it was the weakest segment – subprime – that detonated first. It will be no different in the corporate sector.
Here's the FT again, on subprime corporate debt:

"Moody's and S&P warn that defaults are likely to increase in the coming years as interest rates rise, a concern echoed by bond funds such as Pimco.Analysts with S&P expect defaults among junk-rated US companies to hit 2.9% by June 2016, nearly twice the rate in 2013.
"Moody's list of companies rated B3 with a negative outlook or lower – its lowest rating rungs in the 'speculative' space – eclipsed 200 for the first time since 2010 in July.
"Corporate earnings have started to plateau this year. And share prices are no longer steadily rising as they have been since the last bear market bottomed in 2009."

What happens when lenders are no longer willing to extend credit to corporations?
We know exactly what happens – because it happened twice before in this century.
In the run-up to the 2000 and 2008 stock market peaks, stock prices rose...and the fruit looked juicier and juicier.
Then credit collapsed...stock prices plunged...and things headed back to a more normal situation – until the feds got in on the act again.
Our advice: Eat the peach now.