END_OF_DOCUMENT_TOKEN_TO_BE_REPLACED

Would America be any worse off if Hank Paulson had simply told the truth...?

"WE DO NOT WANT a disclosable event."

Specifically, the Paulson bail-outs sought to divert hundreds of billions of taxpayer dollars toward Wall Street finance companies, and to do so as secretly as possible. In the name of "systemic risk", the former Treasury Secretary dispensed hundreds of billions of dollars to the likes of AIG, Citigroup, and his former employer, Goldman Sachs, without ever seeking or receiving a single vote from an elected official.

Thus, as it turns out, the only system genuinely at risk during Paulson's tenure was the American system of honest and transparent financial markets.

The initial bail-out facilities were created and implemented by Paulson and Bernanke, two unelected officials. And none of the initial bail-out schemes ever faced scrutiny from elected officials, much less a formal vote. Even though some of the subsequent bailout programs, like the TARP, did face a vote in Congress, the Treasury Secretary continued to champion numerous ex-legislative activities, like the backdoor bailout of Goldman Sachs through the $170 billion bailout of AIG, and the shotgun takeover of Merrill Lynch by Bank of America.

According to the Feb. 26 testimony of Bank of America CEO, Ken Lewis, before New York State Attorney General, Andrew Cuomo, Paulson strong-armed Lewis into completing the Merrill takeover, without disclosing to B of A shareholders that Merrill's losses were much larger than publicly stated.

"Lewis testified that he asked Federal Reserve chairman Ben S. Bernanke to 'put something in writing' regarding the US government's plan to support pack of America's acquisition in view of Merrill's mounting losses," Bloomberg news reports.

"After Bernanke said he would consider the idea, Paulson called Lewis and said, according to Lewis, 'First, it would be so watered down, it wouldn't be as strong as what we were going to say to you verbally, and secondly, this would be a disclosable event and we do not want a disclosable event."

Inconveniently, non-disclosable events are also illegal events. "Paulson kept the Securities and Exchange Commission, which is responsible for making sure companies disclose material information to their investors, in the dark, according to Cuomo," Bloomberg news continues.

"The allegations [by Cuomo] suggest Paulson and other policymakers may have resorted to breaking securities laws in order to protect a fragile financial system..."

Do the ends justify the means? Yes, if you're a muckety-muck at Merrill Lynch or Goldman Sachs. No, if you're anybody else. Paulson's groundbreaking lawbreaking facilitated the survival of institutions that deserved death, in the process amassing trillions of dollars of fresh liabilities for American taxpayers who deserved to be left alone.

The adverse effects of these criminal acts extend far beyond annoying us here at the Rude Awakening. For one thing, bailing out incompetent executives enables the incompetent executives to continue their incompetent behavior. For another thing, lavishing hundreds of billions of dollars upon ailing, functionally bankrupt companies, promotes a web of deception and illusion that impedes the healing process that would lead to a bona fide recovery.

If you hand $10 billion to any bankrupt company in America, that company will seem healthy for a while. The truth of the matter is that the Paulson bailouts, along with subsequent multi-trillion initiatives, have injected various finance companies with short-term stimulants that produce an image of health, while leaving the underlying disease untreated.

The resulting fraud is that diseased corporate entities appear to be recovering. They can pretend they are A-Okay once again, while the top brass at these companies can pretend they no longer require government assistance – certainly not any of that dreaded TARP money that imposes limits on obscene executive compensation.

Eventually, as a result of all these falsehoods, investors begin to imagine that they actually see what the finance companies' CEOs pretend to see. And before you know it, you've got a great big rally in bank stocks, fueled by nothing more than deception, hype and hope.

Am I being too hard on the Wall Street boys and girls? I think not...and nor does my colleague at the Australia Daily Reckoning, Dan Denning:

"So the banks have returned to profitability have they? If that were true, bank balance sheets would also be recovering. But that's not true.

"The big three banks reporting recently – Citibank, Goldman Sachs, and J.P.Morgan – all reported huge revenues from their trading desks. As reported last week, Goldman's $6.6 billion in trading revenues was not only 70% of total revenues, but it was also a ten billion dollar improvement on a $4 billion loss in the fourth quarter.

"But something magical happened in the fixed-income trading group for Citi. If you dig into the quarterly report, you'll learn that fixed-income trading revenues were boosted by a net $2.5 billion positive CVA on derivative positions, excluding monolines, mainly due to the widening of Citi's CDS spread.

"That takes some sorting out. A CVA is a 'credit value adjustment.' As you can learn here, it's the credit risk premium of a derivative contract. Once you sort it out, you learn that Citi 'made' $2.5 billion on a derivatives position designed to profit when the companies own credit default swaps spreads widen.

"Or, in plain English, Citi profited because it made a bet that the cost of insuring itself against a default would go up. The credit default swap market is the place where you can bet on the credit worthiness of a firm, or, essentially, the chance that a firm might default on its bonds. Citi appears to have reported a $2.5 billion trading gain in the fourth quarter precisely because the market thought the company stood a good chance of failing (hence the widening CDS spread).

"As far as we can tell, if you use this kind of perverted logic, the closer Citi gets to bankruptcy, the more money it would 'make' on its derivatives. That shows you how bogus the quarterly number was. The company reported declining revenues in its core banking and lending activities. But thanks to fixed income and this handy $2.5 billion CVA, the company was able to report $1.5 billion in net income.

"Also, don't forget that all of the banks benefitted from what financial sector analyst Meredith Whitney called back door financing." Whitney described what amounts to Fed-sanctioned front- running of the fixed income market by the banks. The Fed publicly telegraphed its intention to buy $750 billion mortgage-backed securities from Fannie Mae and Freddie Mac and $300 billion in US Treasury bonds. And that was AFTER it announced in late November of last year it would be wading in as a buyer for all agency bonds to support the US mortgage market. In other words, the big banks were able to take positions in the exact securities that they knew the Fed would be buying. Huge profits were not guaranteed, just highly likely.

"Since the financial statements of the banks don't break trading revenues out a line item basis, it's hard to say how much money each bank may have made by frontrunning the Fed's actions in the bond market.

"But from the looks of it, what we have here is a kind of back door subsidy to bank profitability provided by the Fed. First quarter earnings were strongly boosted by an increase in the valuations of mortgage-backed securities that went up with Fed buying. Before you get all excited about the recovery in financial stocks, you may want to keep that in mind."

And let's also bear in mind, dear investor, that the AIG bailout may have contributed mightily to Wall Street's enormous trading profits in the first quarter. According to a widely circulated theory, Paulson bailed out AIG so that AIG could bail out Goldman Sachs and other ailing Wall Street firms.

Whether directly or indirectly, intentionally or unintentionally, the federal government enabled the big Wall Street banks to produce billion-dollar profits in the first quarter. Certainly, the federal government will attempt to repeat the performance in the second quarter. But we suspect the jig is up. We suspect the trading profits of the first quarter were one-off events that will not become two-off events.

As a result, we suspect that finance company earnings will resume their downward trajectory throughout the rest of the year, as adverse real-world trends swamp government-subsidized trading profits. 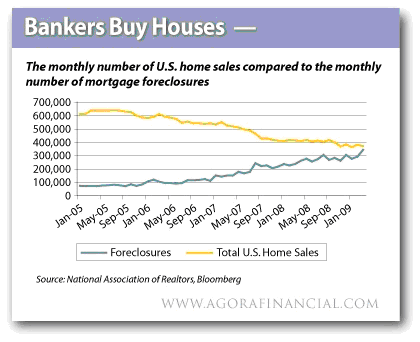 The truth is that banking profitability is not actually recovering, and neither is the economy. And that means that every stock market rally rests on shaky ground.

The nearby chart tells the tale...or at least most of the tale.

And one final thought: Would America be any worse off if Paulson had simply told the truth?