END_OF_DOCUMENT_TOKEN_TO_BE_REPLACED

US municipal "muni" bonds are over-valued and overdue for a slump...

OF ALL THE speculative excesses that misguided monetary policy and a prolonged recession has caused, the one that poses the most danger to investor wealth is the financial bubble in state and local municipal bonds, writes Martin Hutchinson at Money Morning.

Municipal bonds – usually referred to as "munis" – are very popular portfolio plays because of tax advantages that, in effect, enhance their rates of return. There's also an allure because of their local nature: Investors can invest in specific bond issues that provided the money for projects such as schools, highways, bridges, hospitals or housing that actually affects the community in which the investor lives. That makes them a very tangible investment.

But there's a problem.

State-and-local-government finances have taken a bigger beating during this economic downturn than during any other recession since World War II. Even worse, that beating came after the easy money available during this stretch encouraged those same governments to venture well beyond any reasonable limits in terms of their borrowing. They're now stuck with a bigger-than-warranted debt load – which can't be covered by the property tax stream that's been reduced by record-level housing defaults.

The bottom line: At the present time, "munis" may not be the benign – or even alluring – investment that they've been in the past. In fact, thanks to continued fallout from the worst financial crisis since the Great Depression, some munis may be more akin to bombs than bonds – ticking away and just waiting to blow up your portfolio.

Theoretically, state governments should not have this problem. All the states – with the sole exception of Vermont – have prohibitions against running budget deficits. Those prohibitions are in place for a reason: By avoiding deficits during healthy periods, the budgetary strain won't be nearly as severe when tax receipts and other revenue drops off during a downturn.

Defensive Investing Unfortunately, states have discovered various accounting dodges to get around the deficit prohibition, meaning the supposed safeguards aren't all that tight. 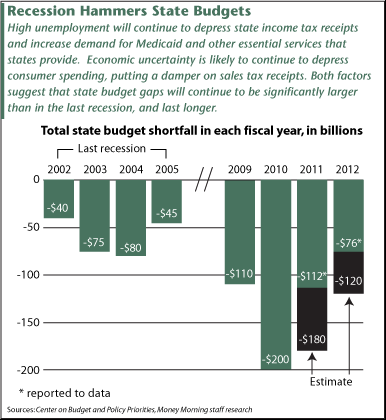 But the outlook is actually going to get even worse: The federal stimulus spigot gets turned off in December, ending a flow of funds that states had been using to offset their revenue shortfalls and narrow their budget deficits. Make no mistake: The end of the stimulus money will leave a huge funding gap going forward.

In most cycles, energetic economic recovery rescues state budgets, although state budgets typically lag – for example the state budget gap peaked in 2004 after the 2000-2001 recession.

Given the poor current financial condition of so many of the U.S. states, a drawn-out/sluggish recovery – or even worse, a "double-dip" recession – could upend state finances for years to come.

Recession Hammers At the municipal level, the primary revenue source – aside from "direct transfers" from state coffers – is local property taxes. Property-tax rates are set as a percentage of home values. When the housing bubble caused stratospheric increases in housing values in the middle part of the decade, property-tax revenue soared in kind – enabling municipalities in thriving areas to expand lavishly.

Since 2007, needless to say, this has all been reversed. What's more, if municipalities respond to declining house prices by jacking up property tax rates, as many are doing, they run the risk of causing a wave of regional mortgage delinquencies.

Homeowners who were already struggling to make ends meet now find themselves facing an additional cash-flow demand that they cannot meet. Some in this predicament may gamely stick with it for awhile, attempting to meet the additional demand in order to keep their mortgage current – before finally succumbing to the inevitable realization that they just can't do it. Others literally walk away from an asset that has declined in value and become a burden.

In either case, the homeowner defaults on their mortgage. And needless to say, any further decline in house prices following the ending of the $8,000 buyer subsidy will strain municipal finances further.

Municipalities – like many homeowners – are struggling to make ends meet. Municipal-bond defaults may soar well beyond 2009's $6.4 billion, the most since 1992.

Last year, the state in most difficulty appeared to be California, because of the severity of the real estate decline and because of its dysfunctional state government, in which spending restraint appears to be almost impossible.

This year, investors should turn to Illinois, where the recession has been severe, producing a current unemployment rate of 10.4%. Here the quality of state government is indicated by five of the last nine governors having served prison sentences (not counting ex-Gov. Rod Blagojevich, who's currently on trial).

Illinois just borrowed $900 million in a bond issue that was very well received, being priced at a yield 0.15% lower than expected. However, that is much more a function of the high yield offered – nearly 7%, or 4% above equivalent US Treasuries – as well as the excessive liquidity in bond markets right now. Much of the demand for the bonds came from foreign institutions, which have a strong preference for government over corporate financing, because they don't understand the risks involved.

Meanwhile, on the spending side, Illinois state spending has risen from $56 billion to $80 billion in the four years since 2006, according to National Review's Kevin Williamson, who has been following this case.

There has been neither a state moratorium on payment since Arkansas in 1933, nor a full default since Pennsylvania in 1841. Nevertheless, the combination of poor-quality state governments, reckless overspending during the boom years, state pension systems that are totally out of control and a deep-and-prolonged recession following a severe housing downturn have lined the stars up for one or more state defaults in the next few years, unless the U.S. economic recovery really gains strength.

Some states, like New Jersey under new Gov. Chris Christie, may be able to drag themselves back from the brink – but it will require Herculean efforts to do so.

Nevertheless, it seems hopelessly unlikely that all the vulnerable states – and there are perhaps a dozen with considerable degrees of vulnerability – will be able to save themselves this time around. Only a few states – such as North Dakota, which is conservatively run, and which has oil-shale and mineral resources cushioning its recession – seem completely invulnerable at this time.

This will all come back to bite investors. With interest rates at historic lows (the U.S. Federal Reserve continues to hold the benchmark Federal Funds rate target down near 0.00%), investors have been searching for – and often reaching for – higher yields to boost their returns.

Last year, for instance, investors in that predicament poured $7.8 billion into high-yield municipal bond funds, pushing assets to a two-year high. But they may pay for that aggressiveness this year as default risks grow.

"People are starving for yield because rates are at zero," Paul Tramontano, co-chief executive officer of New York- based Constellation Wealth Advisors, which manages about $4 billion, told Bloomberg News. "They're taking [on] more risk than they think."

As we mentioned earlier, just because brokers say that the muni bonds they're trying to sell you are "safe" because they were rated as such by the credit-rating agencies, those are the same agencies that got it wrong on the subprime-mortgage sector.

They're getting it wrong again on states and municipalities.

Investing in Gold Bullion? For the cheapest, fastest & most secure route to solid Gold Investment simply register for a free, no-obligation account at BullionVault now...