END_OF_DOCUMENT_TOKEN_TO_BE_REPLACED

Expect more US banks to fail as the mortgage meltdown gets worse...

U.S. CITIZENS have mountains of debt to work through yet, says Chris Mayer of the Crisis & Capital newsletter.

The last bubble was one for the ages. And we've all heard stories of one kind or another.

America, it seems, just went crazy – borrowers, lenders, nearly everybody. These anecdotes and others are told in a new book titled More Mortgage Meltdown by money managers Whitney Tilson and Glenn Tongue.

But what caused the mania and how we got there is less to the point than what happens from here.

"If the problems in the mortgage market were limited to subprime loans, then the carnage would be mostly behind us," the authors of More Mortgage Meltdown note. Subprime loans were the riskiest mortgage loans. Prime loans were where the borrower made a substantial down payment and had good credit history. Subprime loans, by contrast, were to borrowers of poor credit quality and spotty job histories.

The bigger problem is that the mortgage bubble infected a number of areas beyond just subprime. The subprime crisis was the first to drop, like a marathon dancer that falls to the floor exhausted. But there are still other dancers on the floor ready to topple over too.

Take a look at this chart, which has gained some currency in the worried circles of financial people. It's worth a bit of study. It shows you the other dancers on the floor. 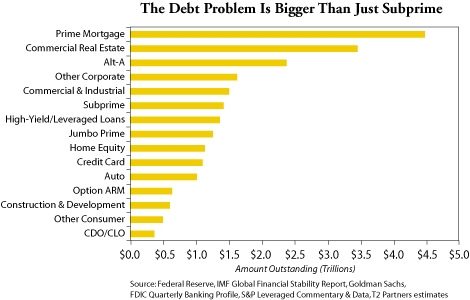 The first thing to jump out at you is that subprime is only about a $1.5 trillion market – not anywhere near the biggest of the risky loans. There are other layers here.

Subprime is only one slice of this low-grade bologna. It sits at the bottom. Alt-A is the next riskiest slice of mortgages above subprime. Alt-A are mortgages to people who are better credit risks than subprime, but still not prime. Documentation is still spotty as far as verifying income, and loan to values are high. Plus, about a quarter of these mortgages went to non-owner-occupied homes – meaning they were for "investors" and therefore subject to even greater speculation.

The scary thing is that this mortgage market of Alt-A loans is perhaps 50% to 100% bigger than subprime. Unlike subprime, Alt-A loans typically have five-year resets – meaning, the interest rates adjust to higher rates. The Alt-A reset surge doesn't really get started until 2010! It continues through 2012.

You'll also see something called "option ARMs" on that chart. These loans usually have ultra-low teaser rates and often were interest only. Again, the reset surge for these loans only starts in 2010.

You'll also see something called "jumbo prime." These are big loans – on average about $750,000. These were common in the most inflated bubble states, such as California and Florida, and were often made to poor credit risks. This is a market of $1-1.5 trillion – about as big as subprime.

Then there are home equity lines, which you'll see just below jumbo prime. As Tilson and Tongue write, home equity lines funded "in 2007, 30% of new car purchases in California and 20% in Florida." These loans are second loans, behind all the garbage I mentioned above. That means that many home equity loans will be a total loss for the lenders, as housing prices have collapsed and can't support the junk loans in first position, much less junior liens like home equity lines. (See nearby chart for a look at the housing price index collapse.)

I won't go into all of these loan categories, but I think you get the picture.

Moreover, the pattern for all of these loans was the same. You see rapid growth in the bubble years, roughly from 2000-2007.

In fact, the riskiest loans grew the most. You also see skyrocketing delinquency rates beginning in 2007 and continuing today – and massive losses for banks. Subprime was only the first wave. 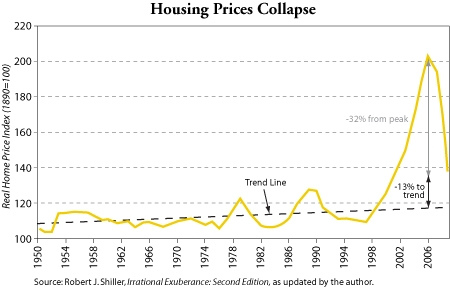 Through March of 2009, US banks had taken only $1.1 trillion in write- downs to date. Even the most conservative estimates put total credit losses at $2.2 trillion.

But Tilson and Tongue make a convincing case that the losses will be far worse than that – more like $3.8 trillion. And these numbers seem only to grow over time.

I remember sitting at a Grant's conference over a year ago when John Paulson, the fund manager who saw all this coming and profited mightily, tossed out $1 trillion as the number for total losses. That number induced gasps at the time. So I think Tilson and Tongue will be closer to the mark. It may well be even more than that when it is all said and done.

The fallout from all of this is that the banks will have to raise a lot more capital. They've raised only $1 trillion so far – yes, only. Given the high leverage in the banking sector, they may yet need to raise at least another $1 trillion. I don't see how that is possible in today's market. Where is the money going to come from?

Take a look at the nearby chart to see how leverage has increased over time. As banks' assets got riskier – with subprime, Alt-A and all the rest – they actually borrowed more to hold these assets. The typical bank has only 4 cents of tangible equity for every Dollar of assets. That means a 4% drop in asset value wipes out the equity – making the bank insolvent. As you can see, the banking system is vastly undercapitalized.

And this, then, answers the great fundamental question that seems to baffle so many market commentators.

Why aren't the banks lending? People point to the trillions of Dollars the government pumped into the economy, including on bank balance sheets. But the answer is that the bankers know they will need the money to cover losses from their toxic loan portfolios.

The banks are clearly not lending. Banks are cutting lines of credit to consumers – and to businesses, too. New loans in various business categories are down 60- 80% from where they were a year ago. It is hard to imagine any economic recovery when the banking system has such gaping funding holes it needs to fill.

As it is already, banks are failing and the losses are severe; on average, the losses amount to more than 40% of assets. The data coming in on foreclosure recoveries are bleak. In California, recovery is often less than 35 cents on the Dollar. It's not supposed to happen like this. It's like the hogs broke free and skinned the butchers. If this crisis is anything like previous cycles, we've got a long way to go on bank failures. 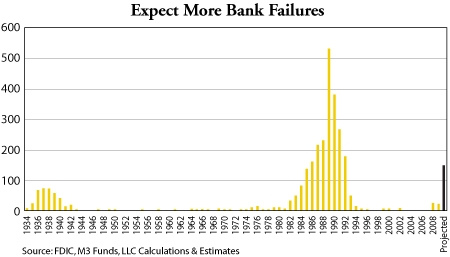 How do you invest in this environment? An early conclusion would be to still avoid banks and leveraged financial institutions in general. And don't expect the banks to start lending so freely again anytime soon.

That means you should also avoid businesses that depend on regular access to credit to grow – such as real estate investment trusts. I would also say that the housing market is not due for any recovery anytime soon. There is still enormous inventory to work through. Homebuilding stocks and related investments also face stiff head winds.