END_OF_DOCUMENT_TOKEN_TO_BE_REPLACED

Suggestions from history...
HISTORY suggests common outcomes when countries enter a crisis period, says Nathan Lewis at New World Economics.
While a common pattern for emerging market countries is a flight from the domestic currency, the pattern for Britain and the US (the top international currencies over the past two hundred years) has been for a flight to the currency. In other words, base money demand expands.
Base money consists of banknotes in circulation, and bank reserves held as deposits at the central bank. Thus, a rise in demand in base money in general implies a rise in demand for banknotes and bank reserves, in particular. This is not very hard to understand. In a crisis, people don't trust banks, and also interest rates are typically very low, so people hold more banknotes. Banks have basically the same impulse: they don't trust borrowers or each other, and also want to hold more of their equivalent of banknotes, bank reserve deposits at the central bank.
Since demand for base money is increasing, central banks are able to expand base money without much effect on the value of the currency. We will look, in particular, at World War I, the Great Depression and World War II periods, all of which had very large expansions of base money, but not much decline in currency value (inflation). There was some decline in currency value in all of these periods. But, in the midst of all the other things happening at the time, it was not very great and not very important. The British Pound was a floating currency during World War I, and its value sank vs. gold somewhat. But, you don't hear anyone complaining about it very much at that time.
What we have tended to see in these cases is: after the crisis passes (1920s and 1950s), people gradually become more risk-friendly, and draw down their high inventories of banknotes and bank reserves. People trust banks more, and are willing to hold larger deposit balances rather than banknotes. Banks gradually increase the proportion of interest-bearing loans on the asset side of their balance sheets. Thus, the demand for base money declines even as nominal GDP is growing quickly. The result is that base money tends to be flattish, even though there is a lot of economic growth.
Let's see what I am talking about:

Here is the monetary base in Britain during World War I. There was a huge increase, basically a tripling from 200 million Pounds to a peak of 600 million.
The British Pound floated after the outbreak of war in 1914, but it did not float very much, losing perhaps 30% of its value by the end of the war. This was remedied after 1919. We see that base money growth is very flat during the 1920s, although the economy was recovering.
We can also see that the devaluation of 1931 was not at all related to base money growth. This might seem rather perverse: there was huge "money printing" during the war but no real consequences, and no "money printing" at all in 1931 but a huge decline in currency value. I talk about these kinds of things at some length in my book Gold: The Monetary Polaris, with examples from Russia, Thailand and elsewhere.
During this World War I period, the British government actually printed banknotes of its own, bypassing the Bank of England – much like the US Treasury Notes ("greenbacks") during the Civil War. It was not until the 1920s that these banknotes were integrated on the BoE's balance sheet.

Here is Britain during World War II. Again, the British Pound was effectively a floating currency, and it did effectively lose some value during this time, but not a whole lot.
For the general public, concerned with other things, it was not very relevant. We see again a huge rise in base money, again roughly a tripling, and another flattish period in the recovery afterwards.
In the US, we do not have a monopoly central bank, but the pattern is about the same during World War I. During the Great Depression and World War II, there is a long period of expanding base money demand. There was a devaluation in 1933, but this was basically a product of increased demand for bank reserves, which we have looked at in some detail before. Base money then expanded even more during World War II, basically for the same reasons.
I like to look at the reserves/asset ratio of banks, but the reserve/deposit ratio is almost the same thing. During this pre-1960 period, deposits were typically about 90% of assets, so a reserve/deposit ratio of 20% is about the same as a reserves/asset ratio of 18%. We can see that banks tended to hold a lot of reserves (a form of base money) during difficult periods, and then they would draw it down and reach for more interest-bearing loans in prosperous periods. 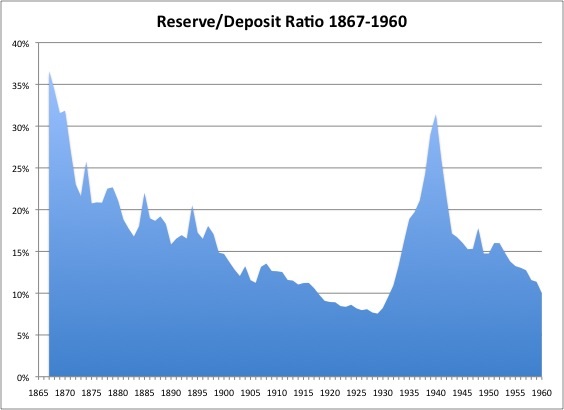