END_OF_DOCUMENT_TOKEN_TO_BE_REPLACED

BACK IN 1990, a new tech start-up was spun out of Apple to invent the future, writes Frank Holmes at US Global Investors.

General Magic, as it was called, was a veritable dream factory.

Over the course of its 12-year existence, its founders – former Apple engineers who had helped bring the original Macintosh computer to fruition – developed technologies and applications that wouldn't be in common use for several more years.

Chief among them was a precursor to the smartphone, but more than that, the General Magic team foresaw the age of mobile computing in totality, complete with social media, e-commerce and emojis.

Alas, no one bought its products, and General Magic was forced to close shop in 2002, a couple of years before anyone was friended on "TheFacebook" and five years before Steve Jobs introduced the iPhone to the world.

Modern history is full of inventions and technologies that failed not because they were inherently flawed but because they hit the market several years too early. Before the iPad, there was the Microsoft Tablet (released way back in 2001). Before Bitcoin, there was Bit Gold (conceived in 1998).

Last month, autonomous vehicle start-up Argo AI announced it was shutting down after only five years, with financial backer Ford saying that commercialization of the technology is "further out than originally anticipated."

The question now on many investors' minds is: Will Mark Zuckerberg's metaverse project follow the same path as General Magic and Argo AI, or will it go in the direction of the iPhone?

Ever since Zuckerberg announced his company's pivot more than a year ago (he would officially change the name from Facebook to Meta Platforms in October 2021 to reflect the new emphasis), the way forward has been challenging at best.

Over the past couple of years, Meta has generated billions of Dollars in free cash flow (FCF), nearly all of it now spent on developing metaverse applications that, as of now, don't appear to be profitable. Last week the company reported FCF of only $316 million in the third quarter, down significantly from $12.7 billion at the end of 2021.

The market has not been kind.

A day after Meta's earnings call, when Zuck asked investors for "patience", shares of the company plunged a jaw-dropping 25%, its third-worst trading session ever. For the year, the stock is down more than 71%.

Briefly a $1 trillion company alongside fellow FAANG stocks Apple, Microsoft, Alphabet and Amazon, Meta is no longer in the top 30 largest companies, its market capitalization having fallen to around $250 billion. In just 13 months, Zuck's net worth has dropped by an unbelievable $100 billion. 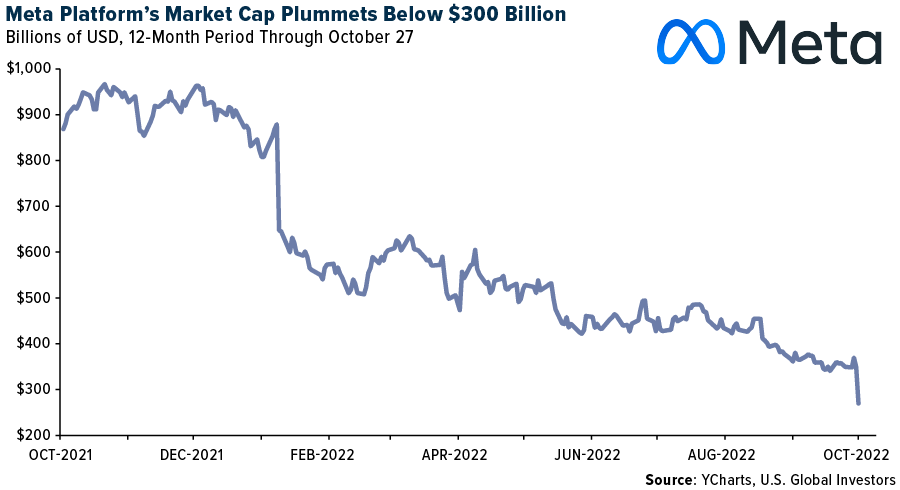 Of course, none of this should matter much if you believe in the long-term opportunities that the metaverse may present over time.

According to one estimate, a quarter of all people will spend at least one hour a day in a metaverse of one kind or another for work, entertainment or shopping by 2026. If that's the case, Meta's stock may look very attractive at its current price of under $95.

At the same time, there are signs that spending in the metaverse is stalling substantially. Prices for non-fungible tokens (NFTs) have collapsed, while sales fell 60% from the second to third quarters. Virtual worlds trading volume fell close to 92% between quarters, according to DappRadar.

Like others, I believe this slowdown is a result of our coming out of the pandemic. When we were all stuck at home, the idea of exploring virtual worlds was very inviting, and many young people were looking for ways to spend their government "stimmy" checks. Now, people may be more inclined to spend their money on analog experiences such as eating out, travel, live shows and more.

For investors who are still on the fence about Meta, it may be instructive to remember the last time a tech giant made a massive, ill-advised bet on a technology outside of its core discipline. When Jeff Bezos first came up with the idea for Amazon Web Services (AWS) many people called it risky and foolish. A 2006 BusinessWeek article was highly critical of the cloud computing project and suggested there would be no significant returns for many years to come.

Fast forward to today, and Bezos now has a framed copy of that magazine "as a reminder". In May, he tweeted that the service Wall Street initially scoffed at generated $62 billion in revenue in 2021. 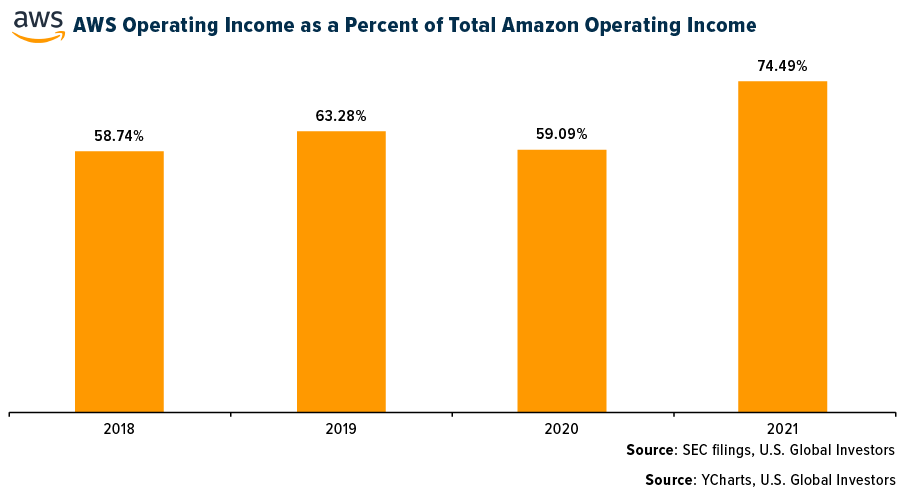 Bezos has always kept his eye on the future. In his very first letter to shareholders in 1997, he stressed that "it's all about the long term" and promised to make "bold rather than timid investment decisions."

In 2005, he acknowledged that while these new investments were "expensive in the short term," he believed them to be "important and valuable in the long term." In 2012, he pushed back against criticisms that the company's "heavy investments" in AWS and Prime were "at odds with being a for-profit company." He added: "Take a long-term view, and the interests of customers and shareholders align."

The same could be said about Zuckerberg's pivot into the metaverse. Time will tell, but I think that as long as Meta can stay afloat until the appetite for the metaverse catches up with the technology, shareholders' interests could also eventually align with Meta customers' interests.