END_OF_DOCUMENT_TOKEN_TO_BE_REPLACED

Why are so many people acting like this meltdown in finance and banking is a surprise...?

NO ONE CAN DENY that the last week has been one of the most tumultuous in modern financial history, writes Olivier Garret, CEO of Casey Research.

The streets red with blood...and the bodies of the dead and dying strewn about where they fell...in the stock market, at least. You already know the names: Lehman, Merrill, AIG, Fannie and Freddie.

But none of this happened by accident. The warning signs have been all around us for years.

Bud Conrad, chief economist here at Casey Research, wrote about the beginnings of our current problems back in March of 2007...before most people were even aware of the storms brewing just over the horizon.

"Faced with historic levels of debt, falling housing prices, and weaker economy, the pressure on housing would gain momentum as desperate homeowners either hand their keys back to the banks, or simply hit the bid on the best (low) offer they can get. A vicious cycle would set in, threatening to shove the economy into uncharted and unpredictable waters.

"The impending calamity – mass housing foreclosures, failing banks, Fannie Mae and Freddie Mac in ashes, millions of personal bankruptcies – is so dire...most people can't even conceive of it. And indeed, it may not hit us this year, or next, but the market always corrects itself, and this time will be no exception – sooner or later...That's why the coming crisis is so predictable: there's no way to avoid it."

I actually wish that his analysis had been flawed.

I also wish that the government officials had been right who have consistently claimed since then that the subprime crisis was contained and the markets would rebound in the second half of the year.

Unfortunately, this is not the case.

The Fed's recent attempts at quick fixes have not worked, and current events are reinforcing what Bud Conrad prognosticated almost two years ago: that this is much more than a normal cyclical correction. This is a disaster of biblical proportions.

As the Fed and the Treasury continue to intervene in the market, they continue to lose ground and credibility, caught between a sharp recession and strong inflationary pressures. In an effort to bail out the financial sector, they have no choice but to start injecting hundreds of billions in liquidity into a contracting market place.

This will contribute to the creation of a stagflation period that will make the '70s look like a tea party.

The Fed's never-ending injection of liquidity into the market has, and will continue to, devalue the Dollar.

Ordinarily, a country threatened with currency collapse would lean toward tight money, perhaps contracting its domestic money supply. That would push interest rates upward and compensate foreigners for holding on to the currency despite the depreciation risk. And it would soften that risk.

But this time, things aren't ordinary...there is a difference that has turned what might otherwise be a disturbance into a disaster: the US economy's inability to endure high interest rates.

The housing bubble fueled a blockbuster business in first mortgages, and then home equity loans. Homeowners drew down their equity to splurge on consumer goods, including shiploads of imports.

The relative attractiveness of US financial instruments kept the game going into overtime. The foreigners who received all those US dollars put them back into US Treasury bills and other Dollar-denominated instruments, thereby underwriting low interest rates for all US borrowers.

The net result? Foreigners funded our housing boom. The amount of mortgage growth annually matched the amount of trade deficit, which foreigners dutifully invested back into the US.

And subprime lending was no mere sideshow. It was big business. In 2005, it accounted for 25% of all new mortgages – about $600 billion of high-risk paper, most of it with adjustable interest rates.

The collapse of the subprime market soon spread into other mortgage sectors...and the derivatives created on top of all those subprime mortgages made everything much worse. Given that the annual GDP of the US economy is just $13 trillion, the $250 trillion in derivatives should have been seen as an accident waiting to happen.

Foreign reinvestment is part of the system of US debt, and we are already seeing a significant impact, as depicted in the chart below. 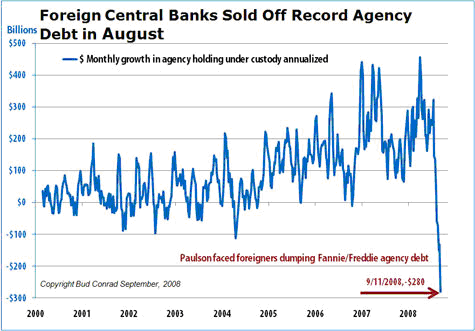 As foreign investors watched the collapse of the US housing markets, and the relative values of their debts began to sink, they quickly moved out of US debt, particularly Fannie/Freddie obligations.

This massive exodus of foreign cash out of the debt of Fannie/Freddie prompted the biggest stock market fall since the days just after 9/11. On September 15, 2008, Treasury Secretary Paulson injected the biggest amount of daily liquidity since 2001, a whopping $70 billion in just one day.

And now the government is proposing an additional infusion of approximately $1 trillion. More than the total cost of the Iraq War.

To put this amount into perspective: if you had spent $1,000,000 a day, from the birth of Christ until today, you would have only spent about 732 billion dollars.

It's going to be interesting to see what happens to our markets as this proposal goes through.

But if you had known all this was happening, what would you have done differently? And what might you want to do today to defend against, and even profit from, the ongoing mess...?