END_OF_DOCUMENT_TOKEN_TO_BE_REPLACED

This slump in US media stocks cost 10x the gold 'crash' for China and India...
THERE'S no other way to put it, says Frank Holmes at US Global Investors.
Commodities took it on the chin last month.
July was the seventh worst performing month for the S&P Goldman Sachs Commodities Index, going back to January 1970. Crude oil saw its steepest monthly loss since October 2008. Both copper and aluminum touched their lowest levels in six years.
And on July 19, possibly as a result of deliberate price manipulation, gold experienced a mini flash crash, sending it down to five-year lows.
Regardless, several commodities are beating the exchange-traded funds that track them for the one-year period, according to the Wall Street Journal. Our Gold and Precious Metals Fund (USERX) is over 1,900 basis points ahead of the Market Vectors Gold Miners ETF (GDX) year-to-date.
But that hasn't stopped many gold bears from using this as an opportunity to disparage the yellow metal. A recent Bloomberg article points out that the gold rout has cost China and Russia $5.4 billion, an amount that would sound colossal were it not for the fact that US media companies such as Disney and Viacom collectively lost over $60 billion for shareholders in as little as two days last week.
Below are the weekly losses for just a handful of those companies. Compared to many other asset classes, gold has held up well, even after factoring in its price decline. 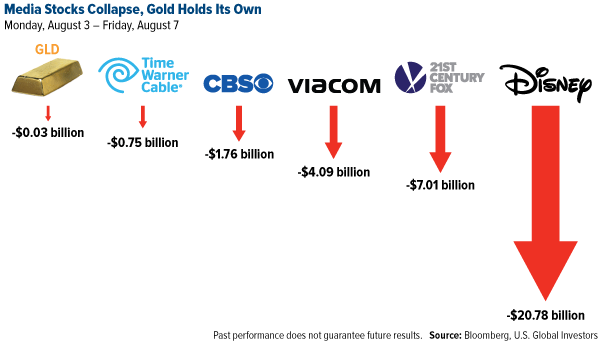 And isn't it funny that the Federal Reserve doesn't keep other countries' currencies, but it continues to hold gold – and in larger amounts than any other central bank?
China and Russia have two of the biggest gold reserves in the world – and have added to them recently – but they don't come close to the Fed's holdings, even when combined. What's more, the US Treasury's Office of the Comptroller of the Currency just classified gold as money by placing gold futures in the foreign exchange derivatives classification.
Indeed, central banks all over the world continue to add to their gold reserves. If the metal were as valueless as a pet rock, as one Wall Street Journal op-ed recently claimed, why would they bother to do this?
A few weeks ago, China disclosed the amount of gold its central bank holds for the first time in six years. Global markets reacted negatively that the country increased its reserves "only" 57%. But the World Gold Council (World Gold Council) saw this as positive news:

"We believe the People's Bank of China's confirmation of its revised gold holdings is supportive for the gold market. It reiterates how China, along with other central banks, views gold as a key resource asset as it continues to seek diversification away from the US Dollar."

As I've said before, China is the 800-pound commodities gorilla. This has largely been the case since 2000.
Between 2002 and 2012, China was growing fast at an average annual pace of around 10%. The country was responsible for nearly all of the net increase in global metals consumption between 2000 and 2014, according to the World Bank. Over the same time period, its share of metals consumption tripled, eventually reaching an astounding 47%.
The year 2014 was a standout for Chinese commodity imports. Compelled by low prices, the country, which accounted for 12% of worldwide imports, brought in record volumes of crude oil, iron ore, copper and other raw materials.
Because China is a trading partner with practically every other country, and because it imports over $500 billion a year in commodities, its importance in global trade cannot be stressed enough. BBVA Research writes that "any reduction in its level of [purchasing] activity places significant downward pressure on the prices of [commodities], such as oil or copper."
And yet we're seeing that reduction now. For the past five months, China's purchasing managers' index (PMI) has remained below the neutral 50 mark, indicating that its manufacturing sector has been in contraction mode for the better part of this year so far.
It's important to keep in mind that China is still the number one importer of many key materials, including coal, iron ore and crude oil. The country's import growth of these commodities continues to rise, but at a slower pace than in years past.
This isn't necessarily the case with gold, however.
According to the World Gold Council, the decline in Chinese gold demand has been overstated.

"Although China's jewelry demand in the first quarter of 2015 was down from the record level the previous year, it was 27% higher than its five-year average. And consumer demand – jewelry plus bar and coins – in the first quarter was the fourth best on record, surpassed only by the surge in demand triggered by the price fall in 2013."

The World Gold Council also points out that gold has a low correlation with and different demand drivers than commodities. Whereas commodities, as expressed by the Bloomberg Commodities Index, have returned to 2001 levels, gold is still up significantly for the period shown in the chart below. 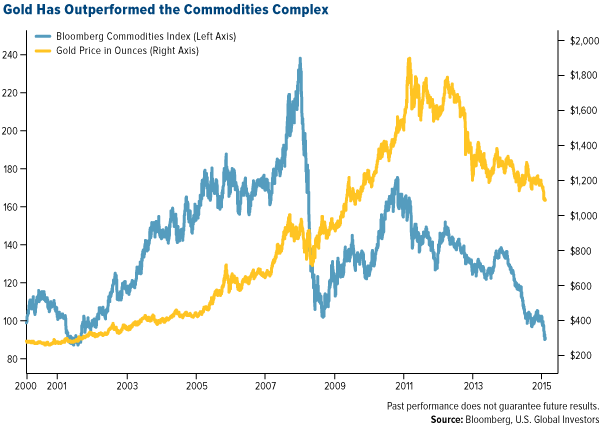 I call gold's drivers the Fear Trade and the Love Trade.
The Fear Trade, dominant in the psyche of North America, involves money supply growth and real interest rates. Whenever the US has negative real interest rates, gold starts to rise in Dollar terms, and whenever we have positive real rates of return, it starts to decline. If you go back to 2011, we had negative real interest rates off 3% on a 10-year government bond, and the average gold price that year was around $1,500 per ounce. But now that rates are positive 2%, the metal's been depressed.
The Love Trade includes the purchase of the precious metal due to cultural affinity and rising GDP per capita in Asia and the Middle East. This includes gift giving of bullion and gold jewelry in anticipation of upcoming festivals such as Diwali, Christmas and the Chinese New Year.
Historically, the Love Trade has begun to pick up around this time of the year.
Gold is a long-term investment with long-standing tradition. This remains true even now that prices have declined. As always, I recommend a 10% weighting: 5% in gold stocks, 5% in bullion or jewelry, then rebalance every year.