END_OF_DOCUMENT_TOKEN_TO_BE_REPLACED

Government debt, that is. "Unfortunately, that's the only solution." And the most unlikely.

And what do we have to show for it?

"We had less debt cumulatively [two years ago]," Taleb says, "and more people employed. Today, we have more risk in the system, and a smaller tax base.

"Obama promised us 8% unemployment through stimulus," he continues. "It hasn't worked. It's not that they [the administration] make mistakes, it's that they almost get nothing right."

The result of this – both here and abroad – is what one of Bill Gross' top lieutenants at Pimco calls a "Keynesian endpoint".

The notion of solving debt problems with more debt is increasingly "being seen as a magic elixir that has morphed into poison," according to an e-mail note this week from Anthony Crescenzi.

"Time, devaluations and debt restructurings might be the only way out for many nations."

Perhaps the US stock market senses this on some subconscious level, which is why it's exhibiting the sort of financial bipolar disorder we've diagnosed the last couple of weeks. Last week brought us another manic episode, propelling the major indexes up nearly 3% and the Dow past 10,000 again, for no obvious reason.

Then, another depressive episode struck after the Commerce Department reported a 1.2% drop in retail sales from April to May...the first drop in eight months. This is another one of those "unexpected" numbers that are increasingly whacking traders upside the head. In this case the numbers were "much worse than expected," according to MarketWatch.

So where from here? Well, consider this... 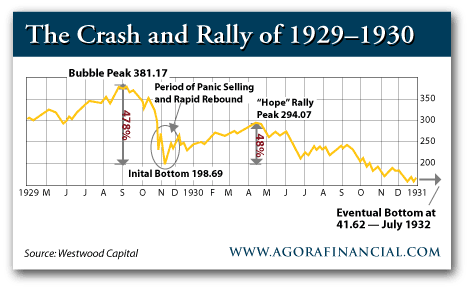 The folks at Westwood Capital put together these nifty charts with two commonalities – a bubble peak and a period of panic selling followed by a rapid rebound. You'll also see what may turn out to be a third commonality – the rebound petering out in April 1930, and perhaps doing the same in April 2010. 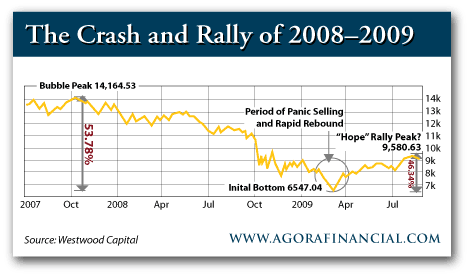 Obviously, there are differences. In '29, it took only three months to go from peak to trough. This time, it took nearly 18 months. As Mark Twain said, history doesn't repeat, but it does tend to rhyme.