END_OF_DOCUMENT_TOKEN_TO_BE_REPLACED

What matters vs. what all-too-human humans crave...

The MEANDERINGS of the financial markets must often seem quite arbitrary to observers, writes Tim Price on his ThePriceOfEverything blog.

One of the central theses of Yuval Noah Harari in Sapiens is that humans have climbed to the top of the evolutionary ladder by way of a predilection for story-telling. We want to make sense of things, and so we crave a narrative, ideally a linear one which proceeds according to the principles of logic.

There is a natural demand on the part of investors and uninvolved onlookers alike to make sense of the apparently impenetrable. To account for the otherwise baffling Brownian motion of asset prices, financial media step in to "help" fill the void.

There is just one problem with the financial media's "explanations" of price activity in markets.

They are all nonsense.

Thomas Schuster of the Institute for Communication and Media Studies at Leipzig University takes up 'the story':

"Most of these explanations are post-hoc rationalizations. An artificial logic is created, based on a simplistic understanding of the markets, which implies that there are simple explanations for most price movements; that price movements follow rules which then lead to systematic patterns; and of course that the news disseminated by the media decisively contribute to the emergence of price movements."

But if the ducks are quacking, we cannot fault the financial media for wanting to feed them.

"NEW YORK – The S&P 500 closed at a new high on Wednesday in what analysts hailed as the accumulated result of several hundred million people waking up every morning hoping to solve problems and improve their lives.

"The index finished up 4 points. Goldman Sachs strategist Bill Blake said the move was the result of unidentified marginal buyers being a little bit more motivated than unidentified marginal sellers. 'We've now had 241 years of people in daily competitive pursuits to do things a little better, and those benefits add up over time. Mix that with some good luck and where we happen to be in the business cycle, and here we are,' he said. 'My job is to sound smart, but you can explain this stuff to a five year old,' he laughed.

"Corporations earned $5.89 billion in after-tax profits. Financial advisors and middlemen took in $710 million in fees. The difference, Blake said, would accrue to investors over time. Analysts warned of several metric tons of dopamine and cortisol careening through the global economy, which they said created a near certainty of poor financial decisions.

"At some point, Blake said, these bad decisions create social proof and feed on each other, leading to recessions. 'When is the next recession?' he asked. 'I don't know. Whenever the second mortgage you took out to buy a boat to appease your insecurity convinces your brother in-law to do the same, and his boat gives the boat salesman enough misguided confidence to become a day trader, and then all three of you crack under a collective bout of geopolitical bad luck or something. But we'll move on.'

"About 9,000 new businesses formed on Wednesday. Another 8,200 dissolved. Analysts expect the trend to continue, calling it an 'unmistakable example of basic capitalism'..."

Meanwhile US stocks continue to climb their wall of worry to new all-time record highs, and former Fed chairman Alan Greenspan frets that the bubble in bonds is about to burst, which it may well be.

Yet none of this really matters. Asked to distill the secret of sound investing into three words, the great value investor Benjamin Graham offered the phrase "Margin of Safety".

Faced with the same challenge, we offer a graph. 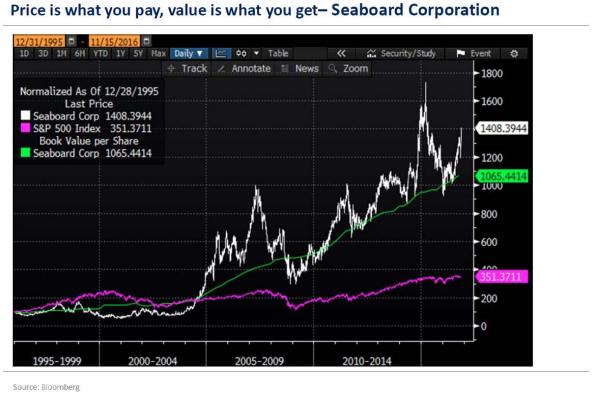 Perhaps the most interesting line, however, is the green one, which shows the growth in the book value per share of Seaboard Corporation.

First lesson: look for companies run by principled, shareholder-friendly management who are adept at capital allocation. Seaboard, which we own in our fund, is, we believe, one of such companies – a diversified international agribusiness with interests in food processing and milling.

Second lesson: over time, growth in a company's inherent value (eg, its book value) will tend to track the growth in its share price. But as the chart shows, this relationship can be lumpy, and volatile.

Third lesson: only buy the shares of such companies when they can be purchased at close to, or ideally below, book value. Margin of safety, again.

So why are you still reading the business news?