END_OF_DOCUMENT_TOKEN_TO_BE_REPLACED

ONE of the harder economic concepts to embrace is that tax revenues, as a percentage of GDP, are often lower when rates are higher, and higher when rates are lower, writes Nathan Lewis of New World Economics in this article first published at Forbes.

The reason is that high rates have a multitude of effects, among them: people do not engage in highly-taxed activities; and there is inevitably intense pressure upon the political system to create all sorts of exemptions and exclusions, so that more activity is taxed at a lower rate, or untaxed.

More revenue, at half the rate. 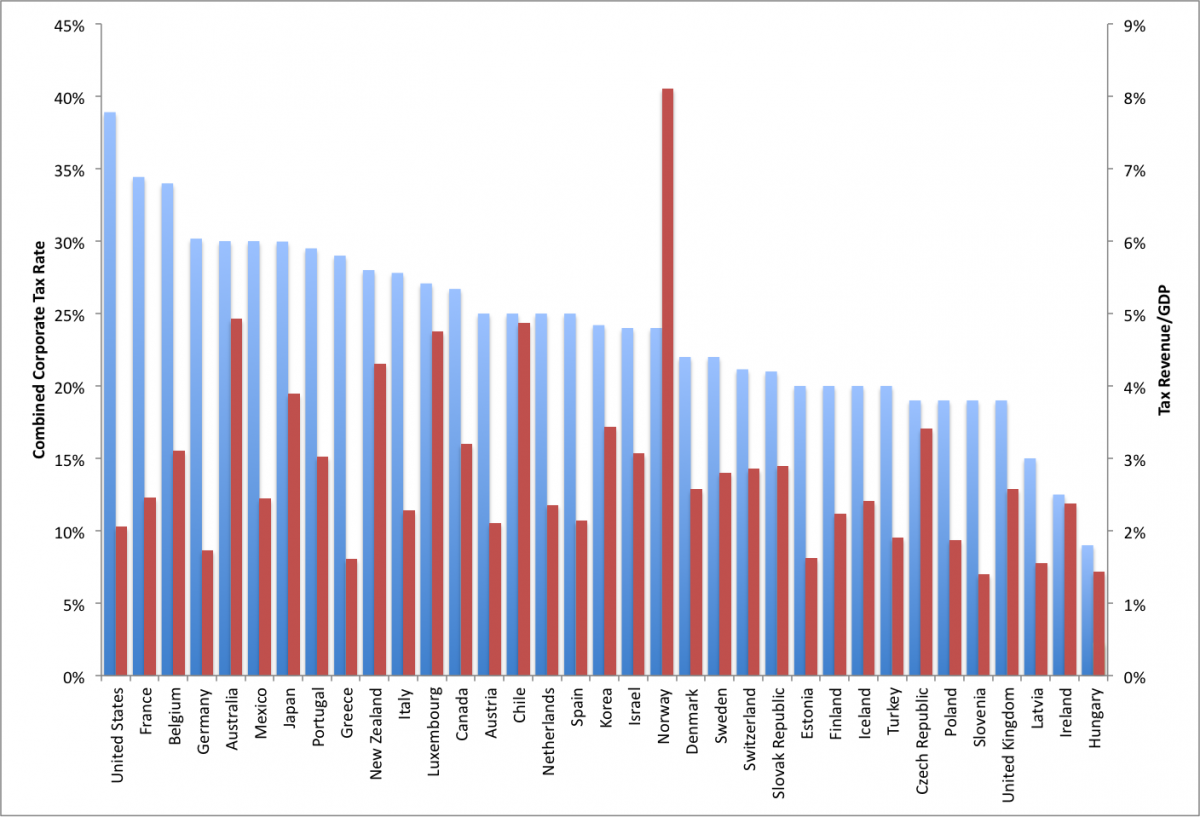 A common initial reaction is: "Oh, that's so unfair! We absolutely cannot reduce the corporate tax rate, because corporations aren't paying their fair share as it is!"

Another reaction is: "We must keep the high rates, and also reduce the exemptions and exclusions, and generally 'crack down' on tax avoidance!"

Once you get over this initial reaction, and stop and think for a while, you can see that the accumulation of exemptions and exclusions, and every other sort of tax avoidance, are a natural consequence of the high rates, and you will never be able to do anything permanent about the problem until you reduce the rates.

So, let's say that we reduce the Federal corporate tax rate to 15%, producing an overall rate of about 19% – the same as Britain. We could then have a long debate about exemptions and exclusions.

We could reduce exemptions and exclusions right away, as part of the tax reform. We could reduce them later. We might not do much at all, and find that revenues increase anyway. Why? Because, at a lower rate, there would be more activity that is taxed at the full rate, rather than having lots of activity channeled into tax shelters. People would calculate: "This activity is sheltered, but that unsheltered activity would make be a bigger profit. At a 40% rate, I'll take the tax-free shelter, but at a 19% rate, I'll take the fully-taxed activity."

One of the most popular "shelters" these days is to leave the country and domicile overseas. A competitive tax rate would remove the motivation for that – and the corporation would pay the full rate, rather than nothing at all.

Probably, the best thing would be to implement a full "flat tax" reform – the corporate half of the "flat tax" proposals that have already been worked out in detail. Personally, I like Steve Forbes' version, described in The Flat Tax Revolution (2005). This would eliminate huge counterproductive swathes of the tax code, and probably produce much more revenue – perhaps as much as 3.5% of GDP, as demonstrated by Hong Kong, with its 16.5% rate.

This might seem like too much for today's wishy-washy Congress, but as the debates on revenue loss and exemptions drag out, people might find it is easier to Go Big – to cut the Gordian Knot with one stroke.

My only hesitation here is that the 15% Federal rate (19% combined) might be too high – a 10% Federal rate (14% combined) could be better, and still generate more revenue, just as Ireland's 12.5% corporate rate generates 2.4% of GDP – more than the US I sense that big corporations would balk at losing their existing tax breaks at a 19% combined rate, but might be happy at 14%.

Plus, we should introduce territorial taxation, like the rest of the world, and eliminate the present worldwide double-taxation system. We should also allow immediate expensing of capital investment. I think corporations would jump at that combined offer.

We could go further: Hungary, at the far right of our chart, has a 9% combined rate with a simplified "flat tax" system, and gets 1.44% of GDP in revenue. That's 0.6%-of-GDP less than the US But, the increased growth from such a low rate in the US (5% Federal, 9% combined) would make up for the revenue shortfall in about five years. After that, it's all gravy – bigger GDP would produce more revenue, even at a lower revenue/GDP ratio. (In this example, Federal revenues might be low, because they would only be five-ninths of the total revenue. An 8/1 split would better mirror today's Federal/State revenue distribution.)

These kinds of results are way outside the supposed realm of possibility suggested by some "experts". The Tax Policy Center recently calculated that if all "tax expenditures" including exemptions and deductions were eliminated (in effect, a Flat Tax), the "revenue neutral" rate would be 26% for corporations.

Hello? Britain is getting more revenue at 19%, and Ireland is getting more at 12.5%, along with many other, similar developed countries, and that's the best you can do? That's why I say: look at reality, and forget about the "experts".

Plus, we would get all the benefits of even greater growth – more investment, more and better jobs, rising wages and profits. We would go a long way to resolving the capital/labor ratio imbalance that I see as the root cause of many of the US's problems today. Capital goes where it is treated well, and the US would be one of the most capital-friendly places on Earth.

This would reduce all kinds of pressure related to "economic nationalism". A healthy economy would make it easier to reduce government spending.

There is another aspect of this: implementing what amounts to a Flat Tax for corporations, and then demonstrating what a big improvement it is, sets the stage for a similar reform of individual income taxes. It would be a nice agenda item for president Trump's second term – a virtual certainty if such a tax reform could be implemented, as long as he doesn't make a mess with foreign policy.