END_OF_DOCUMENT_TOKEN_TO_BE_REPLACED

The developed world has seen rates like this before...

"AT NO POINT in the history of the world has the interest on money been so low as it is now."

For lo eight years, the Federal Reserve has waged a ceaseless warfare upon interest rates.

Economic law, history, logic itself, stagger under the onslaughts.

We suspect that economic reality will one day prevail.

This fear haunts our days...and poisons our nights.

But let us check the date on the senator's declaration...

We are reliably informed that Sen. Teller's comment entered the congressional minutes on Jan. 12...1895.

1895 – some 19 years before the Federal Reserve drew its first ghastly breath!

Were interest rates 122 years ago the lowest in world history?

And are low interest rates the historical norm...rather than the exception?

Today we rise above the daily churn...canvass the broad sweep of history...and pursue the grail of truth.

The chart below – giving 5,000 years of interest rate history – shows the justice in Teller's argument. 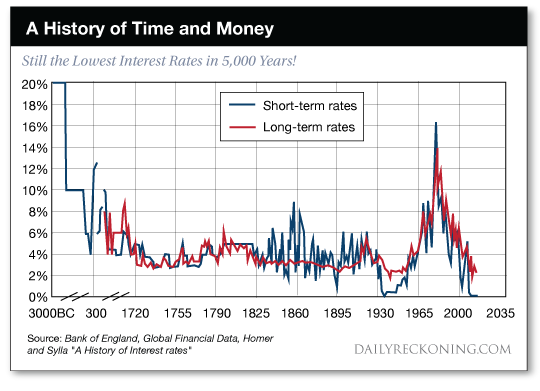 Rates had never been lower in all of history.

They would only sink lower on two subsequent occasions – the dark, depressed days of the early 1930s – and the present day, dark and depressed in its own right.

A closer inspection of the chart reveals another capital fact...

Absent one instance at the beginning of the 20th century and a roaring exception during the mid-to-late 20th century, long-term interest rates have trended lower for the better part of 500 years.

Paul Schmelzing professes economics at Harvard. He's also a visiting scholar at the Bank of England, for whom he conducted a study of interest rates throughout history.

Could the sharply steepening interest rates that began in the late 1940s be a historical one-off...an Everest set among the plains?

"Interest rates are a function of strong, organic, economic growth that leads to a rising demand for capital over time."

In this view, rates rose steeply at the dawn of the 20th century because rapid industrialization and dizzying technological advances had entered the scenery.

"There have been two previous periods in history that have had the necessary ingredients to support rising interest rates. The first was during the turn of the previous century as the country became more accessible via railroads and automobiles, production ramped up for World War I and America began the shift from an agricultural to industrial economy.

"The second period occurred post-World War II as America became the 'last man standing'...It was here that America found its strongest run of economic growth in its history as the 'boys of war' returned home to start rebuilding the countries that they had just destroyed."

Let the record show that rates peaked in 1981...and have declined steadily ever since.

Does that mean our best days are in back of us?

And was this post-World War II period of dramatic and exceptional growth...itself the exception?

"But just maybe," he concludes, "we have really returned to the old normal."

Very low rates have often persisted for decades upon decades, pretty much whenever inflation is quiescent, as it is now...The real aberration looks like the 7.3% average experienced in the United States from 1970-2007.

"We're returning to normal, and it's just taken time for people to realize that," adds Bryan Taylor, chief economist of Global Financial Data.

Granted, drawing meaningful comparisons between historical eras can be a snare, a chimera, the errand of a fool if done carelessly.

And the case presented today may carry enough reasonable doubt to hang a jury.

But maybe today's low rates aren't as outrageous as originally strikes the eye.