END_OF_DOCUMENT_TOKEN_TO_BE_REPLACED

...and from Mexico's Peso crisis too...
I CAN'T SAY say that I properly understand what the central bank of Turkey has been doing, says Nathan Lewis at New World Economics.
But it doesn't matter much anyway. In the end, there is just the base money supply, and some more complicated stuff. The basic solution is the same – reduce the monetary base, by whatever amount is necessary to support the currency.
In practice, it rarely takes more than about a 20% reduction in the monetary base to achieve this goal, even in a crisis situation. Commonly, this reduction is soon reversed, since – after this display of effective currency management by the central bank – demand for the currency bounces back, and this rebound in demand has to be met with an increase in supply, just to keep the currency from rising too much!
Steve Hanke sometimes mentions the example of a currency board operated by the White faction in Russia's civil war that soon followed the Bolshevik Revolution in 1917. The currency board functioned fine, even in the middle of a civil war, in which the White faction lost. These currency-board-type mechanisms work even in the most difficult situations imaginable. The basic process is to reduce the base money supply when the currency is weak (below the target value), and increase it when it is strong (above the target value).
Since the monetary base has not been shrinking recently, but actually has been expanding quite a lot, it is not too hard to guess that this is probably the primary reason behind Turkey's difficulties today.
Let's take a look at the central bank's "analytical balance sheet," which is described as netting out certain assets and liabilities – apparently, the "gross" balance sheet is more complicated than this.

This is daily data, with about a week of recent data.
As we can see, this is really rather novel, with "negative liabilities" of considerable size. These may be accounting for derivative obligations, such as currency forwards. There are some noteworthy elements. First, the primary assets are "Foreign Assets," basically gold and foreign exchange. There are also a lot of "Foreign Liabilities" to offset these Foreign Assets, mostly domestic liabilities. There is a line for "Treasury debt," which is actually not very large. The central bank does not hold much government debt, and, apparently, has not been financing the government one way or another, although this could perhaps be accomplished discreetly with the use of derivatives or other funny business. For example, they could buy foreign exchange (USD or EUR debt), and then swap it for domestic government debt, in this way synthesizing a government debt holding.
There is a pretty large line for "credits to the banking sector." On the liabilities side, there is a lot of funny stuff, including big negative figures for "other central bank money" (negative money?) and "open market operations." But, I think that when you get to the business here, the main thing to look at is Currency Issued (237 billion Lira), and Deposits of the Banking Sector (359 billion Lira). This is the real base money, that exists "in the world," albeit somewhat ephemerally in the case of bank deposits. Also, there are the Deposits of the Public Sector, which is the government's bank account. I consider this a part of Base Money, but it is typical to exclude it, for the Base Money ex-government. Both views have merit.
In other words, we have 237+359+110=706 billion Lira of total base money, including the government's accounts. 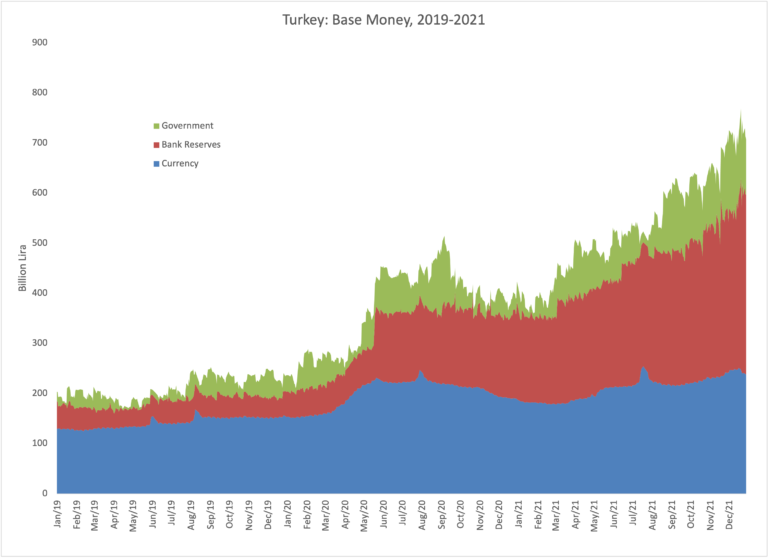 As we can see, there has been a big expansion in base money since the start of 2020, a pattern that is common to central banks everywhere. The activity in 2020 might be a matter of the implementation of Basel III reserve requirements, plus Covid-related issues. In any case, the currency did not react particularly badly to this expansion. However, the expansion since March 2021 is not so easy to justify, and is very large. Throughout all of this crisis, the central bank has been, effectively, "printing money" at an accelerated pace. They should stop doing that.
Looking at Domestic Assets including Government Debt and Credit to the Banking Sector, there was a burst of lending in November, probably related to recent unsuccessful efforts to "lower interest rates." The currency fell out of bed around this time. This looks like a "loss of faith." Not much was happening in terms of additional expansion of the base money supply, but it was evidence that the central bank was going to begin a period of destructive experimentation, which would naturally make you want to bail out from the Lira as soon as possible. This was reversed in the last few days. Nevertheless, the quantities look rather small.
Here's the TRY/USD exchange rate, with "down" showing declining Lira value (log scale). 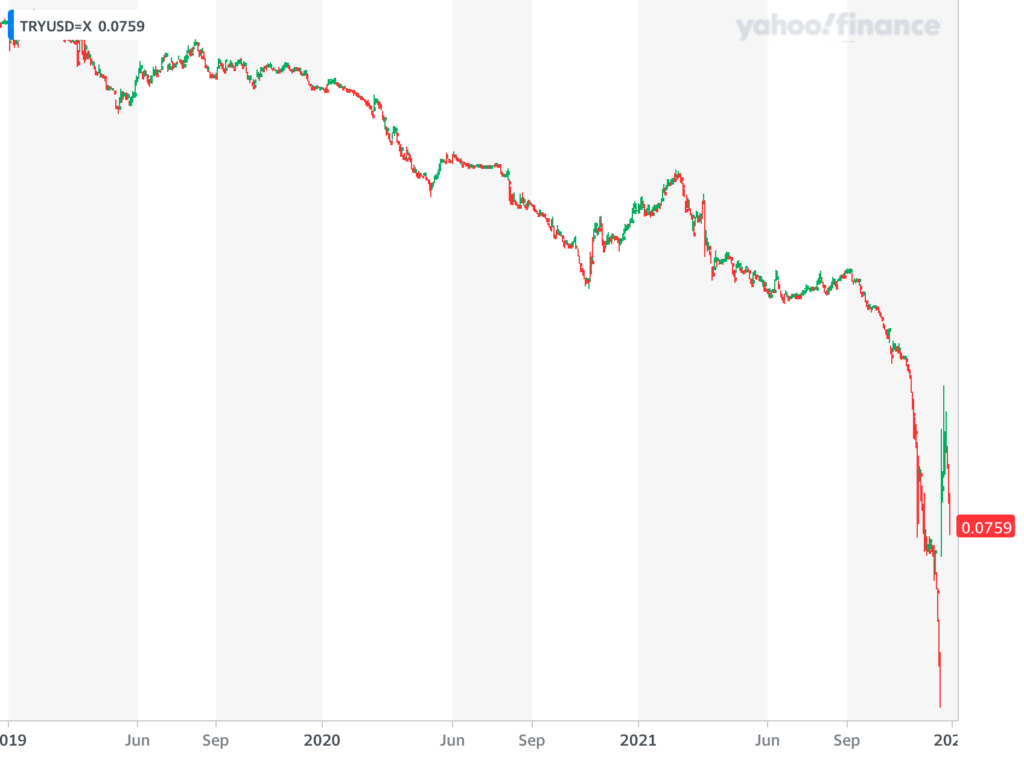 As we saw earlier, the decline in the Lira up to the middle of 2021 was actually in line with its long-term decline rate. So, that's bad, but not unusually bad, for Turkey.
Here are foreign reserves. We see a big rise, beginning around June 2021. At least on a gross basis, the central bank was buying USD and selling Lira – basically, fresh Lira that it had "printed" out of nothing. 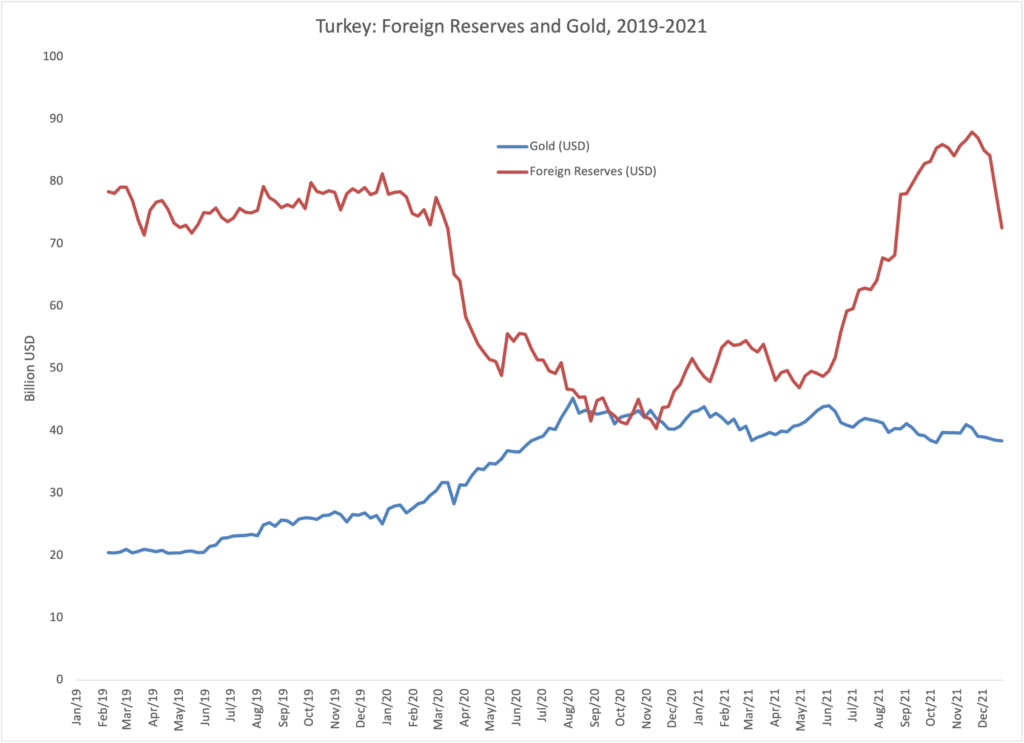 Foreign reserves then had a fall in recent weeks, due to foreign exchange interventions, but this has had no effect on the monetary base, which continued to expand. The intervention was "sterilized," and worse.
Here is some info on interest rates. Interest rates haven't risen much, which is suspicious. You can see effects of the recent experiment in "lowering interest rates," a little dip at the end of 2021. 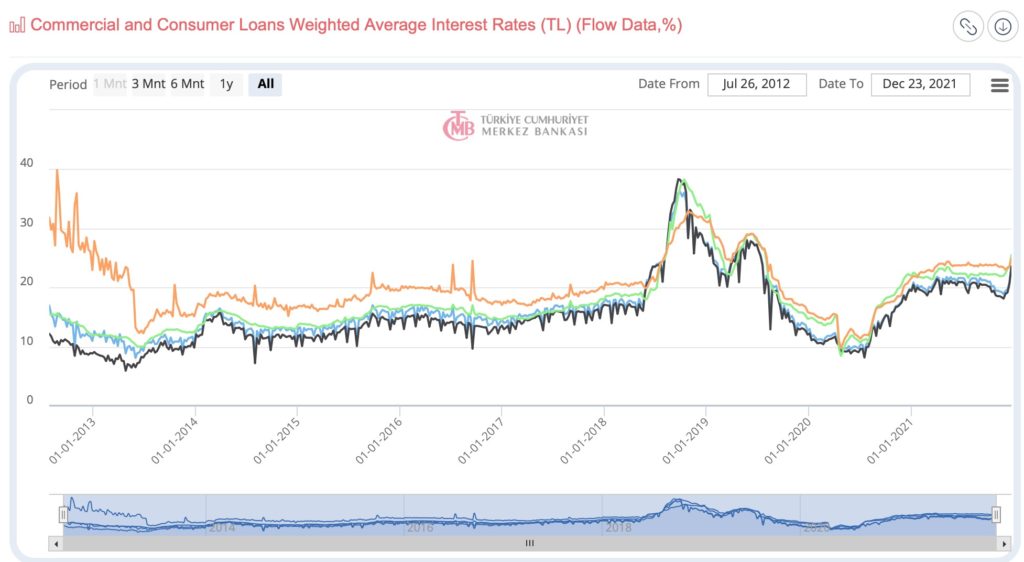 I'll let someone else delve into all this overcomplication and get an idea of what has been happening. But, it is pretty clear that the base money supply has been expanding rapidly, which is not a good idea if you want your currency to maintain its value.
Beyond quantity issues, it indicates that, in the middle of a crisis, a central bank is being rather reckless or stupid, which tends to make people run for the exits. That is when you see outcomes (currency declines) far in excess of somewhat modest incremental changes in base money.
For the short term, the base money supply should contract substantially, perhaps returning it to around its March 2021 level, which is about 36% lower from here. That is a lot, so we could begin with about a 20% reduction, which is what I normally recommend for countries in a crisis situation. Total base money of 596 billion Lira (ex-government) would, at an early-2021 exchange rate of 8/USD, be worth about $74 billion. 20% of that is about $15 billion.
Also, there are large amounts of lending to banks. I would use foreign exchange reserves of about $5 billion to buy Lira up to 8/USD, accompanied by about 80 billion Lira of contraction of "credit to the banking system," letting these typically short-term loans run off. These actions would have to be "unsterilized," producing the desired reduction in base money supply (basically, bank reserves).
I mentioned that this is what I suggested for Russia, which the central bank actually did, and it worked pretty well. This is from Gold: The Monetary Polaris: 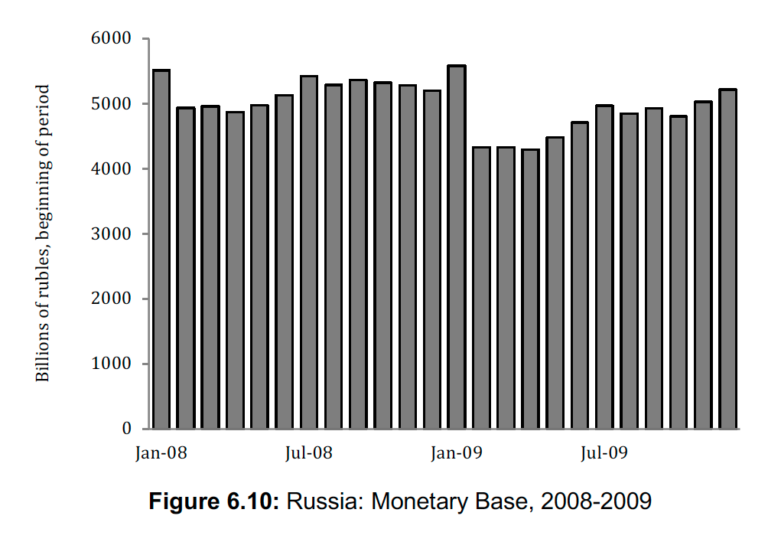 You can see the reduction in the Ruble monetary base, of about 22% month-on-month and 12% year-on-year (there is some seasonality in the monetary base).
Exactly on cue, the Ruble stopped falling, stabilized, and started rising.
Sometimes a dramatic reduction in bank reserves, as Russia's central bank did, might lead to a short-term spike in overnight lending rates. This is usually pretty harmless, and goes away in a matter of a couple days. But, that didn't happen here. Instead, interest rates were quite high when the Ruble was collapsing in value, which you would expect. But, as soon as the Ruble stabilized, interest rates collapsed under 10%.
It makes sense: If a currency has stopped falling, and even started rising, getting paid 10%+ is a fantastic deal. You're getting paid a big yield on a rising currency. People pile in to the opportunity, and interest rates fall.
So, if you want lower interest rates, stabilize the currency value. If you were to push the Lira back to about 8/USD, from about 16/USD recently, that would be an amazing situation for currency traders.
This is a similar solution to what David Malpass presented, in regards to the Mexican Peso crisis in 1995. It was in a Wall Street Journal editorial from January 11, 1995 called: "The Mexican Peso: 3.5 or Bust." In that oped, Malpass recommended raising the Peso/USD rate back to near its pre-devalution level, using methods basically identical to what I am suggesting here. (The Mexican Peso traded at 5.76/USD on January 11, 1995.)
Malpass was the Chief Economist of the brokerage Bear Stearns at the time. Today, he is the head of the World Bank. So, what I am suggesting here is actually pretty conventional wisdom, among a certain circle of people.